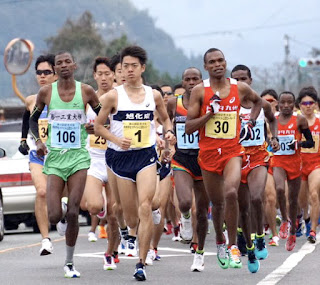 by Brett Larner
photos by @t_tsuki

Less than 24 hours after world record-setting 10000 m depth in Hachioji, another record fell at the 40th anniversary Kumamoto Kosa 10-Miler.  Expectations were high that the talented Kenta Murayama (Team Asahi Kasei) would follow up on his twin brother Kota's 10000 m national record in Hachioji by breaking the 45:40 Japanese 10 mile national record set back in 1984, almost a decade before the Murayamas were born.

Running alone Karemi couldn't sustain his course record pace but had no trouble taking a second-straight win.  His time of 45:19 was 32 seconds better than last year and the seventh-best winning time in Kosa history behind only Martin Mathathi (Suzuki Hamamatsu AC), Samuel Wanjiru (Team Toyota Kyushu) and Gideon Ngatuny (Team Nissin Shokuhin).  Not bad company to be in. 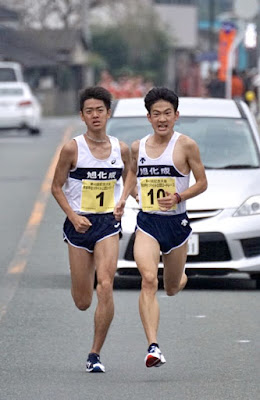 Pursuing Ndungu, Murayama and Mogi fell off Japanese NR pace, and with 1 km to go they found themselves mirroring yesterday's 10000 m, where Kota Murayama and his Asahi Kasei teammate Tetsuya Yoroizaka were side-by-side all the way to a photo finish separated by only 0.05 seconds.  This time it was Mogi's turn, though, as he got Kenta Murayama on the line for 3rd, both men clocking 46:08 to come in at #9 on the all-time Japanese list.

Next across the line was this year's top Japanese marathoner Masato Imai (Team Toyota Kyushu) in 46:36, just 1 second off his PB in his first race back since meningitis knocked him out of the summer's Beijing World Championships marathon where he had been a solid medal contender.  Toyota Kyushu runners took the next three places behind Imai, putting the Koichi Morishita-coached team into good position for the Jan. 1 New Year Ekiden corporate men's national championships.  Although not quite as good as Asahi Kasei's position with three men sub-28 yesterday and the top two Japanese men today.

The fast times continued far down the field, with a total of 107 men breaking the 50 minute mark to eclipse the previous record set in Kosa in 1998.  Like at yesterday's historic Hachioji Long Distance meet, the majority of them were using Kosa as a tuneup for the New Year Ekiden, which will be celebrating its 60th anniversary running.  With stellar quality and depth at both races look for something special indeed to happen come January 1.