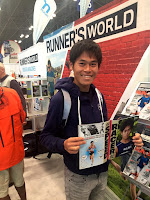 Incognito at the expo.

After two failed attempts and a year mostly lost to self-inflicted injury following a moderate ankle sprain late last December, Yuki Kawauchi (Saitama Pref. Gov't) turned in his best race of the year and one of the best of his career at the TCS New York City Marathon, negative splitting 2:13:29 for 6th place overall as the top non-African finisher.

Running NYC for the third time with support from JRN, Kawauchi looked strong and comfortable through the relatively slow 1:06:50 first half, rolling with the ebbs and flows of New York's unpaced, hilly race.  Coming off the Queensboro Bridge after 25 km in the lead pack for the first time in his three NYCM attempts, he stayed in contention as part of a group of eight leaders as the pace went as fast as 2:55/km heading up to the Bronx, focused and mostly free of his characteristic pained grimace. 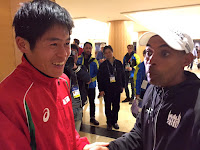 Finally losing touch when Kenyan winner Stanley Biwott's real move came, he and American great Meb Keflezighi worked together going back and forth in 6th and 7th to try to catch stragglers Yemane Tsegay (Ethiopia), this year's World Championships silver medalist, and defending champion Wilson Kipsang (Kenya).  With his famed finishing speed after 40 km Kawauchi closed to within 5 seconds of Yemane but couldn't quite seal the deal, tying the best-ever Japanese placing in New York at 6th in a negative split 2:13:29.  Keflezighi was right behind in 2:13:32, a new American masters' record.  Post-race both men credited each other with their achievements, Kawauchi saying, "If Meb hadn't been there for me I probably wouldn't have been able to push it this hard.  I owe this race to Meb."  Keflezighi commented, "I used the Japanese guy to be able to push a little bit and help each other." 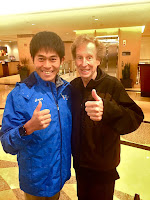 Kawauchi extremely happy to meet legend Bill Rodgers the night before the race.

Kawauchi's 6th-place finish was the best Japanese men's placing in an Abbott World Marathon Majors race this year, in a slow race short of his time goal of beating Masato Imai's 2:10:45 in New York two years ago but a major confidence builder after his long-lasting injury problems this year and with his shot at making the Rio de Janeiro Olympic team coming up next month in Fukuoka.

"The field here was as good as in an Olympics or World Championships," he told JRN post-race.  "This was the first time I've ever been able to compete as one of the leaders all the way in a race this level, right until the real move came.  I've never been there to experience it happening right before my eyes before, so this was a really important breakthrough experience.  Thank you to everyone who cheered for me during the race online, on the course, and back home."

Dan said…
Not only did he run a fantastic race, the announcers on TV did a nice job talking about him. Much better than last year.
November 2, 2015 at 10:44 AM

TokyoRacer said…
First non-African at New York is impressive, and he beat a few Africans also....
Nice that he and Meb were able to work together.
Hope he has a good run at Fukuoka - which is only 5 weeks away.
Try to keep him from running another marathon in the interim, Brett.
November 2, 2015 at 6:15 PM