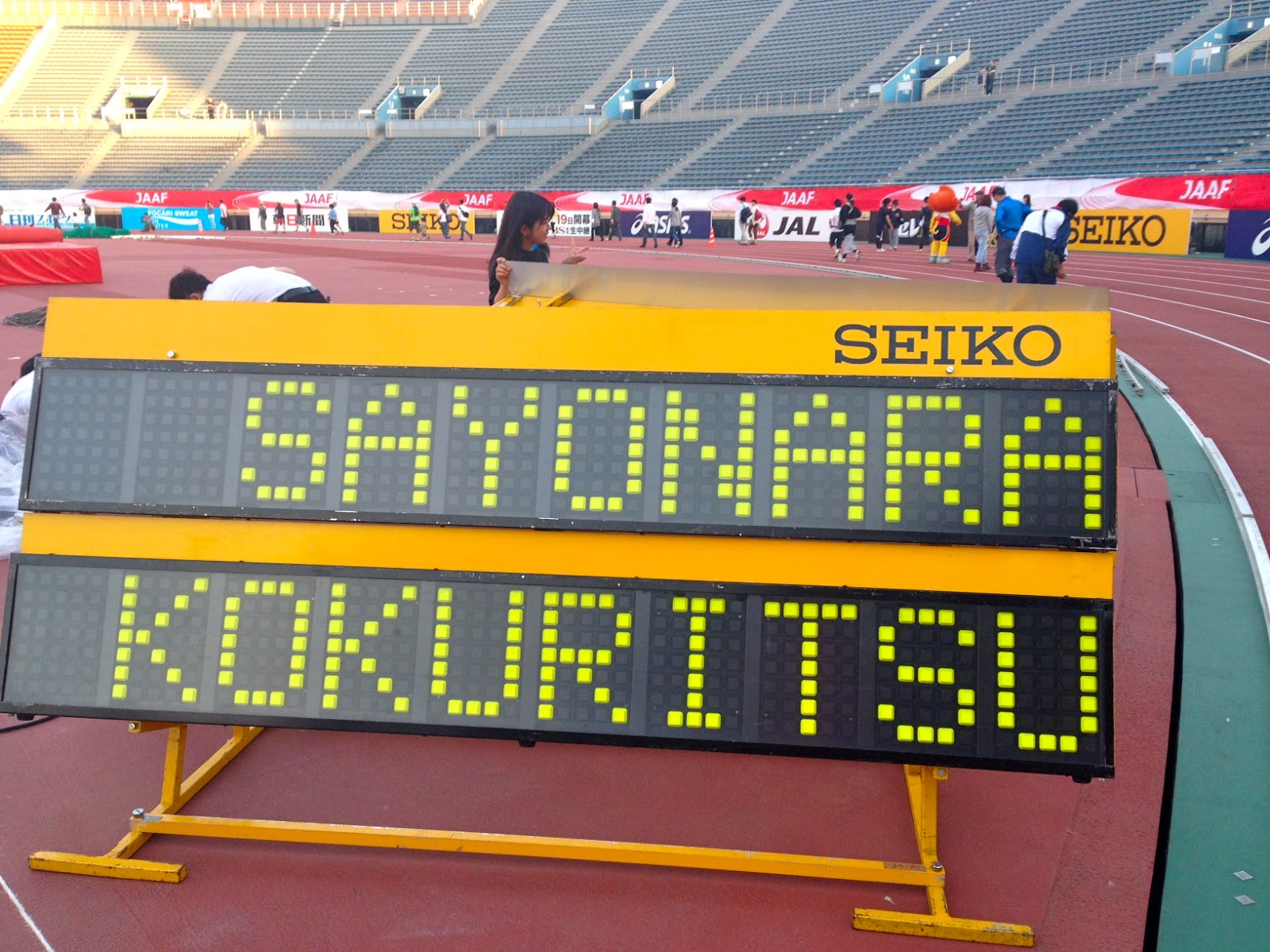 Organizers announced that 17,000 fans turned out on a spectacular spring day for the final track and field meet at Tokyo's 1964 Olympics National Stadium, Sunday's Golden Grand Prix Tokyo. Many were there to relive memories of Abebe and Tsuburaya, of Taniguchi and Yamashita's 1991 World Championships medals, and of Seko, Takahashi and Noguchi's wins at the old Tokyo International Marathon, but there's no question that the main draw was the meet-closing men's 100 m featuring Yoshihide Kiryu (Toyo Univ.) up against the likes of Justin Gatlin (U.S.A.), Christophe Lemaitre (France) and Mike Rodgers (U.S.A.). Strong winds precluded fast times as multiple medalist Gatlin duly took 1st in 10.02 (-3.5) over Rodgers and Lemaitre. Kiryu was just 5th in 10.46, but fans seemed happy to see him in action regardless of the outcome. 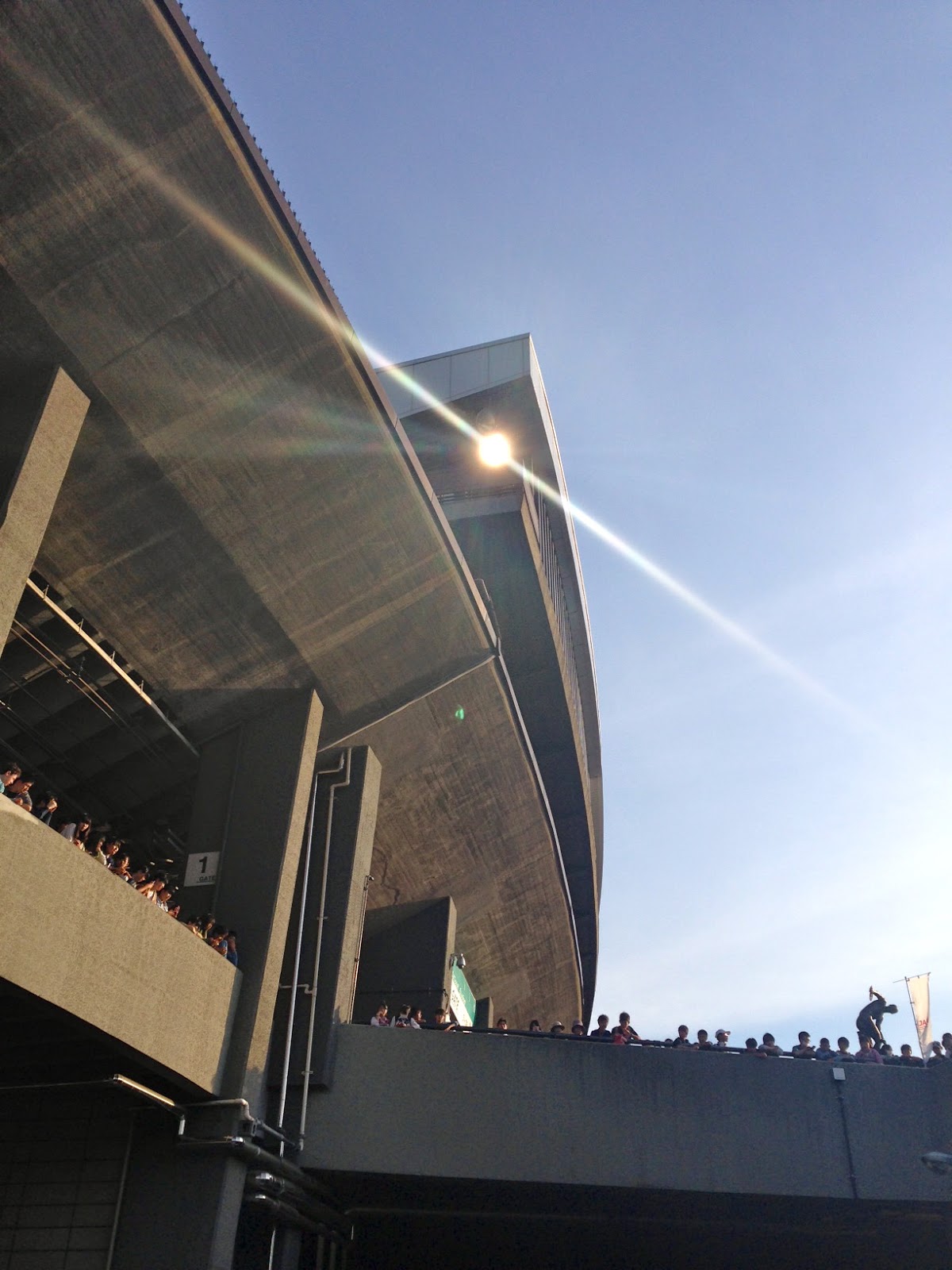 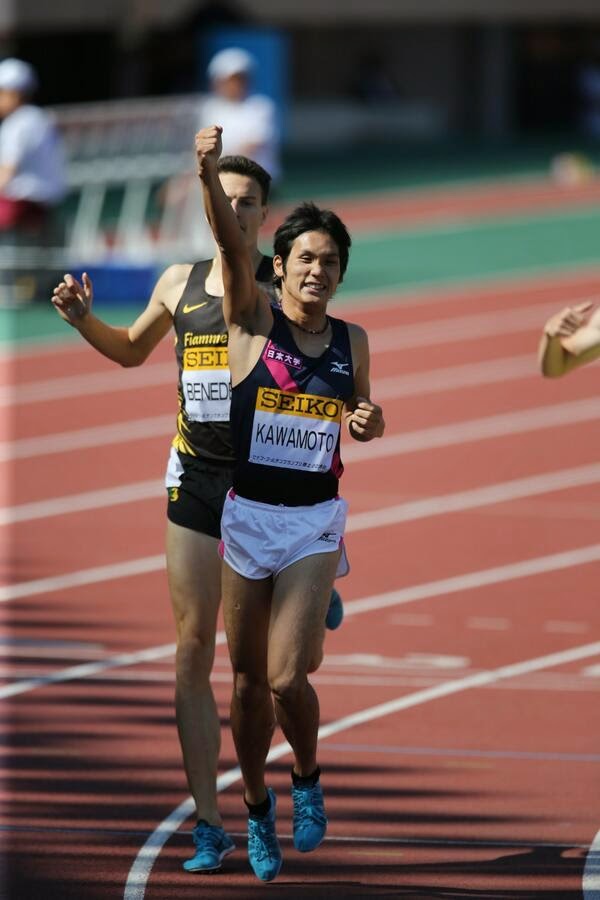 But the most unexpected highlight of the meet came in the men's 800 m.  Coming in with just the sixth-fastest PB in the field of eight, 2013 Japanese national champion and junior national record holder Sho Kawamoto (Nihon Univ.) started in last as teammate and 2013 junior national champion Takaaki Hosaka (Nihon Univ.) went up front for rabbiting duties.  Moving up to mid-pack on the second corner, Kawamoto stayed in position following Hosaka's departure just past 500 m before gunning it on the last curve and pulling past Giordani Benedetti (Italy), Erik Sowinski (U.S.A.) and Edwin Kiplagat Melly (Kenya) into the lead on the home straight.

Kawamoto's win was a big enough surprise but there was shock all around when the board read 1:45.75 for his time, a new national record by 0.41 and more than a second under his PB.  Yes, Japanese middle distance is still weak, especially among men, and 1:45.75 is still shy of even the B-standard for this fall's Asian Games, but a national record is a national record and doing it in style in the final meet on hallowed ground guarantees Kawamoto a place among the greats in the National Stadium's history books.

800 spectators were lucky enough to get to touch that history as part of the Golden Grand Prix Tokyo's closing ceremonies, given 30 minutes to run on its track one last time.  After speeches from Ethiopian dignitaries commemorating Abebe Bikila's Olympic marathon defense fifty years ago at the National Stadium, the Memorial Run participants circled the track under the light of the burning Olympic flame as the sun set, the digital clocks reading "Sayonara Kokuritsu," "Goodbye National." 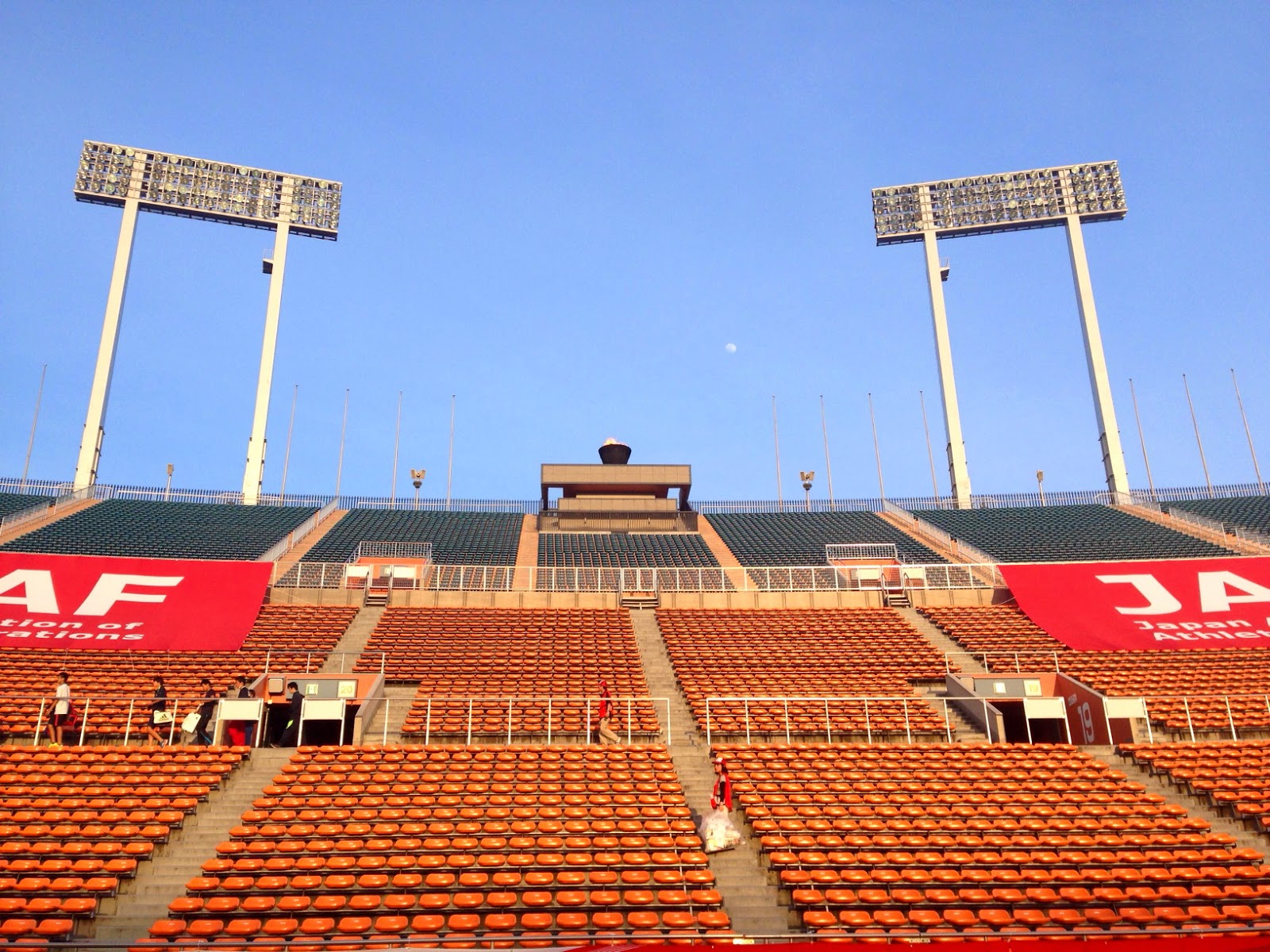 Some ran to be a part of the track's history, some to recall the great races they witnessed there, some to relive their own races.  One man changed into spikes and blasted a fast 200 m, another ran a slow lap wearing an antique white singlet and shorts with his front and back bib numbers from the 1995 Tokyo International Men's Marathon pinned on just as they were nearly twenty years ago.

As we ran JRN associate editor Mika Tokairin talked about her five times running the Tokyo International Women's Marathon, and I couldn't help recalling my one race there, the 2007 Shinjuku City Half Marathon when I set my lifetime PB starting and finishing on the National Stadium track, starting next to Toshihiko Seko and being the only person on the track and screen for my final lap. At the end of the 30 minutes there were as many tears as smiles as the Olympic flame was extinguished for the last time.  There is plenty of excitement for the 2020 stadium to come and all that it will bring with it, but the Kokuritsu Kyogijo will be dearly missed in the collective memories and hearts of Tokyo's running community.  Feel free to share your favorites in the comments section.


Along with my half marathon PB, some of my favorite memories of the National Stadium in no particular order: 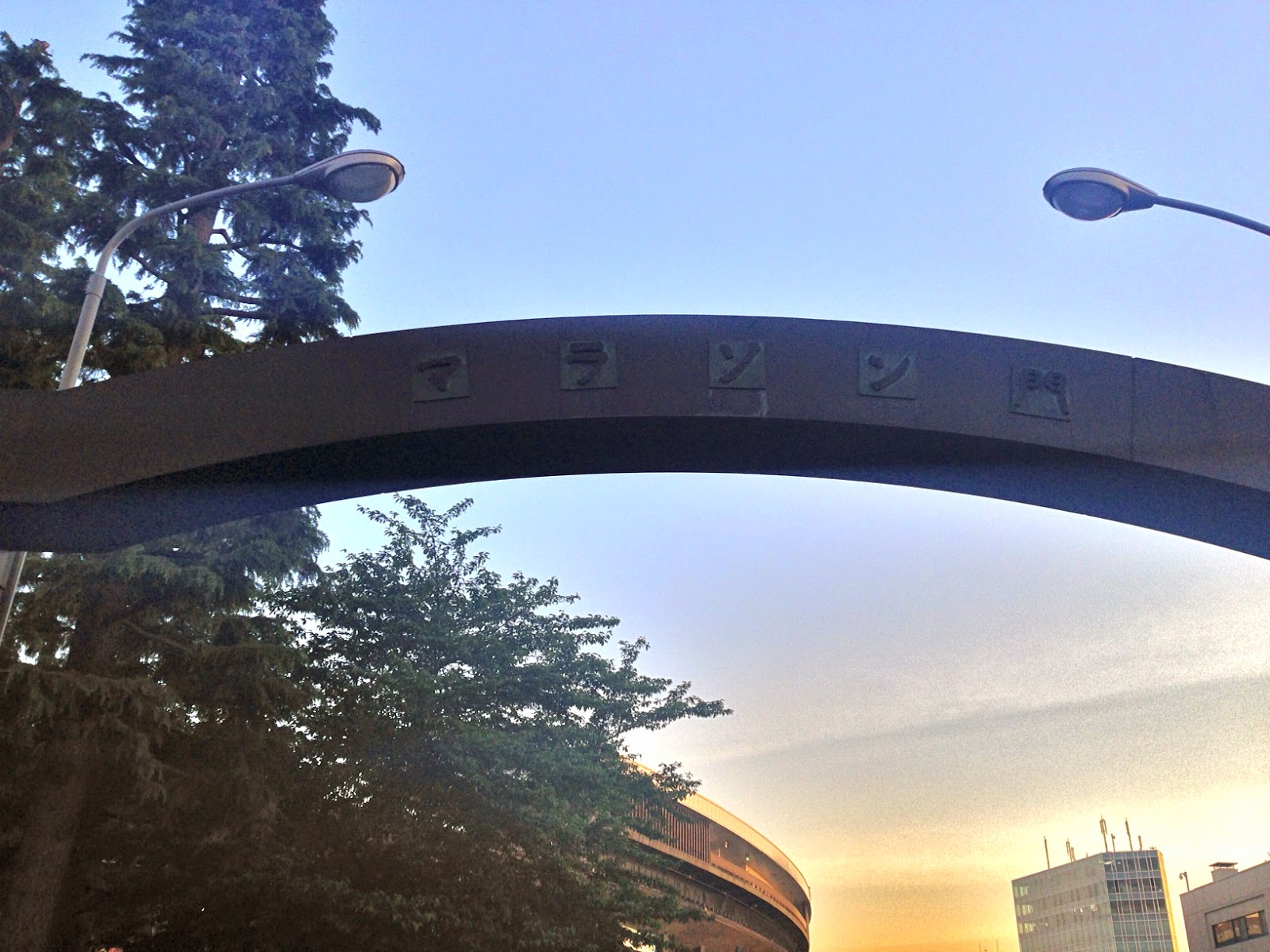 And, of course, this immortal piece of greatness: 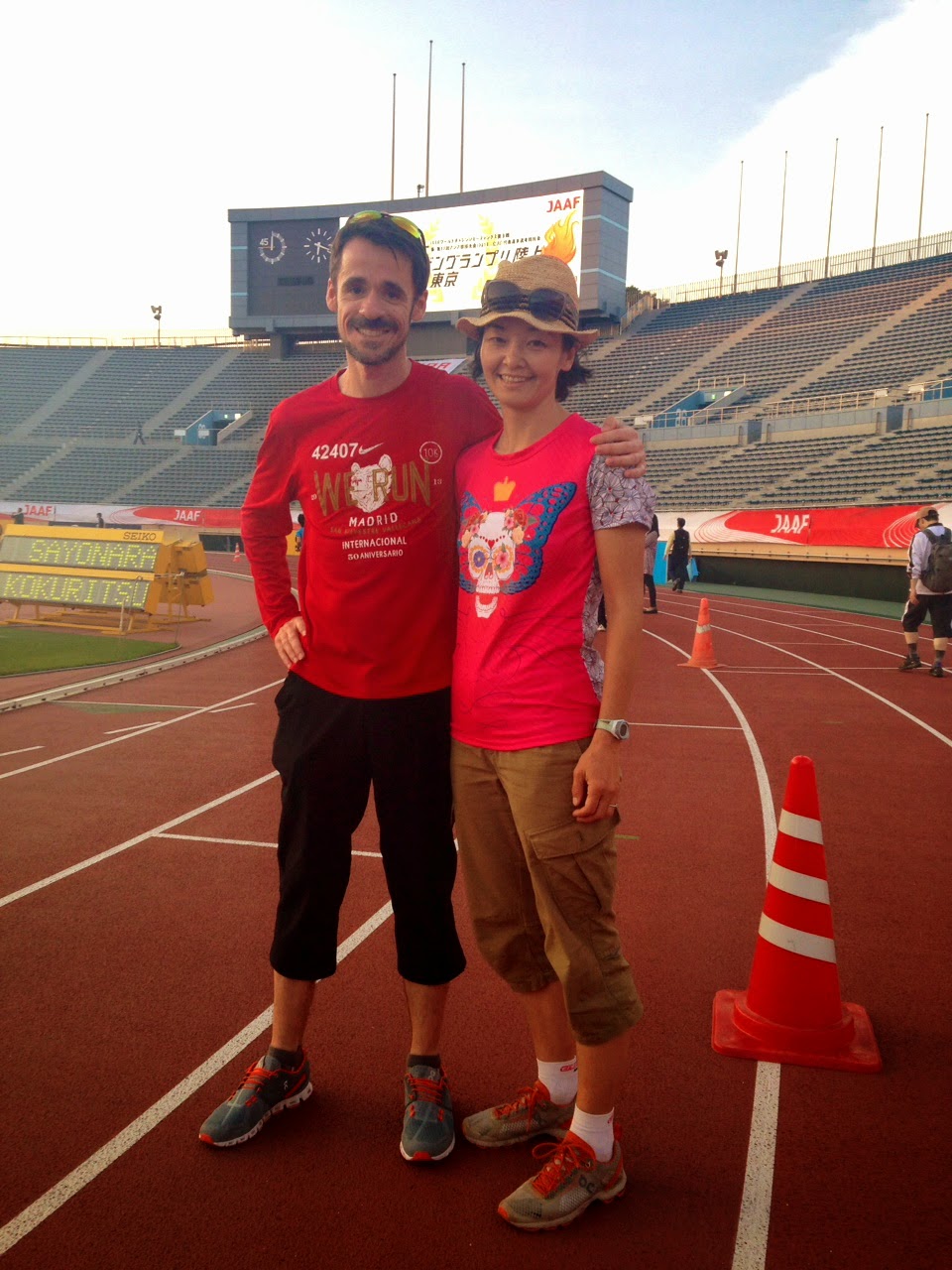 CK said…
Here's an obscure best spectating memory, also from WC1991. In the 2nd heat of the men's 10000m Katsumi Ikeda (Recruit team member) kept getting slightly dropped by the lead group of 9 or 10, but kept clawing his way back with the vocal home support. Get dropped and he'd miss the final - hang in with them and he'd get through, or maybe he had to outkick just 1 of them...can't remember exactly. And then on the final back straight Ikeda seemed to draw energy from the crowd, started passing people and qualified "comfortably" (well, except for collapsing and geting carried off!). Somehow I'd found myself watching with teammates of Koichi Morishta (Team Honda was it? who had run in 1) and it was an inspiring and emotional hour or so. In fact Ikeda never got going at all in the final - presumably both physically and mentally spent - but for me he was the biggest hero of 1991.
On the flip side, WC1991 possibly also included my most galling athletics-viewing (..."not-viewing" to be precise) experience ever. For the now legendary men's LJ my seat was right over the pit, but I'd sidled around to the bend where I was in an empty front row seat on the bend bend to focus on the women's 10000m. Great view of Liz McColgan and this unknown Deratu Tulu, but every now and again those cheers would erupt from over the back sraight...
May 15, 2014 at 2:00 AM