Catching Up With Arata Fujiwara 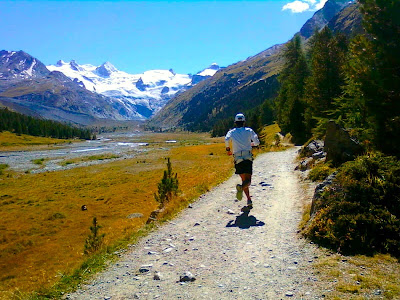 2:07:48 marathoner and London Olympian Arata Fujiwara (Miki House) is one of seven Japanese athletes running next week’s Great North Run half marathon in the U.K. with support from JRN. Out of competition with injury since a memorable run at last December’s Fukuoka International Marathon, the Great North Run will be Fujiwara’s first race of 2013. On Sept. 3 JRN met up with Fujiwara at his training base in St. Moritz, Switzerland. While doing a 33 km trail run together starting at 1772 m and peaking at 2755 m, we chatted about his current condition and plans for the upcoming season.

Are you an E.L.O. fan?  That's what I was listening to the whole way up here. "Mr. Blue Sky" came on just before the train pulled into St. Moritz station, appropriately enough.
No, I don't really know them.  I've been listening to a lot of early Pink Floyd lately.

How long have you been up here?
About a month. I needed to get away and focus for a while.

How are you feeling?
Great. When I got here I was about 8 kg overweight and was so out of shape I could barely run, but everything is back to normal and I don’t have any trouble with the injury.

After New York in 2010 you had a long-lasting injury that kept you out for about a year. Was this a repeat of the same injury?
No, this was a different one in my left hamstrings and hip. This kind of injury takes a long time and some people can take years to get over it. I’m back to normal, though.

Have you been training alone?
No, I’ve been doing track workouts with Viktor Rothlin and some longer hard runs with a couple of Switzerland-based Ethiopians, Tolossa Chengere and Nesero Kadi. Tolossa's married to a Swiss woman and is here most of the time. Viktor’s gone now, though, so I’m more on my own, sometimes with the Ethiopians.

Have there been any other Japanese runners around?
Just Eri Hayakawa (Team Toto). I’ve seen a couple of big Americans around too. They look pretty strong and have really good form.

What kind of workouts have you been doing?
A lot of track intervals and long trail runs like this. When I first got here I walked this course in about ten hours, then came out the next day and ran it in four. Last week I did 12 x 1000 m in 2:50 with Viktor. He couldn’t finish them but I got through no problem. Yesterday I did a 20 km buildup with Tolossa and Kadi, starting at 3:30/km and working down to 3:10. That was the first time in a long time that I’ve really felt like my running was on-target inside. I’m going to take tomorrow off and then the day after that it’s a 15 km buildup with Tolossa and Kadi going from 3:20/km to 3:05. I think the Great North Run is going to go pretty well.

What are you hoping to run?
I think I’m in shape to run about 1:02:30. With Yuki Kawauchi (Saitama Pref. Gov't) and Tomohiro Tanigawa  (Team Konica Minolta) there I’ll see how it goes. If Tanigawa goes for sub-62 I’ll probably follow along with him. Mostly I’m just really happy and excited to be getting back out racing again. It’s been nine months! That’s long enough to make me feel a little nervous about being back on the start line.

How many times have you run that kind of time in your career? Four?
I think I’ve run 62 three times, plus the 61 at Marugame. But in marathon training I regularly run 20 km pace runs in 59 minutes, so in reality I’ve done it many more times than that.

Who have you got for the Big Three at the Great North Run?
It’s really an incredible matchup, Farah, Bekele and Gebrselassie. I don’t know what Bekele can do over that kind of distance, but I’d have to go with Farah. Man, that’s really a race I’d like to watch on T.V.!

It seems like the best place to watch would be from right behind them.
(laughs) Yeah, well, I’ll see what I can do. How many times has Farah run half marathons?

I think this is his third time. He ran low-60 in New York in his first one with Galen Rupp right behind him.
Rupp. How come U.S. distance running has gotten so strong all of a sudden?

What’s next after the Great North Run?
Fukuoka. I’m going to run 2:07 there. A year late, but better late than never. I was going to race overseas this fall but the level among Japanese men has come way up lately so I need to get back in there and show them what’s what. And Kawauchi says he’s running Fukuoka too to try to get onto the Asian Games team, so I have to go mix things up for him. (laughs) One of my targets for the winter and spring is to break Toshinari Takaoka’s record of six career sub-2:10’s. I only need two more. At this stage I know that I could run sub-2:10 pretty much any time I wanted. I could do it right now, or sometime in the fall, but I’m just going to focus on running a good one in Fukuoka.

Kawauchi wants Jaouad Gharib’s record of fourteen career sub-2:10’s.
I could do that too, no problem. However many Kawauchi ends up running, I’ll do two more. (laughs) 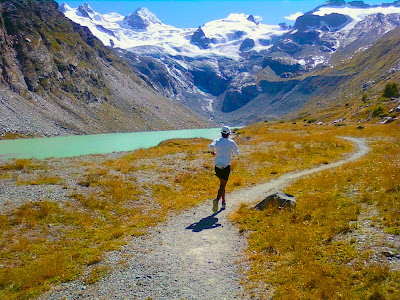 Samurai Running said…
Fantastic interview! Good to know what's been happening with him. Looking forward to the next few races too.
September 7, 2013 at 4:24 PM