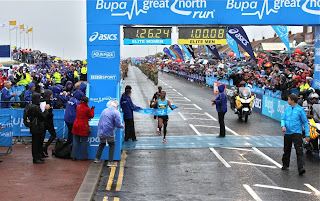 The 2013 Great North Run lived up to expectations with thrilling races up front on both the men's and women's sides.  Battling strong crosswinds through the first half of the race and benefitting from an equally strong tailwind through the middle stages, 5000 m and 10000 m world record holder Kenenisa Bekele (Ethiopia) made a successful transition to longer distances with a 1:00:09 win by one second over favorite Mo Farah (Great Britain) and the great Haile Gebrselassie (Ethiopia) who took nearly two minutes off the existing 40+ world record in 1:00:41, while London Marathon winner Priscah Jeptoo (Kenya) mopped the soaking wet roads with Moscow World Championships 5000 m and 10000 m gold medalists Meseret Defar (Ethiopia) and Tirunesh Dibaba (Ethiopia) to win in a smoking 1:05:45.  The JRN-supported Japanese contingent brought its A-game, six of the seven of them making the top eight led by Arata Fujiwara (Miki House) who scored the best-ever Japanese men's finish at the Great North Run at 4th in 1:02:44 in his first race of 2013, and relative unknown Misaki Kato (Team Kyudenko) who debuted in 1:10:44 in her first race outside Japan. 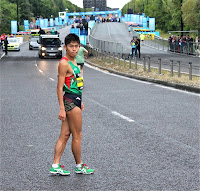 In the men's race Bekele went straight to the front, throwing down a surge on a downhill into a tunnel at 2 km that shook things down to a pack of around ten. In short order it was down to the big three and 1:01:06 Italian Daniele Meucci, with a gap back to 2013 Marugame Half winner Collis Birmingham (Australia), another gap to Fujiwara, another to Tomohiro Tanigawa of 2013 national champions Team Konica Minolta, and yet another to a pack led by the Koichi Morishita-coached Ryuji Watanabe (Toyota Kyushu) and independent Yuki Kawauchi (Saitama Pref. Gov't) in his U.K. debut.  As Meucci lost touch with the leaders Fujiwara overtook Birmingham, and as the pair closed on the Italian first Tanigawa and then a surging Watanabe caught up to make a chase pack of five.  Meucci soon faded, and another surge from Watanabe at 10 km broke Birmingham to cut the chase pack down to the three Japanese men. 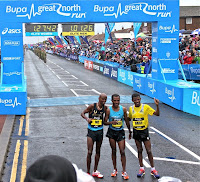 Up front Bekele ran into trouble mid-race when a jogger bandit cut in and tried to run with him, Bekele slipping 30~40 m behind Farah and Gebrselassie for several kilometers before abruptly returning.  Running as a trio until the steep downhill to seaside just before the 12 mile mark, Bekele and Gebrselassie jointly attacked on the descent to try to crack Farah. Although a gap momentarily appeared Farah was soon back, and as Bekele went into long-surge mode Gebrselassie proved unable to match the two younger runners' closing speed.  Bekele likewise opened up on Farah, but in the last 200 m Farah returned for what looked like might become a replay of last year's last-second from-behind win by Wilson Kipsang (Kenya) over Micah Kogo (Kenya).  He closed to within one second, but it was Bekele who crossed the line first to the satisfaction of taking down the man who has replaced him as the dominant track runner of our time. 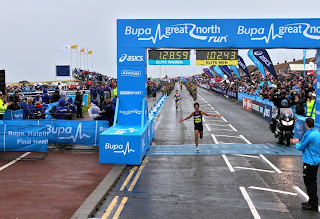 Further back, Watanabe, Fujiwara and Tanigawa ran as a trio until 15 km when Tanigawa, a younger graduate of Takushoku University, the alma mater of both Fujiwara and Moscow World Championships 5th-placer Kentaro Nakamoto (Team Yasukawa Denki), made a move that shook off Watanabe. Fujiwara and Tanigawa ran side-by-side until 20 km when Fujiwara threw in a decisive move that gave him an unbreakable lead.  Tanigawa crossed the line four seconds behind, 5th in 1:02:48.  Close behind, Watanabe cleared 64 minutes for the first time with a time of 1:02:58 for 6th. Kawauchi, hoping to break 64 as he rebuilds from the Moscow World Championships marathon, duelled with Ireland's Mark Kenneally before losing out in the last stretch to take 8th in 1:04:08.  Making an international debut, 1:03:15 man Ryota Matoba (Team Komori Corp.) was the only Japanese runner to falter, 19th in 1:06:12. 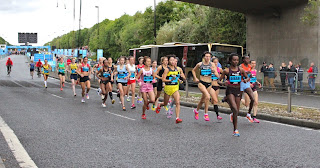 In the women's race, Jeptoo, who came in with a best of 1:06:11 that was over a minute faster than Defar and Dibaba's best times, made payback for being given short shrift in a race billed by organizers as a duel between the two Ethiopians.  After a relatively fast-paced first five miles Dibaba pushed ahead with a 4:59 fifth mile that assured it was to be a race of three.  Jeptoo then surged, delivering a 15:03 five km split from 10 to 15 km and an incredible 4:34 tenth mile to make the race all hers.  Granted, that mile benefitted from some downhill and tailwind, but it was nevertheless on a par with the pace of the top men over the same stretch.  Following up the 15:03 with a 15:04 split from 15 km to 20 km she soloed her way on to cross the line in 1:05:45, 24 seconds ahead of Defar and more than a minute better than Dibaba.  Although the rolling Great North Run course is admittedly a downhill point-to-point course, all three of the top women cleared their PB marks by wide margins, an indication of the high quality of the race.  France's Christelle Daunay was the only other athlete to go under 70 minutes, 4th in 1:09:49.

Kato, in not only her first race but also first time outside Japan, came to the Great North Run off a 33:10.83 PB win at May's Kyushu Corporate Track and Field Championshps 10000 m.  Running mostly alone, she made a strong debut in 6th with a 1:10:44, just outside the Japanese top ten for 2013.  Ayaka Hitomi (Team Shimamura), also making an international debut, spent much of the race battling Croatian national record holder Lisa Stublic and 2009 Great North Run winner Jessica Augusto (Portugal).  Fading slightly over the final kilometers, she succeeded in holding on for a PB of over one minute as she took 8th ahead of Augusto in 1:13:09.

Quotes from the Japanese athletes at this year's Great North Run:

Arata Fujiwara (4th, 1:02:44): "This was my first time losing to Haile in four races against each other, so I'm a little disappointed. (laughs) But in terms of a comeback race, I'm very satisfied with this.  I was aiming to run 1:02 and that's what I did.  Looking back now it has been a long time away."

Tomohiro Tanigawa (5th, 1:02:48): "This was only my second race outside Japan. Boston in April was the first time and that was mostly just a test run to see how I could handle the jet lag and unfamiliar conditions.  This was my first time really racing overseas. I wasn't strong enough to beat Fujiwara at the end, but overall it was a big step forward."

Yuki Kawauchi (8th, 1:04:08): "I've taken it too easy since the World Championships and have put on some weight.  This just goes to show that you can't be lazy.  I thought I could run 63 this time, but this reflects my current condition pretty reasonably.  I'm kicking myself for losing out in the last sprint, though."

Ryota Matoba (19th, 1:06:12): "I didn't really have any specific problems, I just couldn't get into my stride.  I was alone pretty quickly and thought I could even out and catch people but it didn't work out."

Misaki Kato (6th, 1:10:44 - debut): "The start was really fast.  I kept trying to catch the tall white woman ahead of me [Jelena Procopcuka] but couldn't get her.  It was awesome to get run in a race like this for my first half marathon.  I'll be 29 for the Tokyo Olympics.  I can't imagine trying to run the same pace for twice as far, but this is the first time I feel like I can really think about the marathon there as a goal." 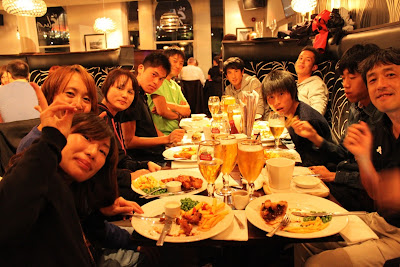 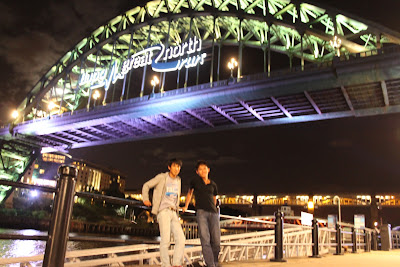 TokyoRacer said…
I saw the video of the last few minutes, Bekele vs. Farah - awesome!
With the Japanese doing so well, it must have been a fun trip. Congratulations on shepherding that crowd of runners to good results.
September 16, 2013 at 11:44 AM

yuza said…
The course is always deceptively fast, but still some good performances.