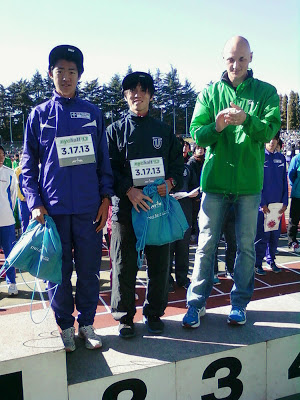 2012 National University Ekiden Champion Komazawa University's ace sophomore Kenta Murayama, the first man since the great Toshihiko Seko to win the National University Championships 5000 m title as a first-year, added another laurel to his collection with a PB 1:02:46 win at the world's deepest half marathon, the 25th anniversary Ageo City Half Marathon. On a severely windy and cloudless day Murayama and runner-up Kento Otsu of 2012 Hakone Ekiden course record-setters Toyo University were the only men to break 63 minutes.  In his final tuneup for the Dec. 2 Fukuoka International Marathon fan favorite Yuki Kawauchi (Saitama Pref.) tied his best-ever placing in Ageo as he took 3rd in 1:03:02, his best time on the Ageo course and one of the best of his career.

In a new relationship inaugurated in honor of Ageo's 25th anniversary and facilitated by JRN, both Murayama and Otsu along with their coaches Hiroaki Oyagi and Toshiyuki Sakai received invitations to the 2013 New York City Half Marathon from NYRR elite athlete manager Sam Grotewold in recognition of their top two finishes.

Otsu, who ran the 2012 New York City Half on an informal invite after his 3rd-place finish at last year's Ageo, was determined to go back and did the lion's share of the work throughout the race.  Taking the pack through an 8:45 opening 3 km straight into the wind, he remained in the lead through 15 km with help from teammates Hiroaki Koike and Takeru Sakuma.  A lead pack of twenty separated by 5 km, steadily dwindling to eight by the 15 km point, with Murayama staying on Otsu's shoulder looking smooth and controlled and clearly holding back to bide his time before a surge for the win.

Otsu made a pre-emptive move at 15 km, breaking up the lead pack but taking Murayama with him.  He surged again on a corner at 18 km but was still unable to shake Murayama off.  A km later Murayama had had enough and was gone.  Otsu did his best to follow, dropping Kawauchi, Waseda University senior Yuki Maeda and pro Minoru Ikebe (Team Honda), but could not match Murayama's closing speed.  Kawauchi, who has struggled in recent training for Fukuoka, in turn could not follow the college pair and barely held off Ikebe, who closed hard to run down Maeda for a 1:03:04 PB for 4th.

In post-race comments Murayama said, "The wind was really strong today, but even though we were running into a headwind a lot of the time I was able to deal with it and I think I ran pretty well.  It would have been nice to lead the whole way, but I think I ran up to my current level and that that was pretty good.  I ran 62 today but was shooting for 61, so on that point it was disappointing.  I think I would have run a better time if I'd gone with 5 km to go, so I want to improve on that in my future races.  Komazawa head coach Oyagi commented, "We haven't been doing many road races lately so I wanted to see whether they would run seriously or not, to see how well Murayama could do in this race.  Even though it was windy I told him to go when it was time for him to go.  I think he needs to focus on pushing harder over the last 2 km."

Along with Murayama, Komazawa 10000 m record holder Ikuto Yufu ran a PB 1:03:24 for 8th, improving Komazawa's chances of adding the crown jewel of a Hakone Ekiden title to its Nationals win.  At the same time, Nationals runner-up Toyo took three of the top ten spots, second stringers Tsukasa Tomioka and Genta Yodokawa running sub-64 PBs to further strengthen Toyo's Hakone title defense arsenal.  With Komazawa far stronger on paper and defending Hakone champ Toyo 2nd at both the Izumo Ekiden and the National University Ekiden Championships this season, Jan. 2 and 3 are going to be big.  After that, it's a New York rematch for Murayama and Otsu.

10th place was the 3rd-fastest in Ageo history behind only the race's record-setting 2005 and 2006 editions, but although university entrants were at an all-time high 800, due in part to the windy, sunny conditions only 290 runners broke 70 minutes.

Few elite women run Ageo, but as per its usual practice Juntendo University put two of its team in the race.  Saki Yajima proved the stronger of the two, taking the win by eight seconds in 1:15:47 over Mai Nakamura.  High schooler Nao Taguchi was 3rd in 1:19:47 ahead of her sister Risa Taguchi (both Sayama Keizai H.S.).

Anonymous said…
Did Kawauchi get an invitation to the NY city half too?

Brett Larner said…
Thanks. No, the invite is only for the top two Japanese collegiates and their coach or coaches. I feel a little bad for Waseda's Yuki Maeda as he was the 3rd Japanese collegiate behind Otsu last year too. He ran faster this year despite the wind but still couldn't get into the top two.
November 19, 2012 at 3:40 PM