Fukushi Shooting for the Marathon in London 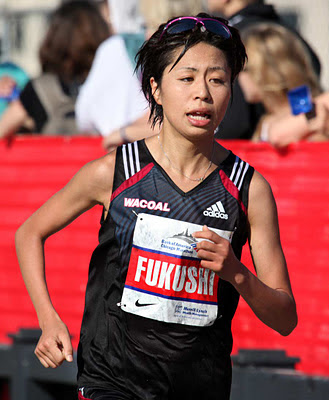 The pre-race athletes' press conference for the Jan. 29 Osaka International Women's Marathon Olympic selection race took place Jan. 27.  Aiming for her long-hoped-for appearance on the Olympic marathon stage, half-marathon national record holder Kayoko Fukushi (29, Team Wacoal) appeared confident of her chances of punching her ticket.  Four years ago in Osaka Fukushi went out at a blazing speed in her debut only to slow dramatically after 30 km.  Fully prepared this time, Japan's queen of the track is ready for payback.

Fukushi looks confident because she feels it.  At the press conference her face was relaxed.  "My goal is to beat myself," she said.  "What's different this time?  Maybe I've grown up a little, as people do."  It's been four years since her "Breakdown of the Century" at the Beijing Olympics selection race, and Fukushi is focused on erasing that memory.  It has been a month since she announced following December's National Corporate Women's Ekiden Championships that she would run Osaka, and in that time she has completely shut out the media to concentrate on her training.  For her debut four years ago Fukushi was underprepared, with only one month of dedicated training. This time she has been training specifically for Osaka since July, an entire half-year.  "We didn't just cram for this overnight," said her coach, Tadayuki Nagayama.  "I think the gods of the marathon smiled upon us this time."  His assurance that Fukushi will earn her place in London was easy to see.

Asked about the withdrawal of her strongest rival for the team, Athens Olympics marathon gold medalist and national record holder Mizuki Noguchi (Team Wacoal), Fukushi said , "I was really surprised.  But it doesn't change anything for me."  She added firmly, "I want to go to London in the marathon.  I want to see how competitive I can be against the world's best marathoners.  I'm looking forward to taking on all challengers."  Totally focused on London, Osaka is Fukushi's next checkpoint.