Every year I come on and talk about how great the Hakone Ekiden, Japan's oldest and most important road race relay, is.  Apart from the Olympic medalists I didn't know much about Japanese distance running when I first came here, but Hakone was a big part of what turned me on to it.  The scale of it, twenty university teams running 217.9 km split into ten stages over two days, the production values of Nihon TV's broadcast that pulls in 30% nationwide viewership ratings for the entire Jan. 2-3 event, the huge crowds along the course, the quality of the athletes, and the sheer drama of the racing.  If you haven't been here to see it then honestly you don't know what you are missing.  There are lessons here for the World Marathon Majors and others seeking more mass popularity for the sport.  Keyhole TV is better than nothing and for the last two years I've done what I could to cover it live via Twitter, but you really have to be here to get a sense of how big Hakone is.  I wish you could, especially for this year's 88th running.

It doesn't seem like it's been three years since I was writing about a Toyo University first-year from Fukushima who said he was going to go out and break Masato Imai's revered record on the 865 m-climb 23.4 km Fifth Stage.  Ryuji Kashiwabara did it, and ever since then no one has had a bigger impact on the outcome and public perception of Hakone.  Breaking Imai's record as a first-year, Kashiwabara was 2:38 faster than the next-best man, giving Toyo its first-ever Hakone win.  As a second-year he was 4:08 faster, almost singlehandedly giving Toyo the win.  Last year he had injury problems and was only 1:59 faster than the second-best on the stage, missing a third-straight record, but Toyo had ten men with 10000 m PBs under 29 minutes and fought a close race against old boys network giants Waseda University, who with ten men of their own under 29 minutes including first year and Asian junior area half-marathon record holder Suguru Osako, emerged on top.  Both Waseda and Toyo broke the Hakone course record, Waseda winning by just 22 seconds in 10:59:50.

This year Waseda is just as strong on paper, with ten sub-29 minute men on its roster, nine of them on its Hakone entry list.  The top twelve men on its sixteen-man Hakone roster average sub-14 for 5000 m, sub-29 for 10000 m and sub-64 for half-marathon.  Toyo appears weaker, with only five men sub-29, but with sophomores Yuta Shitara and Kento Otsu having run sub-63 at the Ageo City Half-Marathon last month the team's chances remain strong.  But they are not alone.  Last year's Waseda and Toyo squads were the two best university teams ever assembled, but somehow this year two other teams have come up to join them in quality.  Out of nowhere, last year's 3rd-place Komazawa University has come up with ten men with sub-14 PBs for 5000 m, seven of them with sub-29 marks for 10000 m, four of those sub-28:30, and two, Ikuto Yufu with a 28:02.46 and Hiromitsu Kakuage, with a 28:03.27, making the all-time Japanese collegiate top ten.  Meiji University has also produced eight men sub-14, led by newly-minted Japanese collegiate 10000 m record holder Tetsuya Yoroizaka, who set PBs of 13:29.11 and 27:44.30 over the summer.  Last year seemed like a pinnacle, but this year promises even more.  Here are the top twelve of the sixteen on each of these teams' entry lists, ordered by half-marathon PB. Click chart to enlarge. 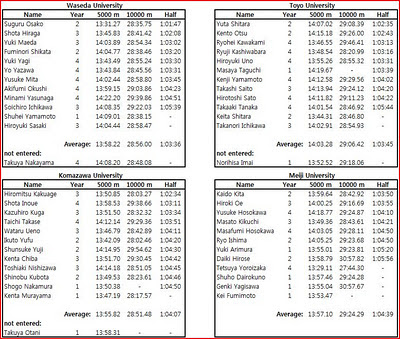 The race will be between these four schools.  Despite Meiji's speed over shorter distances, it lacks the half-marathon credentials of the other three, and with Hakone's stages averaging just over a half-marathon Meiji is unlikely to hang on up front.  Waseda is stronger across the board than Toyo but has been in ramshackle condition all season, 3rd behind Toyo and Komazawa at both the Izumo and National University ekidens, a full five minutes behind at the 106.8 km National University Ekiden with most of its best men injured.  Barring a miraculous recovery, Waseda is doomed and could fall to Meiji, Chuo University or the Kanto Regional University Select Team made up of ace runners from schools that did not qualify for Hakone.

That leaves Komazawa and Toyo.  Komazawa has far stronger credentials over 5000 m and 10000 m, its top twelve men averaging 13:55.82 and 28:51.48, but Toyo is significantly faster over the half-marathon, with an average of 1:03:45 to Komazawa's 1:04:07.  And it has Kashiwabara.  It's hard to overestimate how much of an advantage he is to Toyo, or how much his graduation will lower the team's standing next year.  His superb anchor run at Nationals last month suggests he's in shape for another stage record, and even if Komazawa produces its best-ever Fifth Stage run Kashiwabara will still pick up two minutes.  Considering that Komazawa's margin of victory over Toyo at Nationals was only 33 seconds over 106.8 km, roughly half the distance of Hakone, with an equivalent performance they will still lose to Toyo by a minute thanks to Kashiwabara's edge.  Likewise for Waseda which has a half-marathon average of 1:03:36, nine seconds better than Toyo's.  With ten men versus Kashiwabara's two-minute advantage, assuming both schools ran 100% Waseda would still lose to Toyo by thirty seconds.  Toyo also has superior depth to either Waseda or Komazawa, giving it room to work with its race-morning substitutions that its rivals lack.  Lots can go wrong, and it often does at Hakone, but Toyo looks ready to take down both Waseda and Komazawa.

Looking at the official entry lists, Waseda, Komazawa and Meiji have all stacked the first day with their best runners.  It's clear why: try to get far enough away to prevent Kashiwabara from putting Toyo into the lead at the end of Day One as he has for the last three years.  Waseda has three relatively weak men on Day Two and its only two quality alternates, captain Yuki Yagi and sophomore Fuminori Shikata, have both been out this season with injury.  Meiji has Yoroizaka on the alternate list but it will be a major shock if he does not go on the Second Stage.  With a weaker Day Two lineup it should disappear from the front but should have little trouble of finishing top five.  Komazawa and Toyo are both playing cagier, Komazawa holding three of its top men in reserve and Toyo four.  Expect Toyo's Yuta Shitara to play a major role wherever he is put.

Beyond the six teams already mentioned, the race to finish in the top ten and secure a seeded spot for the 2013 Hakone Ekiden looks to be very, very close, with ten schools in possible contention for the four spots remaining.  Takushoku University, led by Kenyan Duncan Muthee, and Tokai University featuring 28:00.78 man Akinobu Murasawa, are the favorites, while Josai University and Jobu University, coached by former Waseda teammates Seiji Kushibe and Katsuhiko Hanada, have the best chance of taking positions nine and ten.  One step down but still in reach if Takushoku, Tokai, Josai or Jobu falter are Tokyo Nogyo University, Aoyama Gakuin University, Kanagawa University, Yamanashi Gakuin University, Teikyo University and Kokushikan University.  Both up front and back in the mid-pack the 2012 Hakone Ekiden promises to be big.

Nihon TV's broadcast begins at 7:00 a.m. on both Jan. 2 and 3, with the race kicking off at 8:00 each day.  Overseas viewers should be able to watch online for free via Keyhole TV, but be prepared to refresh often on the later stages as more people tune in.  Once again, JRN will be offering live English commentary via Twitter @JRNLive.  If the feed maxes out, we will switch over to @JRNHeadlines for the rest of the day.   Click here for a guide to each team's uniform to help figure out who is who.  For an interactive course map, click here.

Onwards and upwards to the best race of the year anywhere in the world.