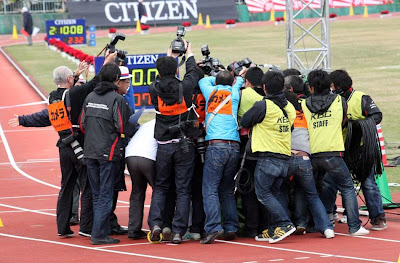 Out cold on the ground as the media pile on 11 seconds after the finish.

Star amateur runner Yuki Kawauchi (24, Saitama Pref.) made a strong argument for his status as a contender for the London Olympic team at the first of three domestic selection races, the Dec. 4 Fukuoka International Marathon.  After falling behind once at 20 km he came back to hammer Masato Imai (Team Toyota Kyushu) with astonishing relentlessness, a dead heat one-on-one race that saw Kawauchi emerge as the top Japanese finisher, 3rd overall in 2:09:57.  "It was really painful," he said of the battle with Imai, "but I love that kind of situation more than anything else.  Telling myself not to give up, hitting him with everything I have and coming out ahead gives me a lot of satisfaction."

Kawauchi's great run in Fukuoka leaves the Federation in a state of confusion about how to deal with him.  Executive member Tadasu Kawano did not hesitate to praise the ways in which Kawauchi met the Federation's expectations, saying, "He showed the best of what it means to be  Japanese, and when the chance was there he went and took it himself."  At the same time he added, "I honestly don't know whether that was strong or weak.  In terms of the Olympics, we have to be strict about the objective numbers."  For his part Kawauchi has no illusions about his performance.  "I don't think they'll pick me based on today.  I just wanted to run this one for experience, and then to go for a fast time in Tokyo," he said.  "I didn't expect to actually be in the race for an Olympic spot in Fukuoka, and to be honest it's pretty sad that this kind of time was good enough to be the top Japanese man." Unable to stand, Kawauchi sits and talks to the media post-race.

Even in spite of coming out on top of the first selection race, Kawauchi remains steadfast in his resolve to run the second selection race as well, February's Tokyo Marathon.  Running in another selection race would shatter the neat, common sense logic of the Federation's selection system, but Kawauchi is determined to do it to show he is worthy of wearing the Rising Sun, another source of consternation for the Federation.  It is unprecedented for the top Japanese finisher in a selection race to choose to run in another one.  If he runs badly, his position among the Olympic contenders will fall drastically.  "The way we know how to do things doesn't apply here anymore," admitted Kawano.  "He's got his way of doing things and we want to respect that, but we have to see if there isn't someplace that we can compromise.  I have to have a one-on-one meeting with him to make sure he understands the selection procedure."  The Federation also plans to meet in the near future to decide how to adjust to the situation.  In the meantime, Kawauchi confirmed that he will go ahead with plans to run the Dec. 18 Hofu Yomiuri Marathon.

"We wanted 2:08," Kawano said of the Federation's goal for Fukuoka.  Not only did the best of the corporate system fall far short of this goal, but they also lost out to an amateur doing a training run.  Federation director of men's marathoning Yasushi Sakaguchi urged the country's corporate runners to take the result as a wake-up call, saying, "Despite having an outstanding training environment they lost to Kawauchi.  Our athletes and their coaches had better take stock of how they feel after something like this."  For Kawauchi, the question of what to feel is simple.  "When I was getting close to the two lead Japanese men [Imai and Kazuhiro Maeda] I could see that they were running along peacefully," he said, "Then the image of the Rising Sun suddenly floated to the surface of my mind.  As I ran I remembered being in the award ceremony for the team medal at the World Championships and I had the urge to experience the feeling of being on the medal stand one more time."

Kawauchi, wearing his Kanto Regional University Select Team jacket from the 2009 Hakone Ekiden, in Fukuoka, Dec. 5. Click photo to enlarge.  Photo caption: What would Kawauchi like for Christmas? "A faster time."

Update:  Kawauchi appeared at a press conference in Fukuoka the morning of Dec. 5.  "I might not be chosen for the Olympic team with this time [2:09:57]," he told reporters.  "In Tokyo I want to run a time one class higher and be picked on that basis."  His comments confirmed that he intends to run the Feb. 26 Tokyo Marathon Olympic selection race.

Kawauchi said that last night after the race his muscles hurt so much that he couldn't sleep, so to help his body recover he went for an early-morning 70 minute jog through the city, washing away the fatigue.  Following the race he had a meeting with Kawano.  "He told me that I should keep doing things the way I have been [racing to build fitness].  That's a relief," he laughed.  He plans to race three or four times before Tokyo.

yuza said…
Is there a rule that states that an athlete cannot enter two of the Olympic qualifier marathons? If not, then it seems quite sensible to enter two, especially if an athlete does not run well in their first qualifier.

I know Kawauchi is an extraordinary exception, but he does make some of these corporate runners look soft. I like the corporate running system here, but maybe some of the runners are just a little bit too comfortable....Probably not, I daresay it is the pressure to keep a place in the team which retards some runners. I really do not know, any ideas Brett?

Either way I can not imagine Kawauchi is that popular with corporate runners at the moment.
December 7, 2011 at 7:07 PM

Bob Hodge said…
I love Kawauchi san. We need more Kawauchi san.
I am curious to know why he continues to be called an "amateur"
Does he not accept financial assistance from JAAF or prize money or endorsement from athletic shoe company?
December 8, 2011 at 1:27 AM

Niall 'Can't Run...' McGrath said…
Hi Bob,
I agree with you that we need more Kawauchi san!!! The guy is a great runner with a great attitude.

I believe that Yuki is considered an amateur runner due to the fact that he has a regular 9-5 type job and doesn't run for a living like most other elite level runners. I'm sure he takes home his winnings but that is not how he pays his bills.
December 8, 2011 at 9:14 AM

No rule, it's just not done. The only time people run a second selection race is when they bomb an earlier one, like Imai running Biwako last spring to try to make the Worlds team after underperforming in Fukuoka last year. They're at a loss because what Kawauchi is doing just doesn't fit the way the system is supposed to work and I don't think they can understand why he is perfectly willing to gamble his position this way. I agree that he is probably making his share of enemies because he is embarrassing everybody, coaches, federation and corporate-league people as well as the corporate runners.

Thanks for commenting. A long answer:

I think a lot of the conception of Kawauchi as an amateur comes in contrast to the existence of a corporate-sponsored league in Japan. There is a very clear distinction between the corporate team runners, privately-sponsored 'pro' runners like what Arimori, Fujiwara and Takahashi tried to do, and 'shimin,' translated directly as 'citizen' but in the context of Japan's running world used to denote 'amateur,' people who are not sponsored and are not part of the corporate system, regardless of their ability level.

Kawauchi is still called an amateur because despite his dramatic improvement he still fits into the shimin category better than he does either the corporate or pro categories as they are defined here. As far as I'm aware he is not motivated by money whatsoever and receives no money or shoes from sponsors. When I interviewed him in the summer he said he was still buying all his own shoes. I did notice that during his warmup at Worlds he was wearing the new Sony Walkman that had not been publicly released yet at that point so he may be receiving some things off the record, but at the same time in the picture at the end of the article above, taken the day after Fukuoka, he is wearing his old jacket from the 2009 Hakone Ekiden. He has also turned down offers from corporate teams on more than one occasion.

Yes, since his 2:08 the federation has sent some money his way to support his training and he has won prize money a few times, but if you look at his race calendar this year since the 2:08 it was almost entirely made up of shimin races like the Okunoshima 50k and the Shitsugen 30k where he was racing for a trophy and things like a watermelon or a box of sweet potatoes when he could easily have been running money races elsewhere.

Of course he's too good now to really be considered a pure amateur, but everything I've seen says he is trying to remain as close as he can to being a normal hobby runner who holds down a job and runs in his free time because he enjoys it.
December 8, 2011 at 3:22 PM

Brett Larner said…
I forgot to mention that the corporate team league officially considers its runners to be amateur clubs made up of normal company workers, not professional athletes, which is as absurd as it is dishonest. Africans who are hired to run also generally come on 'amateur athlete' visas.
December 8, 2011 at 3:27 PM

Bob Hodge said…
Good insight Brett. Seems like the media love playing into the idea that Kawauchi is an amateur.