May 05, 2010
interviewed and edited by Brett Larner
photo courtesy of Stephen Mayaka 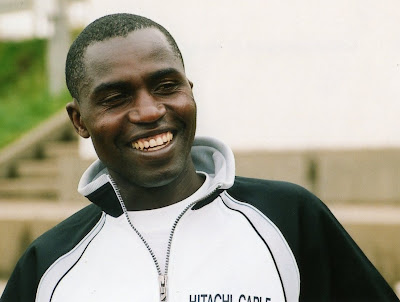 Stephen Mayaka was the first Kenyan high school runner in Japan and the first to go the complete route from high school to university and on into the corporate running world. Now a Japanese citizen, married to a former World Championships-level Japanese marathoner and head coach of Sozo Gakuen University’s track and field team, Mayaka is a mentor to Kenyan athletes both across Japan and back in Kenya. He was the man who guided Samuel Wanjiru through his time in Japan and who currently manages Kenyan XC champion Paul Tanui (Team Kyudenko), World Championships 10000 m bronze medalist Martin Mathathi (Suzuki Hamamatsu AC) and other notables including Gideon Ngatuny (Team Nissin Shokuhin) and Philes Ongori (Team Hokuren).

JRN interviewed Mayaka just before New Year, 2010 for an article in this month's issue of Running Times magazine. In the wide-ranging, in-depth three hour interview Mayaka talked about everything from his life and experiences to those of the runners he now cares for to discrimination to predictions for the future of both Kenyan and Japanese distance running. This month we present the complete interview as a series of articles on our subscription site JRNPremium. It's the definitive interview with one of the key figures in the modern Japanese distance running world. Below are some highlights from the first part of the interview. Click here to subscribe and read the full interview along with previous issues featuring Kiyoko Shimahara (Second Wind AC) and Arata Fujiwara (Proposer Japan), and upcoming issues including interviews with Tsutomu Akiyama, Eiji Kobayashi and Takeyuki Nakayama.

Part One: Discovery, High School and University
I first came to Japan in 1990, in December. I came here to test myself. When I was in Kenya I ran in the Kenyan Secondary School Championships. I was the top at cross-country. There was a Japanese there, the one who introduced Wanjiru to Sendai Ikuei [High School], Mr. Kobayashi. He had spotted me, and told me, “You come and see how Japan is. You can train for two months and then come back.” But I came and then stayed forever. (laughs)

At first, in Japan in 1990 there were not many Africans. I had a problem when I came at first, you know, I was staying in Yamanashi. Most of the people, they didn’t care to see a black man walking around because it was a rural area. Some of them, sometimes, some of the kids, they were running away! (laughs) It was because they were not used to Africans too much, but once they started to see me in magazines and on television they went, “Oh, this is the person we see,” and they got used to me. Even myself, also, I was afraid to talk with them because I didn’t know Japanese. Some of them when I would go into a shop they would panic and say, “Oh no no no no no!” And I’m, “But I want to buy something!” (laughs) It was because of the communication.

In that situation I felt very homesick for a time because there was no one I could consult about something, and the language was making things very difficult. That led me to study Japanese more and more, and so in university I went to Japanese language school. I’d train by myself in the morning, eat breakfast, go to language school, from there I’d go to university, from university I’d go another 8 km, train there and then take my bike home because we were cooking for ourselves. This was regular, but it was difficult day to day because we’d become very tired. It was very difficult times when I was in Yamanashi, but I see now, that’s life. I did meet some foreign students at Japanese language school and then we could talk. Black men? It was only me. I was the only black man there. There were some students from Finland, France, some Indians.

Those ones who come now, they’re enjoying it, but those who came first, we suffered a lot, but we suffered for them because we opened the way for them. Now what they’re earning is because of us. If we couldn’t stick it out, if we left and said, “No, Japan is bad,” most of the Japanese, they would say, “Ah, no, Africans, they cannot stay in Japan.” We sacrificed ourselves. But there are those ones who are coming now, I try to tell them that they should study Japanese, but they say, “No, there’s no use for studying Japanese because I don’t want to stay. There’s no way. My home is in Kenya.” But that doesn’t make sense because you are staying with these people and you have to study and communicate yourself with them, your masters who are employing you.

The main issue of coming to Japan in high school is that you come, you train with these people so that they can make times, they can be strong, not that you yourself want to be strong. You have to make Kenyans understand that they’re running in this way, for these athletes whose schools are paying for it. Some of those ones who are coming to high school, they are not very competitive. They are not very fast, so they come and they start the system and train very hard and become someone later. Like Wanjiru, when he came he was not strong. He was doing it three years, four years, and then he came to be strong. And like myself also, I was only running 29 or something like that when I came to Japan.

I think the change of going to high school and then the company, that thing has started recently. I think it’s no good, and I can say, “Study first, then go to companies.” Those ones who are going through university, they are better off than those ones who are going to a company direct. I see that it is very difficult, I see that it is very important they go to school somewhere first, and then to learn the system, better than somebody who comes direct. You spend a lot of time learning to speak and to read for four years, to understand, to communicate with your teammates.

Click here to read the full interview. Part two of the interview will be available over the weekend.

Rob Cunningham said…
I met Stephen after the Inter-university Ekiden Championships in 1994 ( I was on the IVY league team). He was a very nice guy, talking about how he couldn't wait to graduate and and race on the roads in the states. As I recall, he wanted to go to New Jersey for some reason... Looks like he made the right choice in staying
May 7, 2010 at 3:23 PM