Atsushi Sato on the Year From Beijing to Berlin

translated and edited by Brett Larner and Mika Tokairin

Atsushi Sato, 30, is Japan's best current marathoner with a PB of 2:07:13 from his 3rd place finish in the 2007 Fukuoka International Marathon where he raced Samuel Wanjiru and Deriba Merga. After melting down from stress a short time before the Beijing Olympics he finished last in the Olympic marathon. Since then he has been in a process of rebuilding himself physically and, more importantly, mentally. His sponsor company Chugoku Denryoku recently featured the following interview about his leadup to Saturday's Berlin World Championships marathon on its website.

Atsushi Sato ran the London Marathon as a preparation run for the August 22nd Berlin World Championships men's marathon, sealing his place on the national team with a 2:09:16 finishing time. We interviewed Sato about his year since the Beijing Olympics marathon. 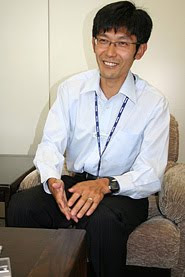 Congratulations on making the World Championships team. How did you feel about your tune-up at the London Marathon?
I'm glad I met my target of breaking 2:10. To be honest I wanted to run in the top group, but they told us beforehand that the leaders would be going out very, very hard so I made the decision to stick with the second pack of about eight no matter what. The first 10 km were too fast so we slowed down after that. After 32 km it got a bit hard, but I've run the marathon quite a few times before so I wasn't really concerned about making it to the finish in one piece. I just believed in myself, took my time and ran the kind of race I wanted to.

What kind of training have you been doing since the Beijing Olympics?
After the Olympics were over I was a wreck, physically and mentally broken from the shock of it. For a while I didn't think I could do marathons any more. At the same time, though, part of me felt like I should give it one more try. I didn't run well in Beijing because my health went bad a little while before. My physical condition completely collapsed and I started becoming afraid to train. To get over that fear I had to use a bit of force with myself; I challenged myself to race as much as I could to help me clear that barrier and get back some self-confidence. As a result I raced a lot this spring.

So that's why you did a lot of races in a short period of time?
Yes, and it worked. I knew that if I raced a lot and I was still in good condition afterwards then I could regain confidence. Also, to cope with this new era of high-speed marathons I thought I had to work on my own speed. To do that of course you have to run hard to some extent. When you race you have to run hard, so by using them as part of my training I was hoping it would help bring me around. At my age I think it's important to maintain the quality at a high level.

After the 2009 New Year Ekiden I wanted to spend this year getting competitive again. The London Marathon was the main goal for the first half of the year, so I told myself that I should run it to get my fitness back. Training for London I reduced the quantity of my training and just tried to fulfill what I absolutely needed to do plus some margin, and I always prioritized my health. I had nothing to lose in London and I thought that even if I failed I would be able to move on easily to the next target.

Now that we're in an era when the marathon has become a speed race I've realized that I should change my training methods. In London I asked overseas runners about their training and I found out that they don't do that much volume. In Japan we need more high-quality training to get better speed as part of our marathon training, but at the same time if you do high-quality speed training you will have more damage so it's very important to know your physical and mental condition as you train. 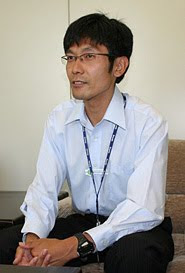 What's your goal in Berlin?
I'd like to go for the prizes. When I ran the World Championshis marathon in Paris I was 10th and only missed the top eight by 8 seconds. Compared to then the level of marathoning has gone way up and I can see clearly that this is going to be a high-quality race, even more so than Beijing. This time in Berlin it will be my twelfth marathon including DNF's. I want to use the experience I've gained to help me be as competitive as I can.

Do you have a message for your Chugoku Denryoku colleagues?
When you're by yourself you're very weak and you can't maximize what you do. I've been given the opportunity to train the way I do thanks to Chugoku Denryoku and everyone in the company. When my colleagues give me encouragement it makes me want to try harder. Please give me your support in Berlin and in the future.

Simon Phillips said…
Interesting reading. I've been waiting to see how the Japanese male marathoners would respond to the paradigm shift in marathon running that took place at last year's Olympics. I like how Sato appears to be wearing his office clothes in the photos too as if they just pulled him away from his desk for the interview!
August 22, 2009 at 3:27 AM