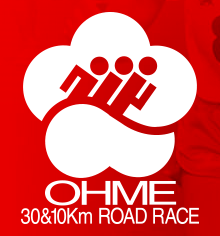 On Oct. 14 the organizers of Tokyo's Ome 30 km Road Race announced that the popular event's 55th running, scheduled for Feb. 20, 2022, will not go ahead and will instead be postponed a year. Organizers said that due to the ongoing coronavirus pandemic they had concerns about being able to stage the event in a way safe for runners, local residents, race staff and volunteers. The Ome 30 km's 55th running was originally scheduled for February, 2021 but was postponed to 2022, meaning the new decision will in effect be a two-year postponement.
The Ome 30 km Road Race was founded in 1967. Starting in the western Tokyo suburb of Ome, the race follows a mountainous route along the upper Tama River gorge and back. Featuring both 30 km and 10 km races, the race seen wins from Olympic gold medalists like Naoko Takahashi and Mizuki Noguchi, and is one of Japan's most popular races for amateur runners, with over 12,000 finishers every year. In place of the 2022 event, organizers will hold a virtual race.
Translator's note: Ome follows the Tokyo Marathon's lead in canceling. New case numbers in Tokyo have dropped into the double digits. Other large races elsewhere in the country including the Shimonoseki Kaikyo Marathon, Toyama Marathon and Kanazawa Marathon  have announced that they will hold their races before the end of the year, and others in the same time frame as Ome including the Nagoya Women's Marathon and Shonan Kokusai Marathon in Tokyo's neighboring prefecture of Kanagawa are also planning to go ahead. In the face of the dramatically improved numbers and studies showing that mass-participation races are not a significant source of spread when staged with proper protocols, the cancelation of two major races in Tokyo, especially one as far away as February, suggests that there is more to this story
source article:
https://news.yahoo.co.jp/articles/87501a6c4b5c5e87f3d92fcd861054edf8307496
translated and edited by Brett Larner