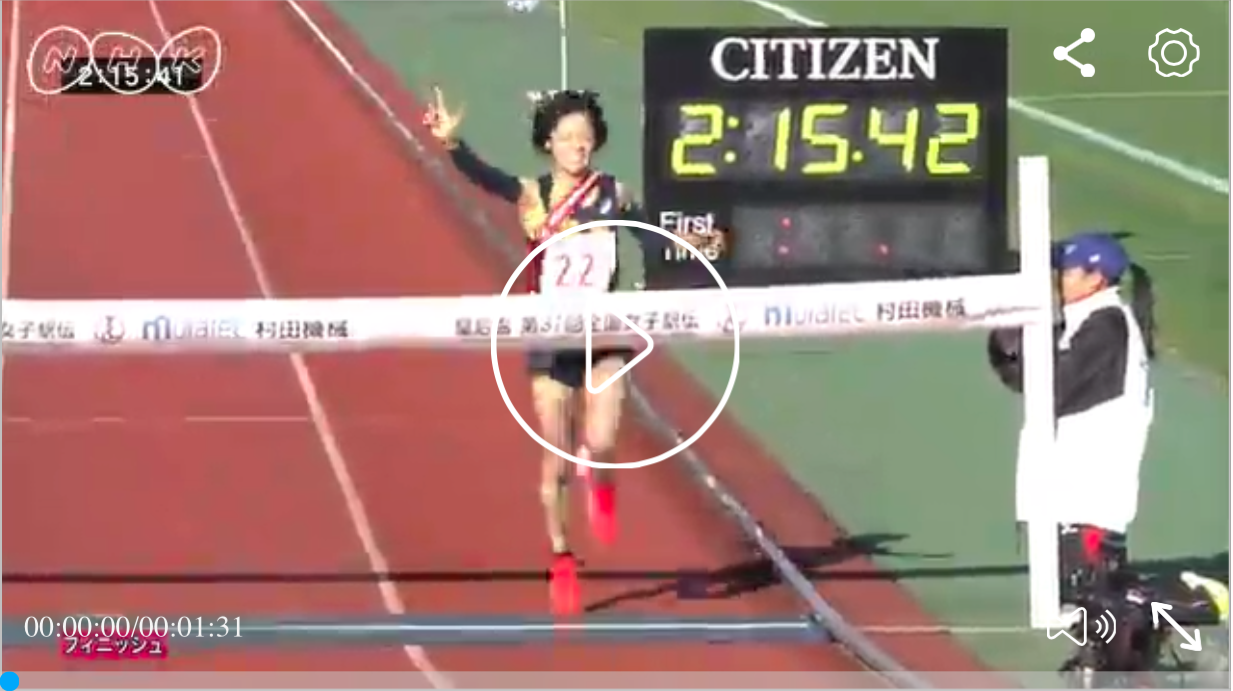 Coming back from a win in her marathon debut at last August's Hokkaido Marathon, 2016 10000 m national champion Ayuko Suzuki anchored the Aichi prefecture team to the National Women's Ekiden title in a back-and-forth race with hosts Kyoto. An entertaining format with teams made up of the best junior high school, high school, university and pro runners from each of Japan's 47 prefectures, the National Women's Ekiden and its male counterpart next weekend in Hiroshima make up the peak of championship ekiden season.

Aichi took the lead on the second of the day's nine stages thanks to a stage win by high schooler Yumi Fujinaka and from there to the end was never out of the top two. After a brief challenge from Chiba Aichi didn't get its first real threat until Kyoto pulled up even on the Fifth Stage, both teams handing off simultaneously to the Sixth. Kyoto fell as far as 26 seconds behind over the next two stages, but junior high schooler Koko Kamada made it up on the 3.0 km Eighth Stage to run down Aichi's Nayu Hayashi and even open a two-second lead.

Kamada set up a great anchor stage battle for the sin, with Suzuki starting for Aichi just behind Kyoto's Mao Ichiyama, one of the best of the younger corporate generation. The pair stayed locked together until around 7 km into the 10 km anchor stage, Suzuki splitting 15:56 at halfway to Ichiyama's 15:58. Then Suzuki got down to business, dropping Ichiyama with ease and opening more than a minute on her over the last 3 km. Suzuki's 2nd half split of 15:12 was unmatched in the field, more than enough to bring Aichi home for the win and a good sign that she has handled the recover from her marathon debut well.

But Suzuki aside, most of the day's best running was to be found outside Aichi, and most of it by the younger runners in the field. With corporate league women on six of the nine stages six were won by high school students, two by junior high schoolers, and one by a club runner. And that's part of what makes the National Ekidens' mixed-aged formats so entertaining. Top-ranked high schooler Ririka Hironaka (Nagasaki) outmuscling Diamond League runner Rina Nabeshima (Kochi) and National Corporate Women's Ekiden First Stage winner Kaori Morita (Kanagawa) to win the First Stage? Sure. Relatively unknown high school runner Narumi Kobayashi (Nagano) going head-to-head with two-time defending 10000 m national champion and 2:22 marathoner Mizuki Matsuda (Osaka) in pursuit of 2:21 marathoner Yuka Ando (Shizuoka) and easily dropping Matsuda in the last kilometer to win the stage on time? Why not?


There was so much good running it was hard to pick a highlight, but along with Suzuki, Hironaka and Kobayashi there were two other clear choices. The junior high school student who ran Aichi down to briefly put Chiba in the lead on the 3.0 km Third Stage, 14-year-old Hinata Minami, was a joy to watch, her long, graceful stride carrying her to a course record 9:10. Suzuki aside, the Third Stage winners rarely survive the transition to senior running. In Minami's case she just exuded a sense of future, so let's hope she's another exception to the rule and that there are years more ahead for her.

At the opposite end of the spectrum, the rescendent Hitomi Niiya followed up her brilliant East Japan Women's Ekiden anchor stage course record and Zatopek:10 win to beat Suzuki for the anchor stage title. Running the way she knows best, Niiya went through halfway in 15:30 almost dead even with Kayoko Fukushi's course record split. She faded slightly over the second half but still came in faster than Suzuki, passing seven competitors en route to a 31:06 stage win and 9th-place finish overall for Tokyo. Niiya is targeting the 2020 Tokyo Olympics 10000 m in her comeback from 5 years of retirement. Most of her strongest competition for the team may be headed for the marathon, but this trio of performances shows that she is still the one to beat.