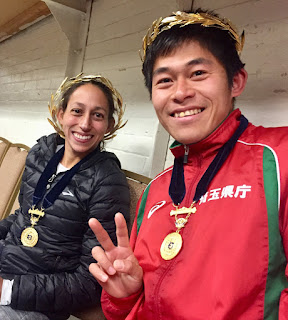 It's been 122 days since the 122nd Boston Marathon. Of what the two exceptional people who won that day accomplished, William Shakespeare summed it up better than any other commentator in his Sonnet 122:

Beyond all date, even to eternity;
Or at the least, so long as brain and heart
Have faculty by nature to subsist;
Till each to razed oblivion yield his part
Of thee, thy record never can be miss'd.

What else needs to be said? But the other thing that remains from that day is, of course, this:


In the 122 days since Boston this clip has been on my mind a lot. The commentary here by Larry Rawson and Al Trautwig was exceptionally bad, but it wasn't unique to them and highlighted many of the problems with marathon TV broadcasts and especially their hosts and commentators. I'm fortunate to live in Japan where the announcers for the countless marathon live TV broadcasts are, sorry, Brits, hands down the most knowledgeable, engaging and professional in the world. Ultimately it comes down to one key thing: they understand what their job is.

And what is that? A broadcast is a product designed to attract and retain customers. Value to advertisers and other sources of income for the broadcaster is relative to the audience size. An announcer or commentator is performing their job correctly to the degree that they are contributing to that value by engaging and retaining viewers. Where they are engrossed in and engaged with the race they are talking about, that transmits to the audience and increases its level of engrossment in and engagement with the broadcast. Toni Reavis' commentary on Samuel Wanjiru's final race, the 2010 Chicago Marathon, comes to mind, a rare example of an American marathon broadcast that was actually better than the Japanese broadcast of the same race for the single reason that Reavis' obviously genuine excitement made the race more exciting.

Condescension and negativity may well be the dominant mode of our era, but where commentators display condescension or negativity about or a lack of interest in the athletes or race, that's also going to transmit to the viewers and affect their view of the broadcast. In the case of the Rawson/Trautwig clip, how did their condescension and negativity contribute to an increase in value in terms of audience engagement? Casual viewers who might have thought, "Huh, this guy's really balling," would have heard them, gone, "Oh," and had whatever passing interest they might have had killed. More knowledgeable fans of the sport would have had exactly the kind of reaction you can read in the responses to the above tweet, i.e. that the announcers are totally unprepared and/or have no idea what they are talking about. Either way, they are serving to detract from the value of the broadcast, not to enhance it.

This seems like a very basic point, but it has to be reiterated: as a broadcast announcer or commentator, your job is to enhance the value of the broadcast, not to detract from it. Beyond the tone with which you present yourself, part of that is being prepared for the job you're being paid to do. As the responses to the Rawson/Trautwig tweet show, the audience can tell when an announcer has only brushed up on who the "stars" are and hasn't bothered to look at the rest of the field in any depth. It's hard to imagine that being acceptable in most other sports, but it's pretty much the norm in most marathon broadcasts despite the unpredictability in the marathon.

It's not hard to do the necessary prep work. I know from my own experience. The last three years I've been the announcer on the Tokyo Marathon's international broadcast. Not to put myself up as a role model, but when I got those gigs I spent the two or three hours it took each time to look up every single athlete in the elite fields and upper end of the sub-elite fields on my own, independently of the info I got from the network, and put relevant performances and info into a spreadsheet that I could have at my fingertips during the broadcast to help communicate and contextualize what was going on to the audience. If you're being paid thousands of dollars to do the job anything less would be lazy and unprofessional. I was genuinely surprised to see industry people like David Monti describe my commentary as "well-informed" as it seemed like doing this kind of basic prep should be a given. If you don't and anything other than exactly what you are expecting happens then the quality of the broadcast can only suffer.

Some of the lack of familiarity commentators show with athletes in the race may be due to the exigencies of a producer's whims and some to the confusion that can happen in a tight pack race, but there's also an element of lack of interest in who people are and, as a result, in what they're doing. Whatever the announcer's actual feelings, conveying a lack of interest in what's happening is also a common problem that decreases a broadcast's value. If the announcer doesn't care about the race why should the audience? Case in point, the European Championships marathons. I'll post a video if I can find the clip, but as the race progressed the lead announcer, whose name escapes me, started going off about Michael Caine. "If you've been watching these Championships then you'll know that I'm something of a film buff," he chortled away. This lack of interest in what was happening sent the message to the audience that it probably wasn't worth paying attention to.

His assumption that he himself was more interesting than the action in the race was another common problem, but to rephrase something I said earlier, commentators are valuable to the extent that they enhance the value of the broadcast. There are very few people in the sport in a position to do that just because of who they are. Most commentators don't fall into that category, whatever they think of themselves and however long they've been at it, and if they're not actively engaged with the race chances are that whatever else they're talking about is not going to increase audience engagement.

Japanese announcers aren't perfect, but to a greater extent than anyone else they have these issues sorted. Don't believe me? Simple, learn Japanese and see for yourself. The Rawson/Trautwig commentary at Boston actually made the news in Japan simply because it would be completely unthinkable here. Japanese announcers understand the role of their jobs in increasing the value of the broadcast, and the results of their engagement in and respect for what they do speak for themselves. Let's see more of that kind of professionalism in marathon broadcasting everywhere else. Do your homework. Be interested in the race. Don't talk it down. Only good can come of it.

Andrew Armiger said…
Nailed it. I find US marathon broadcasts unwatchable, as a rule, due to the networks' typical choice of commentators and the typically lax approach of those commentators. If I watch, I usually mute.

Another plus for watchers of Japanese marathon broadcasts, such as I with little working knowledge of Japanese, is the quality of production with on-screen graphics for time, pace/speed, comparative km and 5km splits, athlete PRs, etc. All the info is there for my eyes, which can digest the data better than my ears can.
August 16, 2018 at 10:41 PM

Yokohama said…
I agree completely. I live and work in South Korea, and even here the difference between the US and Korea is night and day for marathon TV coverage.My only complaint is the TV commercial breaks. I also watch most Japanese marathons and ekidens on Japanese TV and the coverage is world class, no one, in my opinion comes close.
August 17, 2018 at 10:26 AM

Yokohama said…
I haven't talked about this but how the Boston marathon commentators handled Yuki at the beginning of the race was a travesty. A very clear example of how they didn't do their homework or how they didn't research all of the elite field. They just focused on the returning champion and the guy from Nike who I don't want to mention. Very poor reporting. He's runs New York, he runs everywhere, yet they acted like he was a showboat. Clearly not doing their homework and being very simplistic and lazy in the reporting.
August 18, 2018 at 10:37 AM

Anonymous said…
I agree with the other comments, and like the other person mentioned I enjoy watching Japanese marathons even though I don't speak Japanese (though my son does). But I think I should point out that Bill Rodgers gets this. He was clearly well ahead of any of the announers, noting he specifically worked hard to bring Yuki to Boston. Bill understands the type of runner Yuki is and what the Boston course demands of a runner -- I think all those thousands of miles Bill ran when there was no prize money can clarify one's thinking.

Sarah said…
100% agree. The major US networks are shooting themselves in the foot by hiring announcers who don't know and appreciate the sport.
August 22, 2018 at 8:12 AM