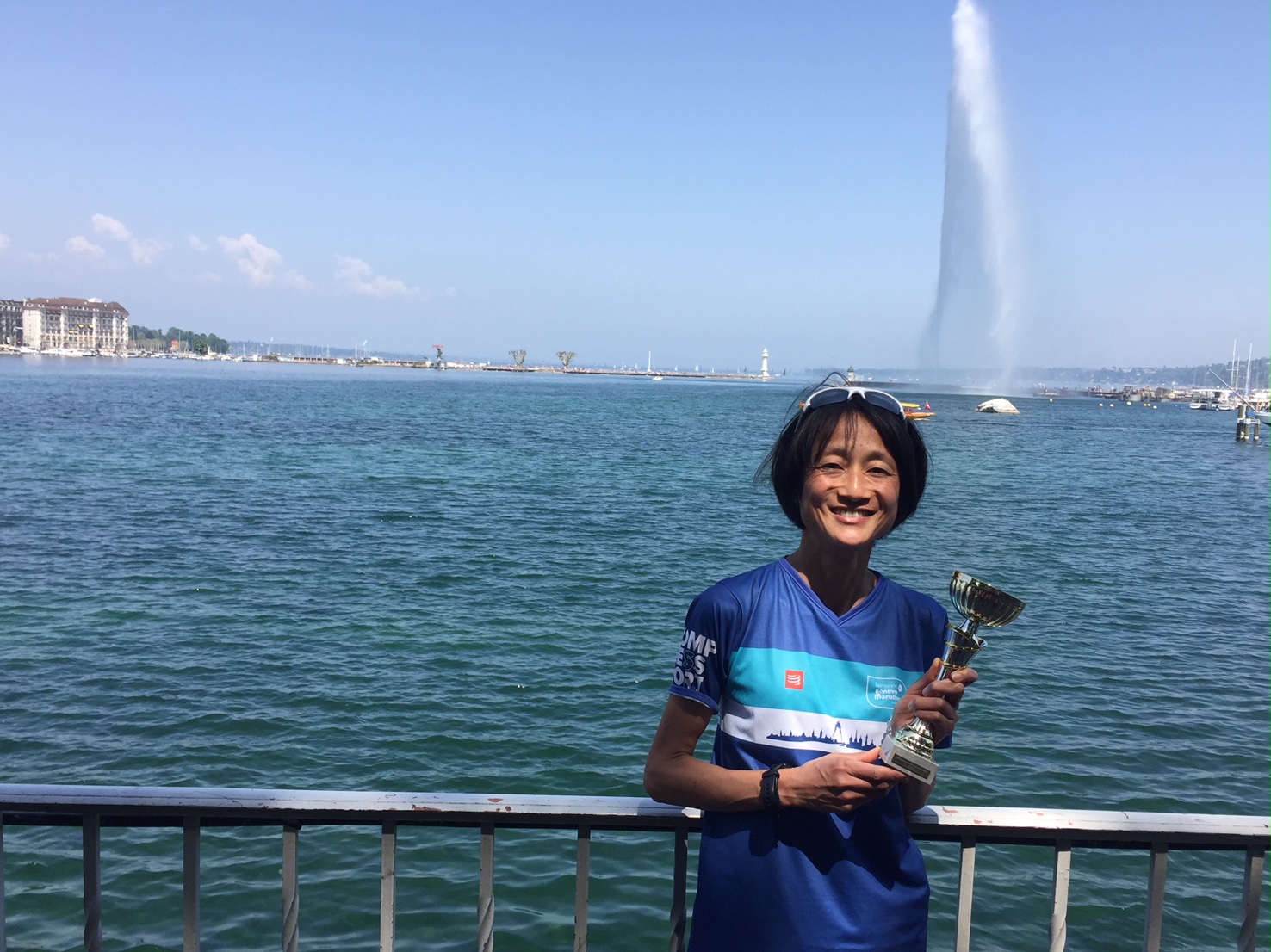 Recording what may have been the only negative split in the entire field on a hot day illuminated by piercing sunshine, Japan's Hisae Yoshimatsu (Shunan City Hall) ran down half the Harmony Geneva Marathon elite women's field in the last 15 km of the race to take 2nd in 2:39:30.

Running with support from JRN, Yoshimatsu and 2017 Osaka Marathon runner-up Mitsuko Ino (Team R2), a late addition to the field a week before the race after another athlete scratched, fell off the African quartet of Ruth Waithera (Kenya), Fekadu Amelework (Ethiopia), Lema Alemitu (Ethiopia) and Berha Lemelem (Ethiopia) in the first few km. Running her marathon debut, Waithera made an early break to drop the Ethiopian trio. The Japanese pair worked together through the first half but were over three minutes behind the leaders at the halfway mark. 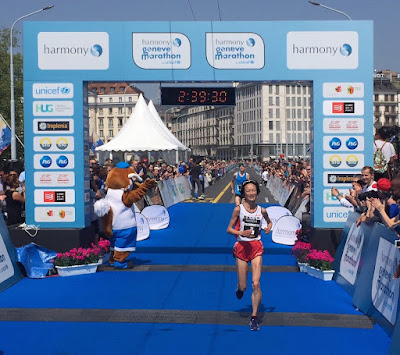 From there Yoshimatsu went to work on the course's long downhill stretch along the French border, dropping Ino and overtaking Lemelem. The remaining trio were still over a kilometer away as she headed for the steeper downhill the final lakeside kilometers, but as Yoshimatsu accelerated toward central Geneva first a fading Waithera and then Alemitu came back into sight. Amelework stopped the clock first in 2:38:05, but Yoshimatsu was close behind. Splitting 1:21:32 at halfway, Yoshimatsu's final finish time gave her a second half of 1:17:58, no small feat given the tough conditions. 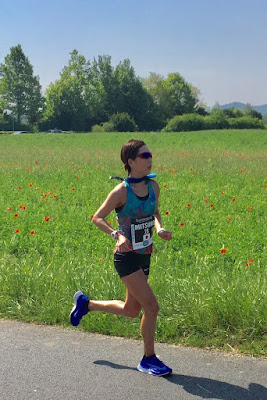 Behind her Ino struggled in the heat but maintained position, overtaking Lemelem for 5th just before Lemelem dropped out and holding that spot all the way to a 2:48:18 finish. "Hot weather kills me," she said post-race. "I have to find a really cold race to run later in the year." 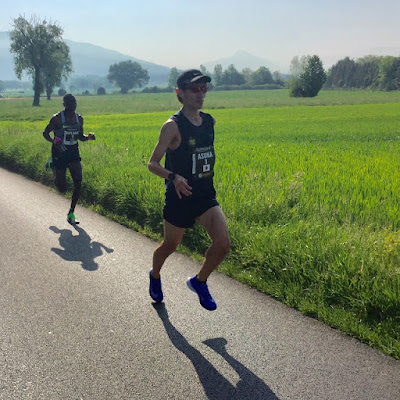 Most of the men ended up feeling exactly the same way. The opening 2:08 pace was too hot for 2:10:13 man Asuka Tanaka (Yutori RC), who sat back in 8th with first-timer James Kiplagat (Kenya) in hopes that the lead pack would fracture later in the race. Which it did, piece by piece, shaking down by halfway to a duel between defending champ William Yegon (Kenya) and 2:08 man Joseph Aperumoi (Kenya). 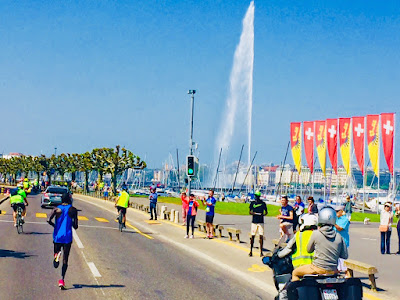 Yegon tried to push the gentler downhill slopes early in the first half to keep things on sub-2:10 pace, but along the lakeside he slowed, particularly after Aperumoi dropped way. His win was never in question, though, a 2:12:10 good enough to give him a second-straight Geneva title. Aperumoi faded to 2:13:54 for 2nd, with only two other runners clearing 2:20. Farther back, Tanaka experienced some internal problems and had to stop in a toilet at 28 km. Even so he got back on track well enough to run down two people in the last 5 km, picking up 6th in his international marathon debut despite a 2:26:29 finishing time. 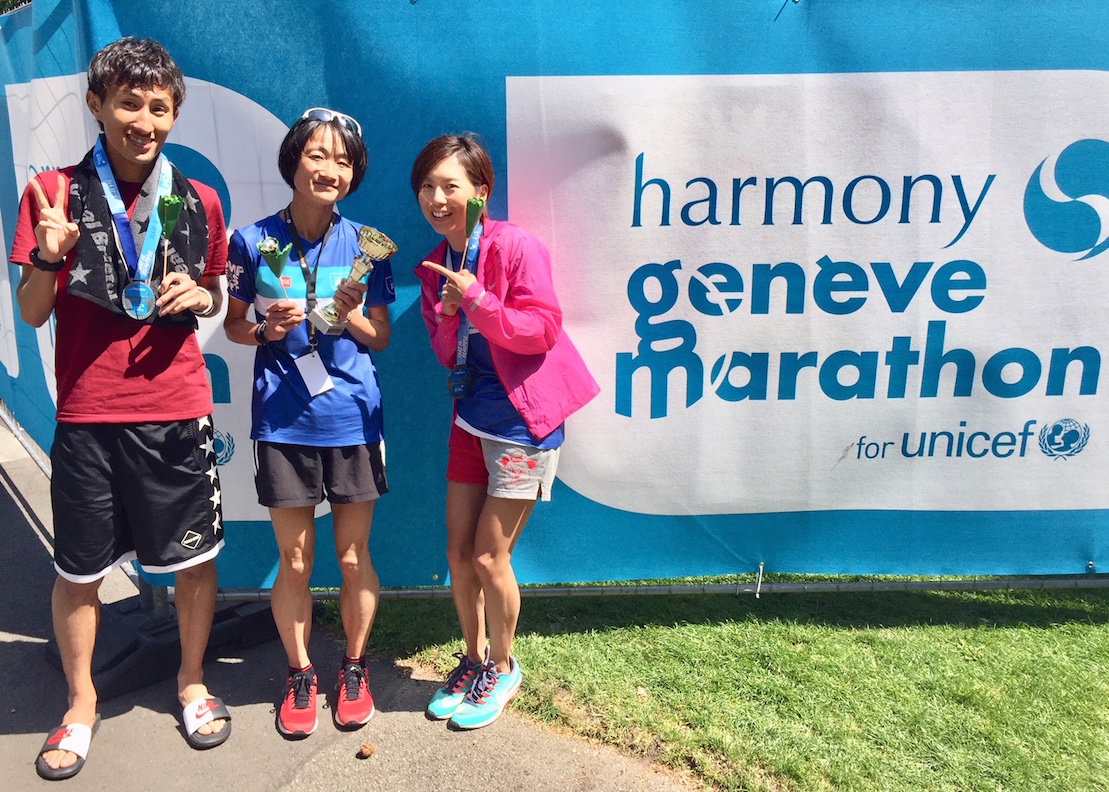