February 21, 2017
text and photos by Tsukasa Kawarai
translated and edited by Brett Larner

2012 London Olympian Arata Fujiwara (Miki House) has had some of his greatest races at the Tokyo Marathon, finishing 2nd three times: an explosive 2:08:40 breakthrough there in 2008, 2:12:34 in sleet and strong wind in 2010, and his 2:07:48 PB in 2012 to make the London team. He has also done some of his worst marathons there, running 2:29:21 in 2011, dropping out in 2013, 2:30:58 in 2014, 2:19:40 in 2015 and 2:20:23 last year. The blindfolded-shot-in-the-dark quality of Fujiwara’s history in Tokyo has always made him unpredictable but entertaining. In preparation for this year’s Tokyo Marathon Fujiwara trained in Kenya for nearly two months. Tsukasa Kawarai spent time at Fujiwara’s training camp in January, and ahead of Sunday’s race he wrote a report for JRN on what he saw of Fujiwara’s preparations. 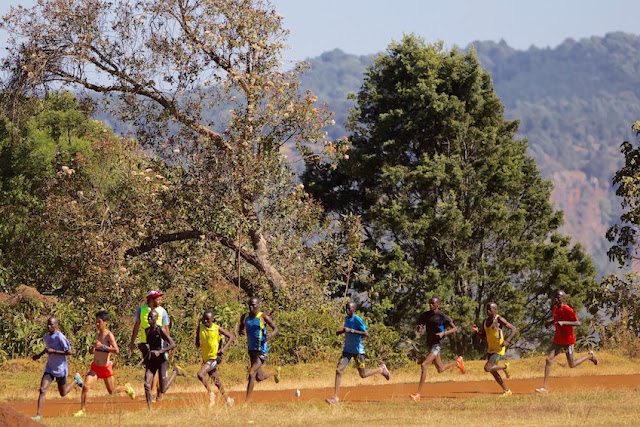 Starting in mid-December last year Arata Fujiwara trained in Iten, Kenya for about two months. It was his second time to train in Iten, his goal this time to build up a solid base in preparation for the Tokyo Marathon. Fujiwara injured his knee in June last year while training for the Gold Coast Airport Marathon. The injury that kept him from doing the kind of running he wanted for several months, but he came to Iten to make a full recovery from that setback.

It takes several weeks to adapt to high altitude training at 2400 m. Being the dry season it hardly ever rained in Iten, meaning very dry conditions. In the rough terrain around Iten, a passing car leaves you completely covered with dust. Amid this kind of tough environment, Fujiwara worked hard alongside the Kenyans. 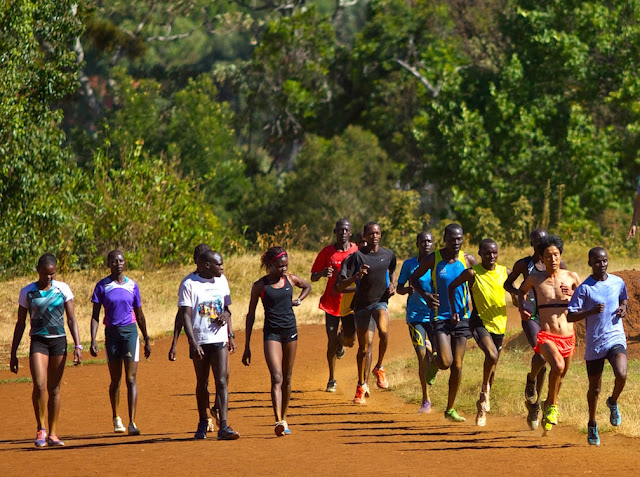 In Iten Fujiwara chose locals Edwin Kiprop and Benerd Koech, a different athlete from Tokyo Marathon invited elite Bernard Koech, as his training partners. He ran together with them and in a larger training group during interval workouts at Kamariny Stadium and for long runs.


I accompanied Fujiwara to Kamariny Stadium for a high-quality interval session of 600 m x 15 led by Kenyan runners. With weeks of that kind of training behind him in Iten he looked to me like the Fujiwara of old, when he was in his best shape. 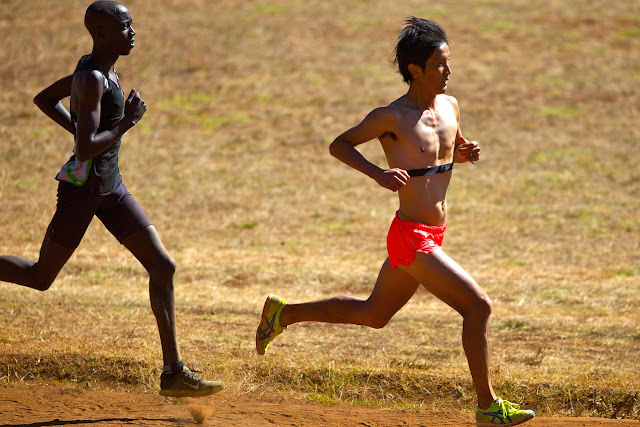 Fujiwara wasn’t the only one training at Kamariny Stadium. Many Olympians regularly do tough workouts there, a daily fact of life that makes Iten “The Home of Champions.” At the same time that Fujiwara was doing his interval workout, Wilson Kipsang was also training with a group in prep for Tokyo. Paul Chelimo was there from the U.S.A. too with a group of his own. “This is where runners with the highest ambitions from here and abroad come together,” Fujiwara said. 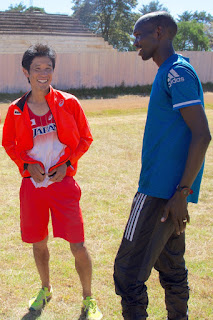 After the workout Fujiwara chatted with Kipsang. They both ran the London Olympics marathon. Both of them will run the Tokyo Marathon deadly focused on making this year’s London World Championships. To run again in the city of London.

The Tokyo Marathon has changed its course this year to what is being called a “high-speed course.” The late-stage hills of the old course are gone, and the expectation is that people will be slowing down less in the second half. With highly-developed racing intuition born from long experience I expect to see Fujiwara run an aggressive race and a long-overdue sub-2:10. 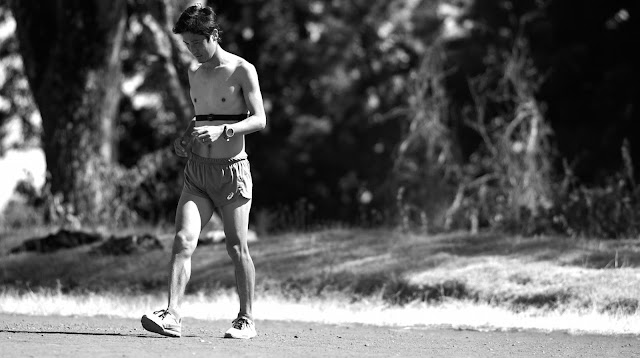 TokyoRacer said…
You've got to give him a lot of credit for consistently working hard and aiming high. I hope he has a good race.
February 21, 2017 at 12:21 PM

August 09, 2022
The 75th edition of Japan's National High School Track and Field Championships took place last Wednesday through Sunday at Pocari Sweat Field in Naruto, Tokushima. Kenyan Caroline Kariba (Kamimura Gakuen H.S.) was the star of the meet on the girls' side, winning all four races she started over the course of the week. On the first day of the meet Kariba ran the fastest time in the four 1500 m qualifying heats, 4:20.08. The next day she was back to win the final in a PB 4:08.72, almost 3 seconds head of runner-up Janet Nyiva  (Kurashiki H.S.) and nearly 9 seconds ahead of 3rd-placer Kana Mizumoto (Osaka Kunei Joshi Gakuin H.S.). After a day off racing on Friday, Kariba was back Saturday to lead 3000 m qualification in 9:12.17, the fastest time in the 3 heats. Sunday she took the final, just missing the meet record in 8:52.04. Nyiva was 2nd again in 8:56.20, just holding off Lucy Nduda (Aomori Yamada H.S.) who took 3rd in 8:56.91. Mizumoto was the top Japanese woman again at 4
Post a Comment
Read more

August 10, 2022
On Aug. 8 Tokyo Olympics marathoner Yuma Hattori (28, Toyota), announced on his Twitter and Instragram feeds that he had gotten married with Chukyo TV announcer Miyabi Hirayama , 31. Along with a picture of the two of them in Nagoya's Hisaya Odori Park dressed in jeans and t-shirts he wrote, "We submitted our registration of marriage today, August 8." Hirayama tweeted, "My married life will be a new source of energy in my devotion to my work!" On Instragam she wrote, "He is always looking forward and gives everything in pursuit of his goals. I respect him completely. He is incredibly kind and gentle toward me and it makes me smile just to be around him. It's a joy to be able to walk the rest of my life's road with him." The Chukyo TV Athlete Friends program on which Hirayama had interviewed Hattori in April tweeted, "Miyabi Hirayama and Yuma Hattori, congratulations on your marriage. May your happiness last forever." Along with a cl
Post a Comment
Read more

August 08, 2022
Along with Akita's Towada Hachimantai Ekiden another midsummer classic returned Sunday after cancelations in 2020 and 2021, the 47th edition of the  Mt. Fuji Ekiden . An eleven-stage race featuring 82 teams of six, the Mt. Fuji Ekiden sees the first five runners on each team work their way up the slopes of Mt. Fuji, first on roads and then on trails. The sixth runners climbs the final few kilometers to the summit 3258 m above the race's starting point, has his tasuki sash stamped by a priest at the shrine waiting there, then begins the descent. The first five runners then have to each a second time, downhill this time. Some of the downhill stages are wild, with powdery gravel covering steep slopes, and scenes like this one from 2014 at the exchange from the Seventh to Eighth Stage, are legendary. Spectators make the climb to the exchange zones just to see it happen. Doesn't it look like fun? The video up top is from the last edition in 2019 , when the Takigahara SDF Base
Post a Comment
Read more