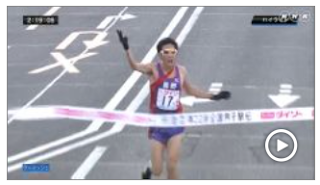 Six-time national champion Nagano extended its dynasty to seven, fighting off a tough challenge by Fukuoka on the anchor stage to win the 22nd edition of the National Men's Ekiden in Hiroshima. The counterpart to last weekend's National Women's Ekiden, the men's race features 47 seven-man teams made up from the best junior high school, high school, university and corporate league runners from each prefecture, all competing over a total of 48.0 km.

Nagano got off to a strong start as its lead runner Yuhi Nakaya took 2nd on the 7.0 km high school boys' First Stage, 3 seconds behind leader Kiseki Shiozawa of Mie.  Defending national champion Aichi and Fukuoka were more than 20 seconds back in 19th and 20th, but with solid runs by their 3.0 km junior high school Second Stage runners both advanced into the top 10. Behind them, Nagasaki's Hiroto Hayashida went from 41st to 27th as he broke the course record by 9 seconds in 8:20.

The 8.5 km Third Stage featured a mix of university and corporate league talent.  A chase group of seven formed behind leaders Kyoto and Gunma, with Aichi's Kosei Yamaguchi emerging to put the defending champs into 1st by 3 seconds over Fukuoka with Mie and Nagano within 2 more seconds and another five teams close behind.

Over the next two high school stages Nagano and Fukuoka developed into the clear leaders, 12 seconds apart and a margin of nearly 45 seconds over the rest of the field by the handoff to the 3.0 km  junior high school Sixth Stage.  There Fukuoka's Safumi Sugi ran down Nagano's Ryosei Sanada and putting Fukuoka 2 seconds ahead at the start of the anchor stage.  Mid-field, Kazuki Matsuyama of Tochigi ran a course record 8:29, meaning new sub-8:30 CRs on both of the day's junior high school student stages.

The 13.0 km anchor stage featured most of the big-name university and corporate league talent.  Anchoring Fukuoka was Yuki Oshikawa, runner-up on the New Year Ekiden's Fifth Stage.  For Nagano, Yuichiro Ueno, runner-up on the Third Stage at the New Year and with multiple winning anchor runs for Nagano behind him at the National Men's Ekiden.  Oshikawa started strong and it took several kilometers for Ueno to catch him, but when he did Ueno threw in a surge to get ahead without argument.  Oshikawa did his best to hang on, but as the kilometers clicked by Ueno used his experience on the course to take full advantage of the undulations on the many bridges around Hiroshima's Peace Memorial Park, edging away a second at a time.  In the end he opened 19 seconds on Oshikawa to give Nagano a record seventh national title in 2:19:09, Fukuoka still ending up with its best performance in years.

Behind them, fans got what they wanted with a four-way battle for 3rd between four popular young Hakone Ekiden stars.  2016 Aoyama Gakuin University graduate Daichi Kamino ran for Aichi, AGU 4h-year Tadashi Isshiki for Kyoto, AGU 3rd-year Yuta Shimoda for Shizuoka and Juntendo University 2nd-year and Rio Olympian Kazuya Shiojiri for Gunma.  For the first 10 km all four ran together, all but Kamino taking turns leading.  On a small bridge near 10 km Kamino suddenly attacked with a surge that dropped Shiojiri and Shimoda.  Isshiki hung on for over 2 km, but in the last km Kamino was too strong, pulling away to take 3rd in 2:20:31 to Kyoto's 2:20:37.  Not showing much sign of the 42.195 km training run he did in 2:27:35 last Sunday, Shimoda likewise dropped Shiojiri to give Shizuoka 5th in 2:20:51.

With championship ekiden season a wrap many of the top university and corporate league runners now turn to the half marathon and marathon.  Many will line up at the Feb. 5 Marugame Half Marathon.  Shimoda, the under-20 marathon national record with a 2:11:34 debut at age 19 in Tokyo last year, will run Tokyo again next month in a bid to make the London World Championships team.  Isshiki, who likewise debuted in Tokyo last year, will do the same a week later at the Lake Biwa Mainichi Marathon.  Joining Shimoda in Tokyo will be this year's National Men's Ekiden anchor stage winner, Yuta Shitara of the Honda corporate team in his debut.