Makau Repeats, Sasaki on the Cusp of Olympic Selection at Fukuoka International Marathon 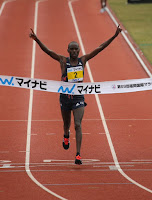 by Brett Larner
photos by @rikujolove

Former world record holder Patrick Makau (Kenya) was back to take out tough competition and score a second-straight win at the 69th running of the Fukuoka International Marathon, with Kyushu local Satoru Sasaki (Team Asahi Kasei) emerging at the top of the home soil field to land as a candidate for the Rio Olympic team after favorite Yuki Kawauchi (Saitama Pref. Gov't) ran into trouble early. 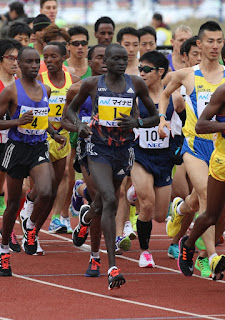 World record holder Kimetto was the first casualty, out of the lead group in the first few km and dropping out just after a stunningly lackluster 16:20 first 5 km in his second-straight marathon DNF. After having vowed not to go out at an unrealistic pace Kawauchi, the popular favorite to finish as top Japanese man even if short of the JAAF sub-2:06:30 standard for Rio auto-selection, was next, weaving and grimacing in pain just after 10 km and losing touch near 11 km. 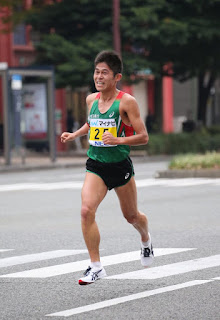 Kawauchi continued to drop back, overtaken by the second pack near 15 km and unable to follow. Tsegay and a few other Japanese hangers-on also faded, leaving eight up front at halfway skimming just under 2:07 pace in 1:03:29. Tomaru, 2:11 in his first two marathons, was next to drop. Unexpectedly, the last two pacers, apparently scheduled to run to 30 km, both stopped at 25 km, causing some surprise and confusion for both the lead pack and the race broadcast announcers. The pace immediately slowed, the next 5 km taking 15:32 compared to the average splits of 15:04 up to that point, but despite this both Takada, 2:10 in his last two runs at Fukuoka, and 2013 winner Mathathi struggled to hang on and lost touch near the turnaround. It was down to four.

Sasaki, part of the Takeshi Soh-led powerhouse Asahi Kasei team and apart from Kawauchi the only Japanese man in the field to have broken 2:10 since 2012 with a 2:09:47 PB for 2nd at last year’s Lake Biwa Mainichi Marathon, looked strong and smooth, covering the first few feints from Makau, Koech and Feleke. Just before 35 km a move from Koech spurred Makau to make his own, and like that the Kenyan pair had a 3-second lead over Sasaki and Feleke. Further back, Kawauchi’s fortunes turned around when he did the same, picking up the pace to go back under 16:00 per 5 km and picking up stragglers from the front two packs one by one. Just before 35 km he caught Yoshiki Otsuka (Aichi Seiko) for 7th and, with nobody else in sight, cut back to work together with Otsuka for the rest of the race.

Makau and Feleke ran side by side for a few km, but with 5 to go Makau said goodbye with a surge that snapped Koech. Backwardly mobile, as Koech came into range Feleke surged to pass, likewise snapping the bond with Sasaki who a few seconds later overtook 2:04 man Koech for 3rd. Makau looked to have it down safely, but Feleke quickly moved up to within less than 10 seconds before Makau noticed and responded with one last surge to score the win in 2:08:18, a far cry from his best days but a 4-second improvement on last year and a return to form after his DNF in Boston in April and the unexpected mid-summer death of his manager Zane Branson. 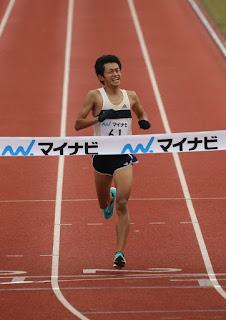 Feleke took 2nd in 2:08:31, but the crowd’s focus was on Sasaki, already on the track for the finish and on the edge of going under 2:09. Digging down he found what he needed, 3rd in 2:08:56 and putting himself into contention for the Rio team. Koech was the only other man to break 2:10, 4th in 2:09:43, with Takada taking 5th in 2:10:55, his third-straight Fukuoka 2:10, just ahead of Brazil’s Paulo Roberto Paula.  Otsuka and Kawauchi came onto the track together, and in a rare sight Kawauchi had nothing to give to drop a Japanese rival. At 200 m to go he briefly tried to kick, but Otsuka had enough in reserve to respond over the curve and drop Kawauchi in the home straight, 2:12:46 to 2:12:48 for 7th and 8th. 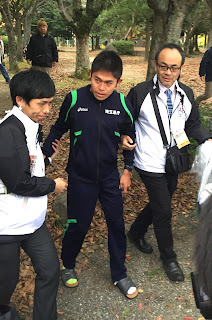 Having said that this would be his only shot at the Rio team and that he does not expect to try for Tokyo 2020, Kawauchi’s Olympic dream was in tatters. Gaunt and gutted post-race, he was faced with a wall of paparazzi outside the finish area who hit him with a barrage of questions. What had happened? Would he still run Hofu in two weeks? Would he run Tokyo or Lake Biwa to try again for the Rio team? What about his plans to run April’s London Marathon? Almost in a daze, he could only say that he had experienced pain in his calves early in the race, a possible remnant of his injuries earlier in the year, before walking away through the woods with the support of two race officials, the thicket of cameras in pursuit.

For Sasaki, his Olympic hopes rest right on the knife’s edge. 2:08:56 and 3rd is a solid enough performance to get him on the team, especially with Asahi Kasei executive head coach Soh leading the JAAF men’s marathoning program and in an influential position with regard to team selection, but at the same time it’s well within range of the stronger Japanese fields expected at the remaining two Olympic selection races, February’s Tokyo Marathon and March’s Lake Biwa Mainichi Marathon. In 2008 Arata Fujiwara (JR Higashi Nihon) was 2nd in Tokyo in 2:08:40 but wasn’t picked for the Beijing Olympics team after Satoshi Osaki (NTT Nishi Nihon) ran 4 seconds faster the next weekend at Lake Biwa. Sasaki has a stressful three months of waiting ahead of him.

Metts said…
Looking at the overall results, Japan continues to thrive seemingly with a large amateur base of runners. I did notice they cut the finishers off at 2:48. I guess its good to maintain some marathons with a higher finish quality than the mass participation events.
December 7, 2015 at 12:20 PM

trailblazer777 said…
Hopefully Kawauchi has another go at it and his calves play nice.
December 8, 2015 at 9:36 AM