This Sunday Japan's three-part domestic selection race series to choose its men's marathon team for the 2016 Rio de Janeiro Olympics kicks off with the 69th running of the Fukuoka International Marathon.  Fukuoka's elite coordinator typically sets up his races featuring one marquee international athlete to draw media attention and show the public that Fukuoka still matters to the rest of the world, with a second tier of internationals within a stone's throw of the top Japanese names in the field to help goad them on to quality times.

This year has that covered by the spadeful, with world record holder Dennis Kimetto (Kenya) coming in fresh from dropping out of the summer's Beijing World Championships after jogging a few kilometers.  It could just be an easy end-of-season payday, but the presence on the start list of 2:04 countryman Bernard Koech and sub-2:06 Ethiopian Getu Feleke suggests that Fukuoka wants an update to its 2:05:18 Japan all-comers record as Tokyo circles closer and closer to taking it away.  Would that make sense in a high-profile domestic Olympic selection race?  Not really, but if you can cover both bases why not?

And, as previously mentioned, the other base is covered several spadesful deep.  A solid crew of six internationals at the 2:07 to 2:09 level including two of last year's top three, defending champ Patrick Makau (Kenya) and 3rd-placer Ser-Od Bat-Ochir (Mongolia/Team NTN), and 2013 winner Martin Mathathi (Kenya/Suzuki Hamamatsu AC) occupy just the region where you'd expect to see the top Japanese men coming through, with three more at the 2:11 level including Canadian national record hopeful Dylan Wykes poised to ride the train.  Two who will not have their tickets validated are Russians Yuri Chechun and Dmitri Safronov, dropped from the field following last month's ARAF suspension, but keeping his seat following last week's suspension of three-time Osaka International Women's Marathon winner and Ukrainian national record holder Tetiana Shmyrko is all-time Ukrainian #3 man Serhiy Lebed, age 40.

Before the 2004 Athens Olympics and 2008 Beijing Olympics the top Japanese man on board the train ran 2:07.  In fact, at the 2003 Fukuoka 2:07 wasn't even good enough to make the Athens team.  National record holder Toshinari Takaoka (Team Kanebo) was shut out after finishing 3rd in 2:07:59 behind two other Japanese men in the single greatest marathon in Japanese history.  2007 saw half marathon national record holder Atsushi Sato (Team Chugoku Denryoku) run an all-time Japanese #4 2:07:13.  Since Beijing Fukuoka has fallen in stature in Japan through a combination of its timing four weeks before the New Year Ekiden men's national corporate championships and the rise of the Tokyo Marathon to World Marathon Major status.  At the 2011 Fukuoka before the London Olympics Yuki Kawauchi (Saitama Pref. Gov't) was the top Japanese man in just 2:09:57 in his breakthrough year, earning public admiration and the enmity of the corporate leagues by saying that he had just been doing a training run and that it was "pretty sad that this kind of time was good enough to be top Japanese man" in an Olympic selection race.

This year again the home field is thin, made all the more so by the withdrawal of 2:08:51 man Koji Kobayashi (Team Subaru), and there is no doubt that Kawauchi comes in as the home favorite.  It's been a long year for Kawauchi with a self-inflicted string of injuries following a simple ankle sprain at the end of last December, but things finally turned around for him when he finished just out of the top 5 last month at the TCS New York City Marathon with support from JRN.  Two weeks later he exceeded his own expectations by nearly 30 seconds in finishing 5th in 1:03:11 against Japan's best collegiates at the Ageo City Half Marathon, and since then he has been more positive and talking more confidently, even brashly, then ever. 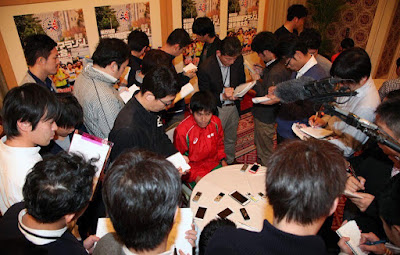 Brushing off the JAAF's ultra-realistic sub-2:06:30 standard for auto selection to the Olympic team Kawauchi said, "I'm going to run a pace that suits me personally.  One way or another I'll be in the top three.  If they still don't put me on the Olympic team for that then there's nothing I can do about it."  Talking to the Asahi Newspaper earlier this week he dropped near-Muhammad Ali levels of swagger when he said, "I've run over 50 marathons.  I've got 10 times more experience than anyone else in Fukuoka.  I'm not going to run some flaccid race just trying to be top Japanese man."  Like the urban legend has Ali saying, "It's not bragging if you can back it up."  With Kawauchi planning for this to be his last shot at an Olympic team it's time for him to prove he can.

Only one other Japanese man in the field has broken 2:10 since 2012, Satoru Sasaki (Team Asahi Kasei) with a 2:09:47 at the 2014 Lake Biwa Mainichi Marathon where, notably, he beat Kawauchi by 51 seconds.  Apart from this Sasaki's other marathons have typically been in the low teens, meaning he would need another banner day come Sunday.  Likewise for the next-best Japanese man on paper, Chiharu Takada (Team JR Higashi Nihon), mostly at the 2:11-2:16 level in his marathon career to date but breaking through with a 2:10:39 in Fukuoka two years ago and building on that with a 2:10:03 there last year.  Despite a lack of recent results a 2:09 this year would not be surprising given that progression.

Kawauchi told JRN that he thinks his biggest domestic competition will be Taiga Ito (Suzuki Hamamatsu AC), a fellow high-volume marathoner typically at the 2:12 to 2:15 level who managed two 2:11 marathons in 2013.  Respectfully disagreeing, his major competition for Rio contention may come from Kazuki Tomaru (Team Toyota).  One of only five Japanese men to win the super-competitive Hakone Ekiden Qualifier 20 km in the last 20 years, Tomaru quit running after university but later decided to join the Toyota corporate team with the single goal of making Rio.  The same age as Kawauchi, he won his marathon debut at the 2014 Nobeoka Nishi Nippon Marathon in 2:11:43, improving on that with a 2:11:25 for 10th at last year's Berlin Marathon.  Fukuoka will be his third marathon, and like Kawauchi it's do or die.

Weather conditions are currently forecast to be ideal, partly cloudy in the low-to-mid teens with 30% humidity, suggesting another spectacular weekend ahead after last week's double-barreled 10000 m national record and Aoyama Gakuin University's historic eight men sub-29 in one 10000 m race the weekend before that.  The Fukuoka International Marathon will be broadcast live nationwide on TV Asahi starting at noon on Sunday, with international broadcast available in some locales.  Keyhole TV remains a viable option if used with a paid premium key.  JRN will be on-site to cover the race live on @JRNLive.  Look for exclusive content throughout and after race weekend.

Unknown said…
Haha hi Brett that wasn't me. Thanks Mr Anonymous for the shout out and hope to catch you around, Brett! Will be at the reception today at 4pm.
December 5, 2015 at 12:48 PM