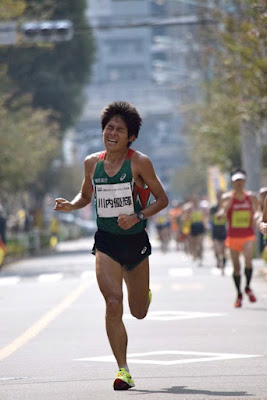 translated and edited by Brett Larner
photo by STITCHrunner

1430 people ran in the 40th anniversary Takashimadaira Road Race 20 km on Oct. 18 on a 5 km loop course in northwestern Tokyo.  Women's winner Kit Ching Yiu (Hong Kong), coached by Japan's Shinetsu Murao, set a national record 1:10:49 to win, at least her third national record on Japanese soil in the last year.  In the men's race invited athlete Yuki Kawauchi (28, Saitama Pref. Gov't) broke away on the last lap for a solo win in 1:00:57 just a week after setting a course record at the Kitakami Marathon.  His next race is the Nov. 1 TCS New York City Marathon, followed by the Dec. 6 Fukuoka International Marathon where he hopes to secure a place on the Rio Olympic team.

Kawauchi ran well in warm temperatures of 23 degrees, keeping his cool in a lead pack of five until 15.5 km just into the fourth and final lap.  "I picked it up a little and nobody could go with me," he said.  In just 4.5 km he opened a lead of 28 seconds over runner-up Koichi Miyashita (Komazawa University).

At the end of December last year Kawauchi sprained his ankle, leading to problems with his calf muscles and elsewhere.  He has only really started to recover in the last two months, saying, "I'm only back to about 85% right now."  Even so, bearing down in the home straight he told himself, "Well, let's at least break 61 minutes," before launching his powerful last kick.

As a tune-up for his upcoming marathons it was a solid performance.  "The last 5 km were the fastest, so it was a good race," he said.  "In New York I want to make top 10 at the absolute least.  Masato Imai (31, Team Toyota Kyushu) was 7th there last year, so hopefully better than that.  In Fukuoka I don't want to just be the top Japanese man.  I'll be going as far as I can to win."