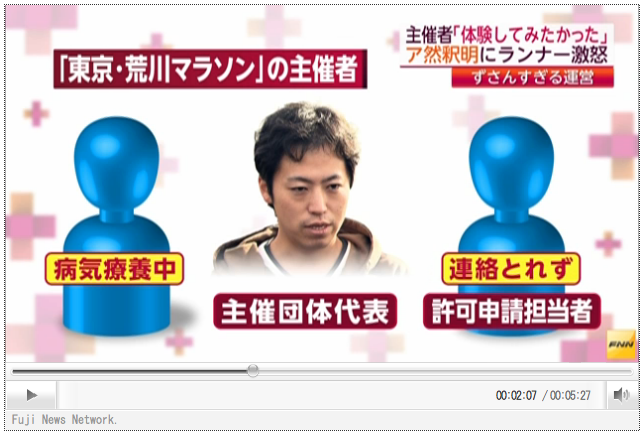 Evidence has emerged of a history of sloppy race management by the organizers of the Tokyo Arakawa Marathon scheduled for Dec. 21 but cancelled without warning two days beforehand.  A single representative of race organizers Reimei appeared at the race's staging ground on Dec. 21 to talk to the roughly 70 of 1500 entrants who arrived race morning unaware that the race had been cancelled.  "I thought that the permit applications had been filed, but right beforehand the ward office contacted us and said, 'Nothing has been filed.'"  Entrants who had turned up to run were shocked.  "This is the first I've heard about it being cancelled," said one.  "This is a scam, isn't it?"  Another said, "Usually at a race there would be lots of volunteers and race staff, like 100 people.  This certainly looks like a scam to me."

According to the representative, the organizing group was made up of just three people.  The group's official name is "Reimei Non-Profit Organization," but it is not listed as a registered NPO with official government agencies.  The address listed on the organizer's website does not belong to them, but is a virtual office service that allows people to rent the Tokyo address and phone number required to open a business in Tokyo.  Any telephone calls or other communications would be forwarded directly to the service's clients.  According to the virtual office management, the members of Reimei had never been to the address.

Although the group collected roughly 5 million yen [$42,500 USD] in entry fees from the 1,500 entrants they never filed the necessary permit applications, and the representative said that he had not been able to contact the other two members after the race's cancellation.  "The goal wasn't to make money," he said.  "We just wanted to have the experience of trying to put on a marathon however we could."

Reimei began organizing the race in October, two months before race date.  According to an event company that organizes other races, a marathon the scale of the Tokyo Arakawa Marathon would normally require four months preparation at an absolute minimum.  The Reimei representative told members of the media, "We've put on about ten races before."  In June, 2013, Reimei organized the Koto Arashiyama Marathon.  Online post-race comments from participants complained of very sloppy race management, saying, "The course was only a 2 m wide cycling road and I kept running into oncoming runners who had already gone around the turnaround point."  "The bib numbers were just ordinary photocopies.  When I started sweating after a few km they disintegrated and were totally meaningless."

The representative said that the organizers were planning to refund entry fees around mid-January but were still considering the best way to process refunds.  However, the operators of the Runnet online entry site used by Reimei stepped forward to say that they would issue refunds to entrants themselves.  Runnet, Japan's leading race entry site with 1,700,000 registered users, provides online entry services to a large number of races across the country, handling entrants' applications and fees.  Although Reimei said that it would issue refunds in January, many entrants contacted Runnet saying, "The organizers can't be trusted."  Runnet operators R-bies Inc., of Shibuya, Tokyo, indicated in a notice on their website that they intend to handle refunds themselves.  "The decision to cancel the race was the organizers', but we want to help protect all those who entered.  Ordinarily refunds would be organizers' obligation, but in this case we will take special measures to help the runners who entered this race.  We are considering the best way to handle refunds."  R-bies Inc. had already paid 1 million yen to Reimei but still holds the remaining 4 million yen.

One Tokyo Arakawa Marathon entrant who said he uses Runnet around once a month said, "I thought that because this race was on Runnet it would be done properly.  I hope Runnet does whatever they need to do to make sure this doesn't happen again."  A spokesperson for R-bies Inc. indicated that they are considering how to have stricter review of race listings, saying, "We've caused stress for our registrants and want to correct that problem as soon as possible."