13 in '14: Kawauchi On the Edge of Uncharted Territory 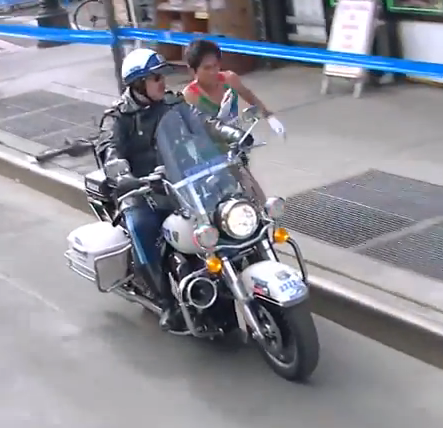 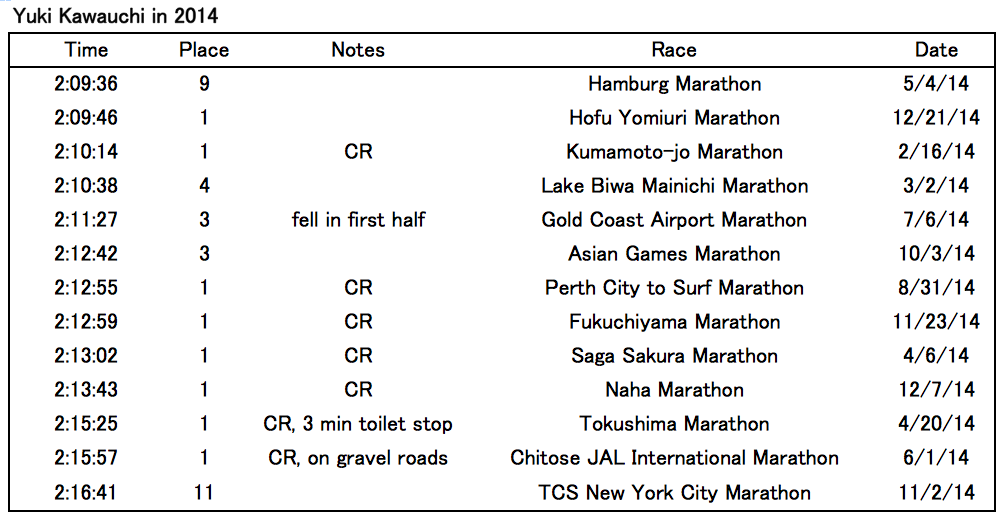 Kawauchi started off with the race he identified as his best of the year, a solo 2:10:14 course record at the amateur-level Kumamoto-jo Marathon without pacers, competitors or special drinks.  Running by feel he went far faster than planned, an effort that he paid for 2 weeks later at the Lake Biwa Mainichi Marathon where he ran only 2:10:38, but the experience gave him the confidence that he could run 2:09 completely on his own.  Based more on his 2013 season than on these results, he was chosen as one of the 12 members of the Federation's new National Team training program. 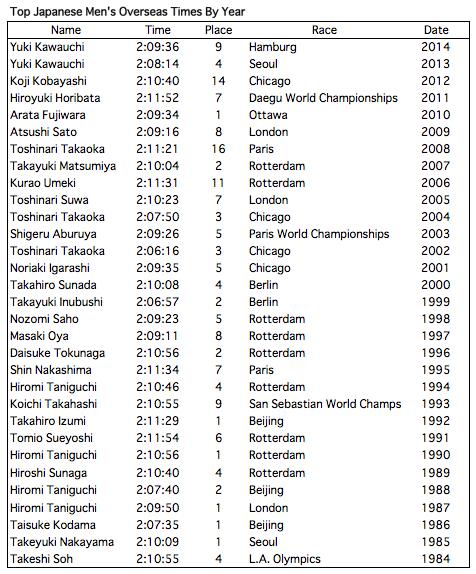 Two more course record wins at amateur races, one including a 3-minute pit stop, led him on to his first sub-2:10 of the year with a 2:09:36 time trial effort in Hamburg with support from JRN to work out the problems he has had dealing with jet lag.  Along with clearing that goal his Hamburg performance was doubly significant, giving him a Japanese record seventh career sub-2:10 and, for the second year in a row, the fastest Japanese overseas time of the year.

After a second-straight course record win at the gravel road Chitose JAL International Marathon Kawauchi ran a 2:47:27 national best for 50 km, a distance for which there is no official national record but still one of the best times ever run for that distance worldwide, at the hilly and hot Okinoshima Ultramarathon.  Expressing his sharp sense of humor within the constraints of his art he followed up 2 weeks later by winning the Saitama Prefecture 1500 m title on the track.

A favorite to join Japan's 5-man sub-2:10 overseas win club when he returned to July's Gold Coast Airport Marathon, Kawauchi suffered some bad luck with a nasty fall near halfway but gutted his way back into a 3rd-place finish in 2:11:27.  The next month he was back in Australia with a course record win at the Perth City to Surf Marathon before heading to the National Team training camp in Hokkaido where he was obliged to run a 40 km time trial just 9 days after Perth.  Curiously, nearly half of the other National Team members were allowed to skip the run.  Kawauchi finished 2nd in 2:14:52, outkicked by rival Masato Imai (Team Toyota Kyushu) near the end and showing no qualms about sharing his opinion of the time trial, Federation and the other National Team members with the media.

Kawauchi was the favorite at October's Asian Games and went in saying that if he did not win gold he would not try for a place on the 2015 World Championships team.  Despite both this and the rest of the field keying off him he was strangely passive throughout the race.  With his experience at Kumamoto-jo and elsewhere behind him he could easily have taken the reins and forced the pace, but instead he stayed doggedly behind Kenyan Bahraini Aadam Ismail Khamis no matter how slow the pace got and entirely missed the larger threat posed by debuting Kenyan Bahraini Ali Hassan Mahboob.  Mahboob duly took advantage of the slow race to outkick both Kawauchi and the year's fastest non-African Kohei Matsumura (Team Mitsubishi Juko Nagasaki) on the track for gold.  It might not have ended up differently if he'd tried to run like at Kumamoto-jo, but Kawauchi's reluctance to take control suggested some further unresolved problems.

A month later again with support from JRN he did take control of a slower race, but the NYPD evidently had other ideas.  If a picture is worth a thousand words, here are six. 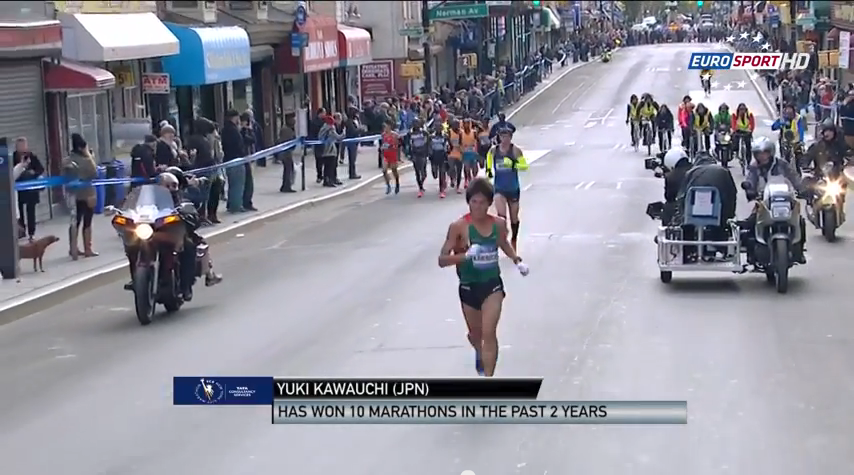 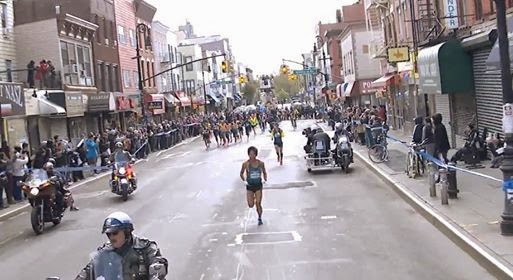 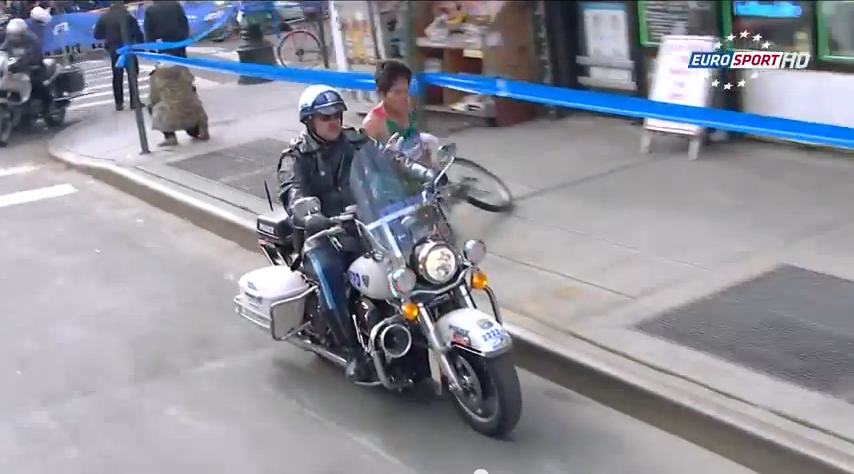 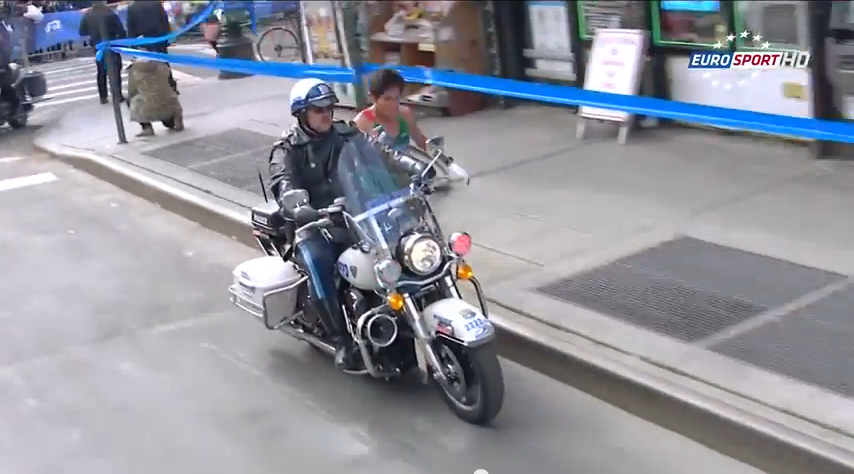 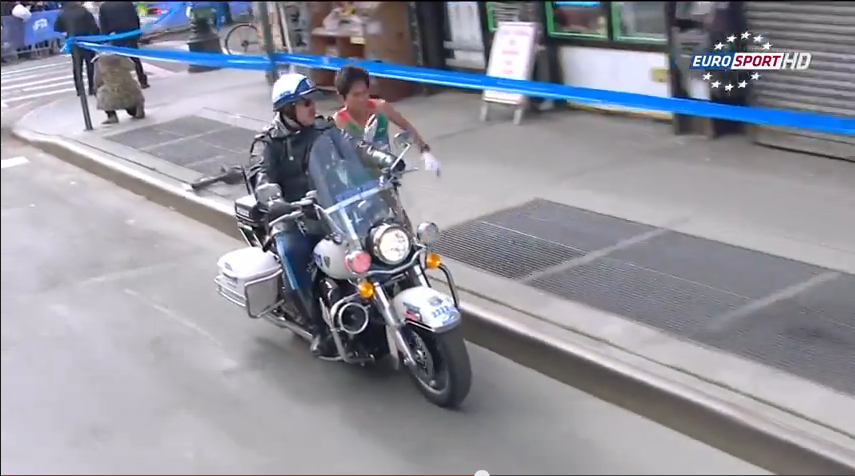 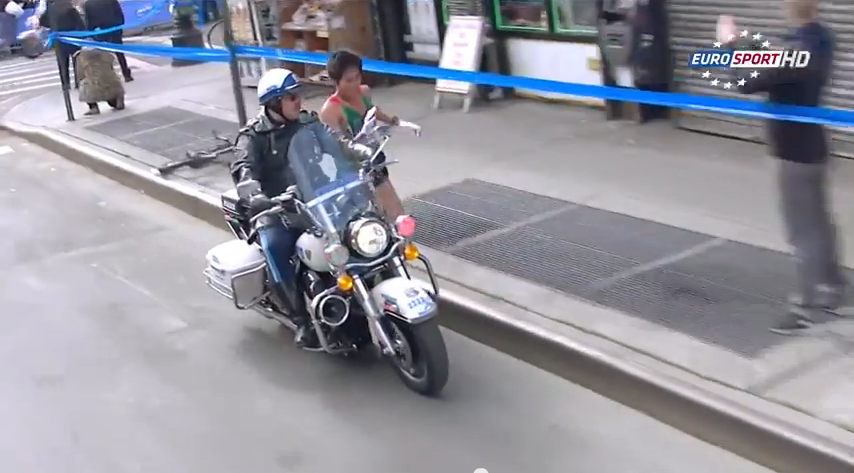 After this incident Kawauchi lost the lead he was building, ultimately ending up with his worst result of the year, an 11th-place finish in 2:16:41.  Imai, who outkicked Kawauchi at the National Team time trial, also made a break for it later in the race but escaped the close attention of New York's finest.

Bouncing back with the third-fastest half marathon of his career, a 1:02:55 at the Ageo City Half Marathon, Kawauchi set two more course records at amateur marathons, living up to his pre-Asian Games vow not to try for the World Championships team by skipping the Fukuoka International Marathon for the first time in his career.  His season-ender in Hofu was set up as a shot at 2:07, but cold weather, poor pacemaking and again a reluctance to take control of a race that was slower than planned meant only ("only") a 2:09:46 win, the only one of his eight marathon victories of 2014 that was not a course record but putting him further ahead in the record books as his eighth career sub-2:10.

What lies ahead?  Kawauchi's first marathon of 2015 is scheduled to be the Ibusuki Nanohana Marathon in Kagoshima.  It's an important race.  If he runs under 2:16 he will tie Ethiopia great Abebe Mekonnen's world records for most sub-2:17 and sub-2:16 marathons.  From there it's uncharted territory where truly no one has ever gone, each race in 2015 taking him closer to Mekonnen's other records, to the sub-2:18 record held by Sweden's Kjell-Erik Stahl, and to what may be the end of the line for his record-setting, the sub-2:11 record of 18 currently jointly held by Lee-Bong Ju (South Korea) and Tsegay Kebede (Ethiopia).  February will see Kawauchi attempt marathons on consecutive weekends for the first time with a course record shot at the elite Nobeoka Nishi Nippon Marathon on Feb. 8 followed by another at the amateur-level Kochi Ryoma Marathon on Feb. 15.  He currently plans to run at least 6 international marathons in 2015 including a return to the race where he ran his current PB of 2:08:14, March's Seoul International Marathon, for a more serious bid at 2:07.  And, at year's end, a single shot at the Rio de Janeiro Olympic team in Fukuoka.

Longer term, it's noteworthy that this year saw Kawauchi starting to talk about the end.  In Hamburg for the first time he indicated that the 2020 Tokyo Olympics are not a primary goal, saying that while he hopes to run 100 marathons by Tokyo he thinks Rio and the 2017 London World Championships will be his peak as an athlete, maybe 3 more years at his current rate, that he could see the scenario where his motivations may change after Rio and that making national teams may no longer be a priority.  Time goes by quickly.  There's no question what Kawauchi's strengths are, but he has until next December to work out some of the weaknesses that came to the surface this year.

Metts said…
These pictures sure look like something was going on with NYPD and some unkown trying to lead the race. Unknown to them not us.
December 27, 2014 at 8:47 AM

Brett Larner said…
There's disagreement about Stahl's numbers because a couple of the courses he ran those times on were found to be short on remeasurement. If you know of an official listing I'd be grateful if you post a link.
December 27, 2014 at 1:16 PM