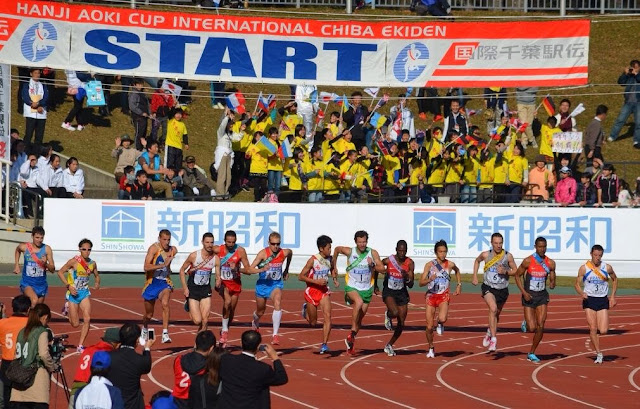 The 2013 International Chiba Ekiden lived up to expectations with a dynamic race that saw two-time defending champion Kenya make it three in a row in a course record 2:03:59 for the six-stage, 42.195 km course with a team made up of three men and three women. Kenya led wire to wire, but despite a couple of scares from 2012 runner-up Japan mid-race, Kenya managed to build a lead of over three minutes on the final two stages to seal the record-setting win.  Japan again took the silver spot in 2:07:13, with last year's 4th-placer Russia moving up to 3rd just a few meters back in 2:07:22.  The 2012 bronze medal U.S.A. team spent much of the race in the back half of the field, advancing to 5th on the anchor stage but outrun by 28 seconds by a team made up of the world's best collegiate distance runners, the Japanese University Select Team, 4th in 2:08:03.

2010 World XC champion Joseph Ebuya (Kenya) led the 5.0 km men's First Stage off a slow first lap of the track, accompanied on either shoulder by Japan's top two collegiate runners, Komazawa University's Kenta Murayama (Univ. Select Team) and Waseda University's Suguru Osako (Japan). A mid-stage change of gear dropped Osako, and when Murayama ran into trouble late in the leg Ebuya pulled away to take the stage best in 13:31.  Murayama was run down by perpetual Chiba First Stage top three man Egor Nikolaev (Russia) but came back with his characteristic last kick to take second on the stage in 13:40 by a stride over Nikolaev.

Kenya's Caroline Nyakagwa started the 5.0 km Second Stage strong, but behind her 2013 World University Games 10000 m gold medalist Ayuko Suzuki gave the kind of run that showed why she is the world's #1 collegiate long distance woman, running Nyakagwa down and pulling up to her shoulder.  Nyakagwa responded and turned on a long surge to reopen Kenya's lead to six seconds, but Suzuki, a student at Nagoya University, took the fastest time on the stage from her by three seconds in 15:31.  The surprise of the stage came a ways back as unheralded Moeno Nakamura (Chiba Pref.) ran 15:36, the third-best time on the stage, to advance Chiba to 3rd overall.  Japan's Risa Kikuchi faltered, dropping to 5th behind the strong Canada team.

Starting the 10.0 km Third Stage with a six-second lead 19-year-old Kenyan Daniel Muteti ran steadily, finishing with an eight-second lead.  Behind him came the highlight of this year's Chiba, as Japan's top man in the Moscow World Championships 10000 m, Tsuyoshi Ugachi (Japan) started in 5th three seconds ahead of last year's Chiba First Stage winner Zane Robertson (New Zealand).  Robertson immediately closed the gap, clocking 2:33 for the first kilometer with Ugachi responding in 2:36.  Working together, the pair devoured the Canadian, Chiba and University teams, going through halfway in 13:40 and 13:43 to leader Muteti's 14:06 split.  Pushing on, they came to the exchange zone eight seconds behind, crossing the line side by side and both breaking the course record with Robertson scoring the new record in 28:04, well over a minute faster than his track 10000 m best.

Little changed on the 5.0 km Fourth Stage, Esther Ndiema extending Kenya's lead over Japan to fourteen seconds as New Zealand began a backwards trajectory that carried it to 6th by ekiden's end.  Starting the stage ten second behind 4th-place Russia, Natsuki Omori brought the University Select Team another stage win as she ran 15:45 to catch Russia's Natalia Aristarkhova, both crossing the line for the handoff to the Fifth Stage simultaneously.

Like Third Stage man Muteti just 19, Kenya's Edwin Mokua rocketed a 2:30 opening kilometer split on the 10.0 km Fifth Stage.  Despite having set a course record three weeks ago at the East Japan Corporate Ekiden, Yuki Sato (Japan) was in trouble almost immediately, going through halfway in only 14:41.  Russian Anatoly Rybakov, along with his twin Evgeny a veteran of many Chiba Ekidens, pulled away from the University Select Team's Yuma Hattori to run down first Malcolm Hicks (New Zealand) and then Sato. Hattori, who set a stage record of his own last month at the Izumo Ekiden, also took down Hicks but came up three seconds short of catching Sato for 3rd.  Mokua took the stage best title in a 27:59 made more solid considering the stage's considerable hills, Rybakov next in 29:11.  The U.S.A. team made its first impact of the day as Sean Quigley outran Hattori's time by one second to take the third-fastest time on the stage in 29:19 and maintain the Americans' sixth-place position.

With a 2:19 lead to burn over 7.195 km, Kenya's anchor Emily Chebet, the 2010 and 2013 World XC gold medalist, did not take things easy.  Burning a 22:23 stage win, she brought the Kenyans home for the 2:03:59 overall course record, Kenya's third-straight Chiba title.  Japan's Sayuri Oka had her work cut out for her to give Japan silver once again, starting the stage six seconds behind Russian Liudmila Lebedeva.  Catching her quickly the pair dueled over the hills, Lebedeva pulling away on the downhills and Oka retaking the lead on the ups.  Peaking out onto the flat Oka threw in a surge that opened a gap she held to the end, giving Japan 2nd in 2:07:13 nine seconds up on 3rd-place Russia and taking the second-fastest time on the stage in 23:12.  Like Quigley, American anchor Laura Thweatt was third-fastest in 23:18, picking off New Zealand's Nicki McFadzien but far short of cathching University Select Team anchor Nanaka Izawa.

The same five teams having taken the top five spots last year with only 3rd, 4th and 5th juggling positions, New Zealand, Germany and Canada did the expected and rounded out the top eight.  9th heading into the anchor stage, Canada needed a big run from new marathon national record holder Lanni Marchant to get there, and with a 23:49 for the fifth-best time on the stage Marchant delivered, running down Australia's Tarli Bird in the late going.

All told it was the second year in a row that Chiba seemed to be operating on a higher level, with Olympic and other world-level medalists bringing performances worthy of their names, athletes from around the globe writing enthusiastically on Twitter and elsewhere about their experiences and big crowds along the course and watching the live nationwide TV broadcast.  With so much talk in other countries, especially the U.S., about the "health of the sport" and lack of interest in elite racing perhaps it's worth looking at what Japan, the one place to both make team running its focus and to enjoy mass popularity for its elite racing, is doing right.