University ekiden season kicks off in style Monday, October 14 as the world’s best collegiate teams take to the roads for the 25th running of the Izumo Ekiden. The first of the nationally-televised Big Three University Ekidens and a prelude to November’s National University Ekiden Championships, the six-stage Izumo is something of an anomaly with an average stage length of only 7.42 km, a race with an emphasis on speed over the kind of stamina required at the season-ending Hakone Ekiden.

Japanese university men’s distance running has seen an explosion in talent and performance over the last five years, something made clear by looking over the rosters of the top bracket of the twenty-two teams entered for this year’s Izumo. With only ten full-strength teams from the Kanto Region, six of them feature a six-man 5000 m average under 14:00 and five a six-man 10000 m average under 29:00. Two schools include under-23 Japanese men with 5000 m bests better than 13:30, two have sub-28 men, and three have men sub-62 for the half marathon. Meiji University boasts an incredible eleven men on its roster with sub-14 bests for 5000 m led by 20-year-old Genki Yagisawa’s 13:28.79. Where will it end? 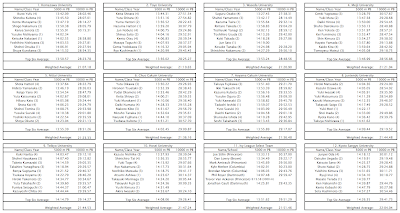 The top tier of teams at the 25th Izumo Ekiden. Click to enlarge. How does your team stack up?

Along with Meiji, defending Izumo champion and course-record holder Aoyama Gakuin University is the only other school to field at least six sub-14 men for Izumo. Despite the loss of aces Takehiro Deki and Ryotaro Otani to graduation, AGU returns with a stronger Kazuma Kubota and an overall stronger team, its average 5000 m and 10000 m times both significantly better than last year. On aggregate they come to Izumo ranked only 7th behind unheralded minors Chuo Gakuin University, but with similar positioning last year they came out on top and, with less reliance on individual star runners and the extra motivation of defending their title, they should be a frontline contender.

Last year’s runner-up and 2011 champion Toyo University also returns stronger, down slightly on 5000 m speed from last year but with its 10000 m credentials getting a major boost from identical twins Keita and Yuta Shitara’s brilliant sub-28 clockings this spring. Yuta has struggled since then and is a large question mark coming in to Izumo, but Hakone course record-holders Toyo are one of the craftiest of ekiden teams and, ranked #2 overall this year, stand a good chance of taking the title.

2012’s surprise 3rd-placer Chuo University was a DNF at Hakone this year as its Fifth Stage man Yushi Nowaki suffered hypothermia in hurricane-force winds at the peak of the mountain stage, meaning that it must run both Izumo, where it was seeded, and next weekend’s Hakone Ekiden Yosenkai qualifier to rejoin the lucky few in the world’s greatest university race. As a result, Chuo’s A-squad will be headed to the Yosenkai in Tokyo’s Showa Kinen Park next Saturday, with its JV squad representing in Izumo. Ranked 13th in the field, anything in the top ten would be an outstanding day.

Outside last year’s top three, the clear favorite to compete with AGU and Toyo for the title is 2012 National Champion Komazawa University. Down slightly in strength over both 5000 m and 10000 m from last year, Komazawa is still the best team in Japan, with six-man averages of 13:50.57 and 28:23.78. The team features four men good enough to be the star of any school in Japan, or the U.S. for that matter, and if all arrive intact it will be a rough day for the rest of the field. One of them, 2013 National University Half Marathon champion Shogo Nakamura, has reportedly been dealing with injuries over the summer, something that may not be fatal but could hurt if Toyo is close to full strength.

2010 course record-setter Waseda University features Japan’s #1 collegiate, senior Suguru Osako who gives the team’s numbers a boost with bests of 13:27.43 and 27:38.31. Junior Shuhei Yamamoto is also up there in ability and sub-14 first-years Kazuma Taira and Rintaro Takeda show promise, but beyond that Waseda’s squad falls off rapidly. The absence of 28:38.46 senior Fuminori Shikata is also a major blow to its chances. Head coach Yasuyuki Watanabe has more often than not had trouble getting his team to the starting line in peak condition, so while Waseda looks good for top five its chances of winning seem slim.

As mentioned above, Meiji University has come on strong in 2013, with eleven men now on its roster holding 5000 m bests under 14 minutes. Nine of them are entered at Izumo, meaning that Meiji could easily enter a B-team that would beat just about every other school in the field even with the absence of 13:43.20/28:41.09 junior Yuki Arimura. Its six-man 5000 m average of 13:46.99 is the best in the field, but while its 10000 m average of 28:56.88 is only the fifth-best and knocks it down to a #4 seed overall, its momentum right now, fresh from Yagisawa’s 13:28.79 two weeks ago and three other of its runners running sub-14 bests in the same race, means that Meiji could be the favorite.

2013 Hakone Ekiden champion Nittai University rounds out the front group of contenders for the win, seeded 5th overall close behind Meiji. Captain Shota Hattori has been absent from the scene since July’s World University Games and 13:56.47/28:46.38 senior Takumi Honda is out with injury, a potential double blow to its chances, but with much of the team improving its track times two weeks ago at its home time trials meet Nittai should be tough at Izumo.

Worth a mention is this year’s Ivy League Select Team, which returns to a bona-fide all-Ivy lineup after a few years of recruiting among the commoners helped it get into the top ten. Led by Joe Stilin (Princeton), Dan Lowry (Brown), Mark Amirault (Princeton) and NCAA 1500 m record holder Kyle Merber (Columbia), the Ivy League team is ranked 3rd in the field on 5000 m average with a six-man mark of 13:51.62. Unfortunately the lineup is hamstrung by a relative lack of experience over longer distances, bumping it down to a #11 seed. A placing in the top ten would be a pretty major achievement for the Americans.

Also deserving a mention as the top-ranked school from outside Kanto, the Kansai region’s Kyoto Sangyo University. Seeded #12 just behind the Ivy League, Kyoto Sangyo’s comparative weakness over 5000 m is offset by good 10000 m credentials, meaning that it could spend much of the race working with the Ivies to chase down 7th-9th ranked Kanto teams Juntendo University, Teikyo University and Hosei University.