Day Two of the 2013 Japanese National Track and Field Championships was packed with great one-on-one matchups as the country's best went after positions on the Moscow World Championships team.

In the men's 10000 m, the pace faded after starting out on track for a national record thanks to eventual last-place finisher Naoki Okamoto (Team Chugoku Denryoku).  #4-ranked Chihiro Miyawaki (Team Toyota) took over from Okamoto after falling at 3000 m, but the pace continued to slip.  The only two A-standard men, defending champion Yuki Sato (Team Nissin Shokuhin) and Suguru Osako (Waseda Univ.) reeled it out to a sprint finish for the second year in a row, and once again Sato proved the stronger over the final 50 m as he secured his place with a slower-than-expected 28:24.94 win to Osako's 28:25.84 runner-up finish. 2011's fastest Japanese 10000 m runner, Tsuyoshi Ugachi (Team Konica Minolta) took 3rd, but absent an A-standard mark he will stay home come August.

The men's javelin saw a great back-and-forth contest between 2009 Berlin World Championships bronze medalist Yukifumi Murakami (Suzuki Hamamatsu AC) and defending national champion Roderick Genki Dean (Waseda Univ.), alternating the lead position with each successive throw.  Murakami came out on top with a B-standard throw of 81.04 to Dean's sub-par 78.73, but with both have surpassed the Federation's special qualifying mark of 84.27 earlier this season they are each guaranteed a spot on the Moscow team.

The men's 100 m was the main draw of the evening for the 17000 spectators attending the Championships thanks to high school sensation Yoshihide Kiryu (Rakunan H.S.) up against London Olympian Ryota Yamagata (Keio Univ.).  As in the heats, Kiryu's start was rocky and left with a gap he could not make up.  Yamagata took the win in 10.11 (+0.7), Kiryu next but far back in 10.25.  As in the javelin, both join the Moscow team, Yamagata's A-standard win and Kiryu's having met the Federation special qualifying standard of 10.01 earlier in the season getting them into the fold. 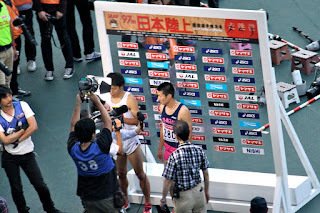 An unexpected highlight of the day came in the women's 100 m hurdles.  Lone B-standard woman and favorite Ayako Kimura (Team Edion) ran a PB and meet record 13.03, but out of nowhere independent Hitomi Shimura (Saga T&F Assoc.) ran a PB 13.02 to beat her for the record, and having won in a B-standard time she now stands first in line for national team selection.

The other unexpected highlight of the day came in the women's 400 m, where unknown high schooler Haruka Sugiura (Hamamatsu Municipal H.S.) ran a nearly two-second PB of 52.52, a new junior national record, for the win.  Sugiura fell just short of the 52.35 B-standard, but with plenty of time ahead of her she is now another young Japanese athlete to watch over coming years.

The Japanese National Track and Field Championships wrap up with tomorrow's third day of competition.  JRN will once again be on-site to cover the meet live.