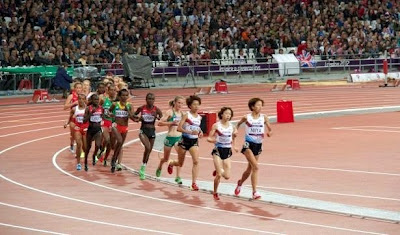 Niiya, Yoshikawa and Fukushi set the tone of the women's 10000 m.


The highlights of the first day of track and field competition at the London Olympics on the Japanese team came courtesy of two of the best people returning from the Daegu World Championships team. In the women's 10000 m, Japanese runners Kayoko Fukushi (Team Wacoal), Hitomi Niiya (Team Univ. Ent.) and Mika Yoshikawa (Team Panasonic) would have none of the slow pace the rest of the field set, breaking away as a trio to lead a 3:06 opening km, joined by Ireland's Fionnuala Britton.  Niiya, the 5000 m national champion and the greatest credit to the Japanese track contingent in Daegu, took over the lead from Fukushi after 1000 m and, showing no signs of it being only her second track 10000 m, held position until nearly 5000 m even after the Kenyan and Ethiopian contingents took the Japanese challenge seriously and moved to stay in touch.  Although 10000 m national champion Yoshikawa fell away early when the race really got moving in the second half, Niiya and Fukushi held steady as the pace shifted around them.  Niiya finished 9th in 30:59.19, almost dead on her opening split pace, becoming only the third Japanese woman to ever break 31 minutes.  Fukushi was just behind her in 31:10.35, taking 10th in her best-ever Olympic 10000 m placing.  Yoshikawa faded to 16th but held on for sub-32 with a 31:47.67 final time.

Amply demonstrating his fully operational status, Daegu men's hammer throw gold medalist Koji Murofushi (Mizuno) led Group A in the qualification round with a season-best 78.48 m on his second throw, one of only three men in both groups to clear the 78.00 m automatic qualifying mark. Only Group B leader Krisztian Pars (Hungary) threw further, with a 79.37 m, putting Murofushi in good stead for the medals.

Another of Japan's best medal hopes, Hosei University's 400 mH national champion Takayuki Kishimoto, had trouble living up to the pressure of being ranked 4th in his Olympic debut and failed to advance out of his heat.  His fellow collegiate hurdlers Akihiko Nakamura (Chukyo Univ.) and Tetsuya Tateno (Chuo Univ.) and women's 100 m national record holder Chisato Fukushima (Hokkaido Hi-Tec AC) likewise did not advance beyond the opening round.

yuza said…
It was great to see all the Japanese women have a go. Also great to see Niiya crack 31 minutes; she continues to improve.