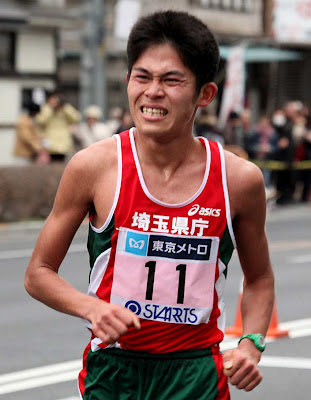 His head lolling, just before 24 km Yuki Kawauchi (24, Saitama Pref.) fell back from the second pack at the Feb. 26 Tokyo Marathon.  At the Fukuoka International Marathon he dynamically closed a gap of 23 seconds at 30 km to finish 3rd, but in Tokyo he didn't have enough energy even to make up the distance once he fell behind.  "I'm disappointed in myself that I let my confidence get shaken by not being able to get my drink bottles at 5 km and 10 km," he said after the race.  "Maybe it was a lack of preparation, or a lack of experience.....It was disgraceful."  Having run well in Fukuoka as a practice run, Kawauchi chose to run a second Olympic selection race expecting to do even better, but his Olympic quest has now ended in a disastrous defeat.

At last year's Tokyo Marathon Kawauchi qualified for the Daegu World Championships after running 2:08:37.  Ever since then the 24 year-old government worker has been surrounded by a whirlwind of attention.  He has been constantly approached by journalists, and whenever he goes to do his regular weekend training runs in Komazawa Park the cameras are clicking all around him as he runs.  "If you can't take the pressure then you'll never become a strong athlete," he said, accepting this part of celebrity as a chance for growth.

Kawauchi went into Tokyo without the slightest intention of trying to get into the Olympics just by being the first Japanese man across the line.  He did not view a time like his 2:09:57 from Fukuoka as even close to being competitive with the world's best and made it perfectly clear before Tokyo that he intended to go for a 2:07.  His position as a candidate for the Olympic team on the basis of his Fukuoka result remains unchanged, but Kawauchi is not holding on to any thought of running in the Olympics.  "If you're not good enough to be internationally competitive then you don't need to go to the Olympics," he said.  "I tried, and it's over.  Selection is based on results, and I do not think I will be picked."  Having followed his own vision and failed, even in defeat the strength of Kawauchi's character and sportsmanship shine through.

Following the race Kawauchi shaved his head in atonement for his performance.  "I felt that I had to give everyone who supported me a sign of my remorse," he said.  "It's better that my shame be exposed for everyone to see."  Click here for photos.

April 10, 2022
Japan's outdoor track season got moving with Saturday's Kanakuri Memorial Meet in Kumamoto. Mostly geared toward setting up chances for people to hit qualifying marks for this season's National Championships, the day's biggest race was the men's 1500 m . NR holder Kazuki Kawamura (Toenec) was a late scratch, but on the starting line were all-time JPN #2 Nanami Arai (Honda), U20, U18 and HS NR holder Keita Sato in his debut wearing the Komazawa University uniform, 3000 mSC NR holder Ryuji Miura (Juntendo Univ.), indoor 5000 m NR holder Hyuga Endo (Sumitomo Denko) and more of Japan's best. Sato spent most of the race up front, going through the first three laps in 56-1:55-2:55, while Endo hung back until the bell. Going right past the lead group, Endo had a lead of almost 2 seconds over Arai with 200 m to go. But in the home straight Miura launched an incredible kick that just got Endo at the line. Miura clocked 3:36.59, good for all-time JPN #2 at 1.17 sec
1 comment
Read more