On His Own Two Feet: Arata Fujiwara Faces New York 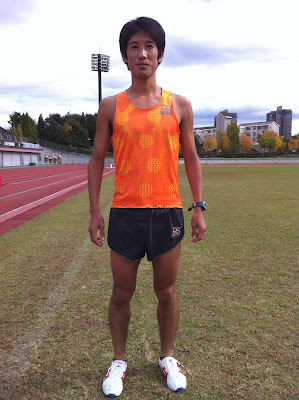 Arata Fujiwara will be the best Japanese man to have ever run the ING New York City Marathon. That’s a safe statement to make considering that the best Japanese marathoners are never able to run New York due to the demands of the regional corporate ekiden qualifiers held in early November. But Fujiwara had dreamed of running New York since his high school days in Nagasaki, and he found his own solution for the dilemma of not being able to run: despite being one of Japan’s best current marathoners, with a 2:08:40 PB, two runner-up spots at Tokyo and a 3rd at Fukuoka that put him into the Berlin World Championships, he quit his corporate team cold this spring in order to be free to race where and when he wanted. And that meant New York.

First off the bat in his new solo career was a dry run, May’s Ottawa Marathon, a race with the same time difference from Japan as New York and a similar course, hilly with a combination of sharp curves and long, straight speed stages. In his first attempt at a more technical marathon of this sort he became the first man to break 2:10 in Ottawa with a 2:09:34 course record win. In so doing he became only the fifth Japanese man to ever win an overseas marathon sub-2:10, and, notably, the first in 23 years. The others on the list are a who’s who of the biggest legends in Japanese marathoning:

It’s august company to be sure, and a demonstration of principle that helped Fujiwara secure a private sponsor, Remo System, which will ensure that he is free to train and race as he pleases through the 2012 London Olympics. It’s an unprecedented situation for a Japanese man, and while several great Japanese women including Naoko Takahashi and Yuko Arimori made similar moves the young Fujiwara can reasonably be said to be the first to do it while still on the upswing of his career.

Still in his 20’s, in the 3 1/2 years since Fujiwara’s disastrous debut at the 2007 Biwako Mainichi Marathon he has broken 2:09 once and gone sub-2:10 three times. At the same the dark half of his marathoning career has included one result in the 2:20’s and two in the 2:30’s, but with his two marathons this past spring being his two most impressive performances yet it looks as though he has plenty of potential for development.

Or does he? How much upswing, how much development still lies ahead? Stacking Fujiwara’s record up against the complete history of Japanese men’s marathoning, you can see the following:

There is a clear level that Japanese men usually reach, one sub-2:09 and three sub-2:10’s. That is exactly where Fujiwara currently stands, right on the edge of becoming a somebody. His stated goal for the 2010 ING New York City Marathon is a sub-2:08:30. History says he is probably already finished, that he has gone as far as he is going to go, but if he pulls it off he will fall on the right side of the line and join the few who have moved up to a higher level. With his 2:09:34 win in his New York test run in Ottawa, newfound freedom to set things his own way, the encouragement of appearing for the first time in a new sponsor’s uniform, and something to prove to those in power back home in Japan Fujiwara comes to with momentum, enthusiasm and motivation to take that next step.

How he would stack up in this year’s field with such a time is another question considering that world record holder Haile Gebrselassie of Ethiopia and 2009 World Champion Abel Kirui are in the field, but only twelve men have ever broken 2:09 in New York and with such a performance Fujiwara would be likely among the leaders. He has beaten Kirui before and outkicked then-2:06:15 junior world record holder and now 2:05:25 man Bazu Worku of Ethiopia by 20 seconds over the last kilometer in Ottawa. It’s a slim chance he could do it against the Emperor, but the chance is not zero and that’s what makes Fujiwara the best bet for the dark horse of this year’s race.

So here we sit on a plane, Fujiwara calm, positive, and hoping to join the winner’s club. Win or lose, should he break 2:09 in New York Fujiwara will join at least one exclusive club: The only Japanese men ever to win an overseas marathon sub-2:10, break 2:09 at least twice and break 2:10 at least four times in their careers are its two greatest, Toshihiko Seko and Takeyuki Nakayama. Number three may be on the way.

Anonymous said…
I find it very strange that you never announce that you are Fujiwara's agent!
November 4, 2010 at 9:55 AM

juamarti said…
Way to go Fujiwara!!! I'd like to watch Fujiwara fighting the first five spots...I always wanted to watch a good Japanese runner like Seko running New York, this is the time...
Good luck Fujiwara, from Mexico I will be following with interest!!
November 5, 2010 at 12:21 PM

VavahF said…
i wish fujiwara much success. looking forward to seeing him perform!
November 7, 2010 at 2:41 AM