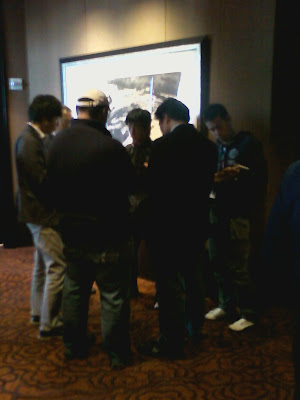 Alongside the high-profile withdrawal of world record holder Haile Gebrselassie and low-profile withdrawal of 2010 European champion Viktor Rothlin from yesterday's ING New York City Marathon, Arata Fujiwara suffered his first-ever DNF at any distance as he pulled out of the marathon at the 35 km point. Throughout the first half of the race Fujiwara ran comfortably in the lead pack through the moderately-paced 1:05:20 first half, the slowest of any marathon he has ever run. Approaching the Queensboro Bridge he abruptly experienced sharp, stabbing pain in his lower left abdomen, something more serious than a simple cramp. "That was the worst pain I've felt since my first marathon," a dejected Fujiwara told Japanese media following the race.

The pain intensified into spasms which forced Fujiwara to bend forward, disrupting his balance and leg motion and causing him to slip from the lead pack just before Gebrselassie likewise fell out of contention. Entering 1st Avenue Fujiwara tried to pull himself together to come back from behind as he did at the 2008 Fukuoka Marathon, but the muscle spasms did not relent and he was reduced to a near walk. "I thought about dropping out there but the cheering on 1st Avenue was too loud and I couldn't stop," Fujiwara commented. "Every time I slowed to a walk people shouted, 'Come on! Come on!' It sounded like, 'Gaman! Gaman!' and I was thinking, 'Man, you're a harsh bunch of people here in New York." He finally withdrew near the 35 km mark after coming back into Manhattan.

The disappointed Fujiwara, who came to New York under intense scrutiny and great pressure and expectations but with something to prove and full of optimism and motivation, hopes to make up for his unfinished business at next year's Tokyo Marathon. He sincerely hopes that Gebrselassie changes his mind about his abrupt announcement of retirement and likewise gives it another go on Tokyo's streets come February. 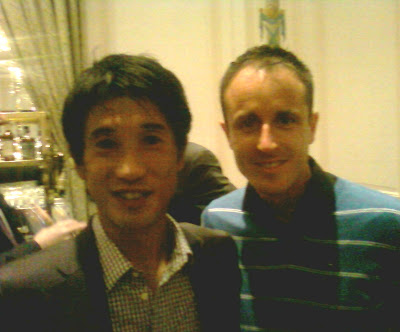 Samurai Running said…
What are you going to do? This is a tough business, marathoning.

Still as we know, many "real champions" have spotty records and it is just this, their ability to come back from crushing disapointment that separates them from the rest.

Not that the above applies to "Geb" he has done enough and deserves to have the option of stopping for good.

Anyway, please tell your boy that there is not one decent person that doesn't understand why he pulled out and everyone is wishing him a long and healthy career!
November 9, 2010 at 12:51 AM

I second Scott's comment: coming back strong after a disappointment is what true champs do.
(see Federer for another example)

TokyoRacer said…
That's a shame. But what was the problem, I wonder? Sounds more serious than muscle spasms. And muscle spasms in the lower abdomen? I hope he is able to figure out the cause and overcome it.
November 9, 2010 at 9:39 AM

Brett Larner said…
My thanks to all three of you. After a very long day yesterday I didn't have much time to write this morning before getting in my run and then catching my flight back to Tokyo, so apologies if this was not very informative. I'll probably write something more in the next couple of days.
November 9, 2010 at 9:06 PM

Juan jose Martinez said…
Brett,
Tell Fujiwara that I think he has the potential to run 2:07 in a good course.

I'll be following his career with interest...

he could be the next Nakayama...