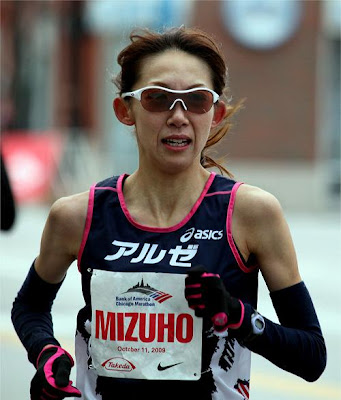 
2009 Tokyo Marathon winner Mizuho Nasukawa (Team Aruze), a former training partner of the great Naoko Takahashi, made her overseas marathon debut Oct. 11 at the Chicago Marathon. Nasukawa ran patiently in the lead pack of seven throughout the slow early stages of the race, but when the pace picked up at 33 km she was the second runner to fall off following the early departure of American record holder Deena Kastor. Nasukawa was eventually reeled back in by Kastor and finished 7th in 2:29:22, an improvement on her PW 2:34:17 at August's Hokkaido Marathon but equally far from the potential she showed when she won Tokyo in 2:25:38. Click here for complete results from the 2009 Chicago Marathon.

The young Japanese teams at the World Half Marathon in Birmingham, U.K. on Oct. 11 likewise failed to make an impact. The reliable Yurika Nakamura (Team Tenmaya) once more had the top Japanese result, finishing 12th in the women's race in 1:10:19 with young teammates Ryoko Kizaki and Remi Nakazato just behind in 1:10:32 and 1:10:40. Women's team leader Yukiko Akaba (Team Hokuren) had a showing in keeping with her performance at August's World Championships marathon, finishing 4th on the Japanese team and 26th overall in 1:12:20. Her Hokuren teammate Philes Ongori fared better, running a PB of 1:07:38 to take 2nd. Team Uniqlo's Danielle Filomena Cheyech also cracked the top 10, landing 8th in 1:09:44.

On the men's side, national record holder and team leader Atsushi Sato (Team Chugoku Denryoku) was, like Akaba, 4th on the team, 32nd overall in 1:03:25. Yukihiro Kitaoka was the top Japanese man, 21st overall in 1:02:50. Click here for complete results from the 2009 World Half Marathon Championships.