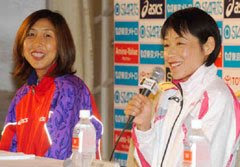 In an effort to bring the Tokyo Marathon into line with IAAF Gold Label status criteria, this year's third running is the first to feature a full international invited elite women's field. Although the women's race is not included among the selection races for the Berlin World Championships, the substantial prize money this year has attracted a competitive field both domestic and foreign rivaling that of many of the world's best events.

The overseas field is truly international, with four women from four nations, and well-matched with all but one of the women having run their best times within the last two years and less than 1 minute 20 seconds separating their times. Alevtina Biktimirova (Russia) was 2nd in both Boston and Chicago last year, the former with a memorable sprint finish in a time only 15 seconds off her best despite the challenging course. She weakened in Honolulu in December but should be a solid challenger in Tokyo. Pamela Chepchumba began marathoning after returning from a 2-year suspension in 2005, running consistenly under 2:30 for the last 3 years. Shitaye Gemechu (Ethiopia) is the only invited foreign woman without a recent marathon win, but despite a long marathon history she has a fresh PB from last year's Paris Marathon. Luminita Talpos (Romania) won last year's Vienna Marathon. She was in very poor form at February's Kagawa Marugame International Half Marathon and her fitness may be something of a question mark.

The Japanese field most prominently features the final runs of two of the country's all-time greats, Reiko Tosa (Team Mitsui Sumitomo Kaijo) and Harumi Hiroyama (Team Shiseido). Two-time World Championships medalist Tosa had the only DNF of her career at last summer's Beijing Olympics after a foot injury. Shortly afterwards she announced that she would retire in the spring, hoping to have a baby. Tosa said recently that she doesn't know if she can break 2:30 in Tokyo, but her 1:10:58 at Marugame in February, not far off her PB of 10 years ago, suggests she may just be trying to downplay expectations.

Hiroyama is one-of-a-kind, having won the 2006 Nagoya International Women's Marathon at age 37 in a strong 2:23:26. Since turning 40 last year she has dealt with constant injury problems and reports having lost fitness. She won February's Kaiyo Marathon in 2:37:19 as a training run for Tokyo, but whether she can muster herself for one last fast run is doubtful. Fans would love to see a last-run battle between Tosa and Hiroyama, unlikely as that may be.

Also on board is a third veteran, Hiromi Ominami (Team Toyota Shatai). Ominami won the 2007 Rotterdam Marathon, previously won by her identical twin sister Takami, but since then has run poorly. Her attempt to make the Berlin team at January's Osaka International Women's Marathon resulted in a 2:32:30 far back from the leaders. She will need a return to her previous form to be up front in the later stages.

More likely to be in contention is heat specialist Kiyoko Shimahara (Second Wind AC), a former teammate of Hiroyama. Shimahara was 3rd in Chicago last year behind Biktimirova, but turned things around with a win over the Russian in Honolulu in December. Known for consistency and reliability, Shimahara told JRN earlier in the week that she is in excellent shape and thinks 1st is in reach. At the same time, her times have slipped somewhat in the last 2 years and, like Ominami, she would need a minor comeback to meet this goal.

Rounding out the elite field are teammates Mizuho Nasukawa and Yukari Sahaku (Team Aruze) and debutante Ikuyo Yamashita (Team Mitsui Sumitomo Kaijo). Nasukawa and Sahaku are coached by Yoshio Koide. Neither has significant marathon experience, but Nasukawa in particular has run well in ekidens this season and may be due for a breakthrough. Yamashita, a teammate of Tosa and Osaka winner Yoko Shibui, is something of a half marathon specialist and will be hoping for a noteworthy debut within the prize money.

The closely-matched overseas field, in theory in reach of at least the four experienced Japanese women, suggests an exciting, tactical race may be in the works. The chance of Tosa and Hiroyama making it one for the ages makes this year's Tokyo Marathon something to really look forward to. The 2009 Tokyo Marathon will be broadcast nationwide on Fuji TV beginning at 9:00 a.m. on Mar. 22. International viewers should be able to watch online through one of the sites listed here. The complete field for the 2009 Tokyo Marathon is available here.