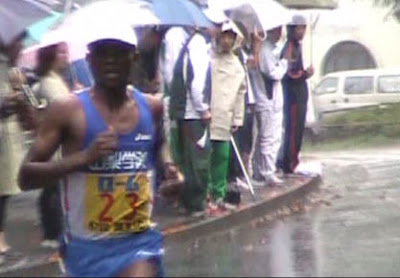 Mekubo Mogusu in the lead. Click image for video of the race.

One week after winning his third titles in the 1500 m and 10000 m events, setting a PB, meet record and Japanese university record of 27:27.64 in the latter, Yamanashi Gakuin University senior Mekubo Mogusu of Kenya broke his own course record to win the half marathon on the final day of the Kanto Regional University Track and Field Championships at Tokyo`s National Stadium.

The half marathon was contested over a ten-loop course. Beginning in the National Stadium, runners completed 1 km on the track before exiting the stadium for a hilly, twisting section on the roads. Runners then re-entered the stadium before beginning the next iteration of the road loop. The course is notoriously difficult; last year Mogusu set the course record of 1:03:10 in the midst of a year in which he broke one hour for the half marathon three times. This year competitors faced the additional challenge of rain and wind brought by the latest in a series of early-season typhoons which have buffeted Japan so far this spring. 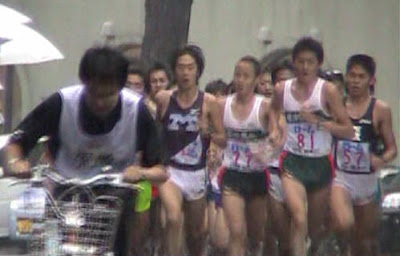 The lead bicycle struggles to stay ahead of the B-group on the road loop`s long uphill.

The B-group of 57 runners started at 9:00 a.m. sharp as a light drizzle began almost simultaneously. Three minutes later, just as the B-group approached the 1 km point, the A-group of 35 began. Perhaps not ready for the start, Mogusu, sporting a baseball cap, was immediately gapped by the rest of the A-group. Within 300 m he had overtaken the pack and moved into the lead, followed only by Komazawa Univ. junior Tsuyoshi Ugachi, who had led the Japanese pack behind Mogusu for most of last week`s 10000 m. The two runners quickly opened a gap on the rest of the field. After one loop of the road course they were far ahead of the pack, with only Nihon Univ. senior Takuma Sasaya and Hosei Univ. senior Hidehito Takamine making any attempt to bridge the distance.

Ugachi stayed near Mogusu throughout the first half of the race. Conditions worsened as the laps went by, the rain growing steadily heavier as Mogusu and Ugachi began to overtake stragglers from the B-group. Despite the rain it was clear that Mogusu was trying to set yet another course and meet record as he relentlessly targeted B-group runners. By the sixth loop Ugachi was trailing Mogusu by a gap which grew steadily larger. Likewise, Sasaya and Takamine paid for their early aggression as the rest of the pack began to pull them in. 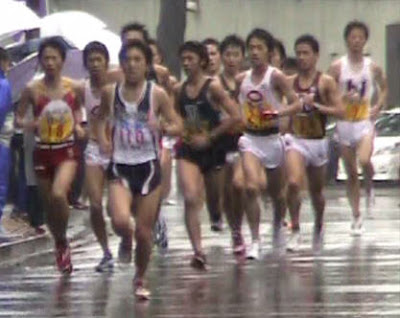 The A-group overtakes Takuma Sasaya (bib #7) and a B-group runner.

Ahead, a large pack remained together as none of the B-group runners was willing to make a break for the lead. As the rain began to lighten in the second half of the race, the half marathon became a game of whether or not Mogusu would be able to catch this pack of leaders. With one lap of the road course remaining he was approximately 100 m from the B-group pack. Tension grew as the rowdy crowd of university student spectators and more reserved track fans awaited the outcome. Six minutes later, amazed laughter and cheers of support and admiration greeted Mogusu when he entered the stadium for the final lap of the track. The cheers doubled when the top B-group runner, Chuo Gakuin University senior Shigeki Tsuji, came onto the track seconds behind Mogusu and clearly trying to kick with the Kenyan. Mogusu coasted the last straightaway to a new course and meet record of 1:02:23, while Tsuji finished six seconds back in 1:05:29.

Tsuji did not realize the precariousness of his situation. Despite coming into the stadium clear of the rest of the B-group field he was almost overtaken by Meiji Univ. junior Masamichi Yasuda. Yasuda ran a last 200 m worthy of a 5000 m race but finished a step behind Tsuji. Yasuda held his hands to his head and fell to his knees in despair at so narrowly missing the B-group win.

Ugachi was the second finisher among the A-group, but despite having built a substantial lead while running with Mogusu he was nearly overtaken by the leaders of the chase pack. It was almost a replay of the previous weekend`s 10000 m in which he finished 6th after running in 3rd place for most of the race, but this time Ugachi held on to his position, even raising his hands in joy at his 1:04:19 finish as the top Japanese runner. Waseda University junior Takahiro Ozaki was close behind in 1:04:26 for 3rd, with a pack of five more runners close behind.

Complete results from the A-group and B-group races are available from the race website. Top finishers:

Brett Larner said…
Hi, yes, a couple of people affiliated with YGU told me that was Mogusu`s plan, but he didn`t run the 5000 and wasn`t on the final start list so maybe it wasn`t really the case. YGU did field its new Kenyan student, though, a first-year named Cosmas Ondeiba.
May 27, 2008 at 1:30 PM

Roberto said…
Discretion is the better part of valor in any event (or in the case of adding a fourth event!) ...

The point of telling the story, though, was that the attempt to sweep those titles probably wasn't my smartest-ever move ...
May 27, 2008 at 7:14 PM