One Month Until the Japanese Olympic Marathon Trials 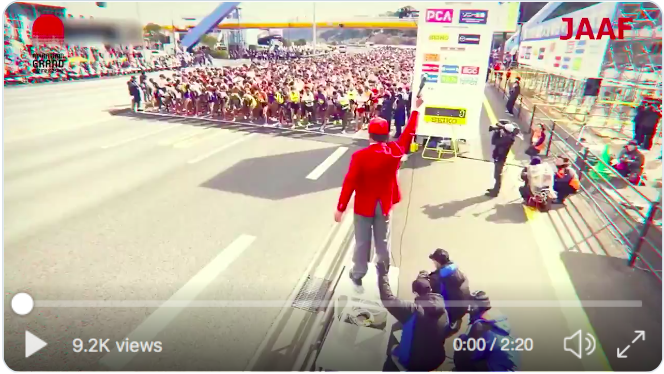 It's one month to go until what's bound to be the best marathon of 2019, Japan's 2020 Tokyo Olympics marathon trials, the Sept. 15 Marathon Grand Championship Race. Up to now Japan has typically picked its Olympic and World Championships marathon teams based on performances in a series of specific races, primarily the Fukuoka International Marathon, Tokyo Marathon and Lake Biwa Marathon for men, and the Saitama International Marathon, Osaka International Women's Marathon and Nagoya Women's Marathon for women. This time around they're going with a U.S.-style one-shot trials race, the MGC Race.

People had a nearly two-year window from August, 2017 to April this year to hit tough standards to qualify. Only 34 men and 15 women made it, and after withdrawals for the Doha World Championships the MGC Race's final entry list is just 31 men and 12 women. Swedish Athletics Federation official Lorenzo Nesi called it "the most difficult marathon race ever to qualify for." And making the Olympic team in that race is going to be even harder. 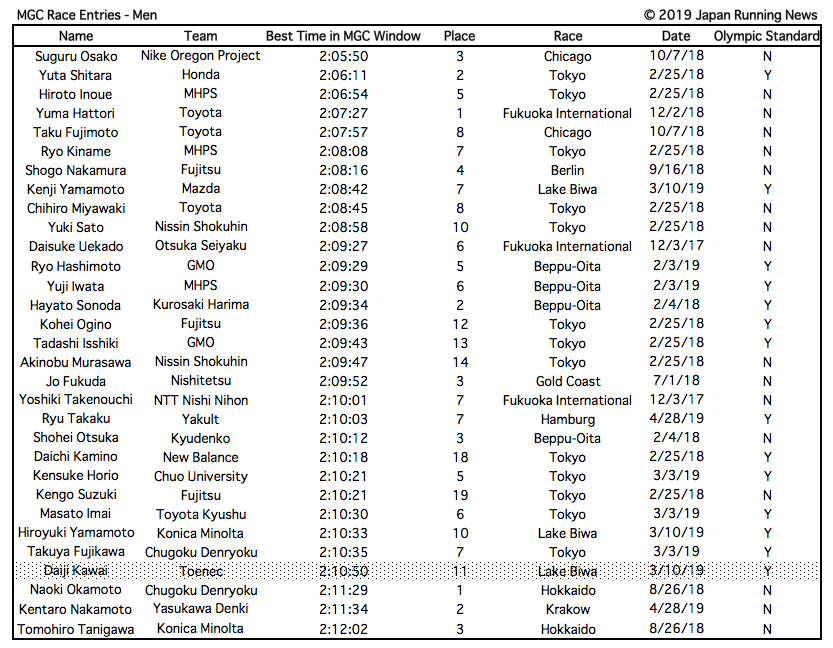 The first 2 finishers in the men's and women's races will secure their places on the 2020 Olympic marathon team. The 3rd placer will be provisionally on the team, with the 4th and 5th placers provisional alternates. Provisional in that other athletes have the chance to steal the third place on the Olympic team by running 2:05:49 or 2:22:22 in one of the 6 big domestic races named above during the winter 2019-20 season. If someone pulls it off, the 3rd-place finisher at the MGC Race will get bumped down to alternate alongside the 4th placer, while the 5th-placer will get a handshake and pat on the back as they're shown the door.

Those times are 1 second faster than the fastest anyone ran during the MGC qualifying window. For men that would mean a new national record, which is pretty much not going to happen, so, barring injury, you can expect the top 3 at the MGC Race to be on the line in Tokyo next summer. For women  though it's not unreasonable to think someone could hit that kind of time considering that 8 have done it before including 2 in the MGC field. Over the next 3 weeks JRN will introduce you to the 43 athletes set to run that field, 2 per day, who they are, what they've done, and how they look heading into the race. 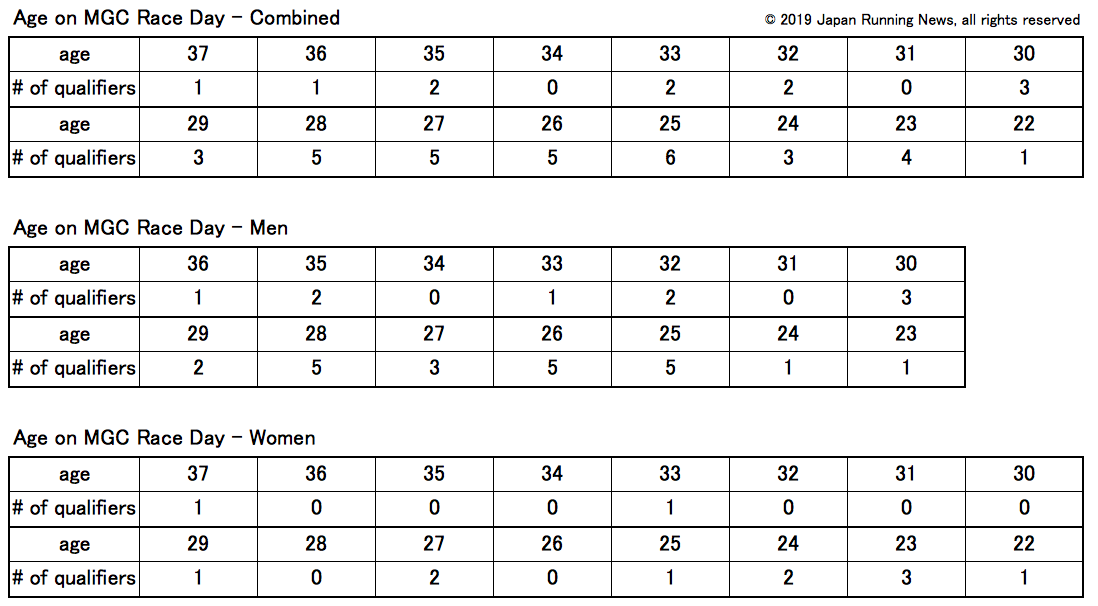 Looking at them en masse to start with, it's overwhelmingly a younger set. 22 of the 31 men and 10 of the 12 women are under age 30. 18 of the 31 men are between age 25 and 28, with exactly the same proportion, 7 of 12 women, between age 22 and 25. Considering that 28 of the 31 men graduated from university while only 2 of the 12 women did, you can see that most of the men in the race were in university when Tokyo won its bid for the 2020 Olympics while most of the women were in high school, and that they're all hitting this 4 to 6 years after graduating. 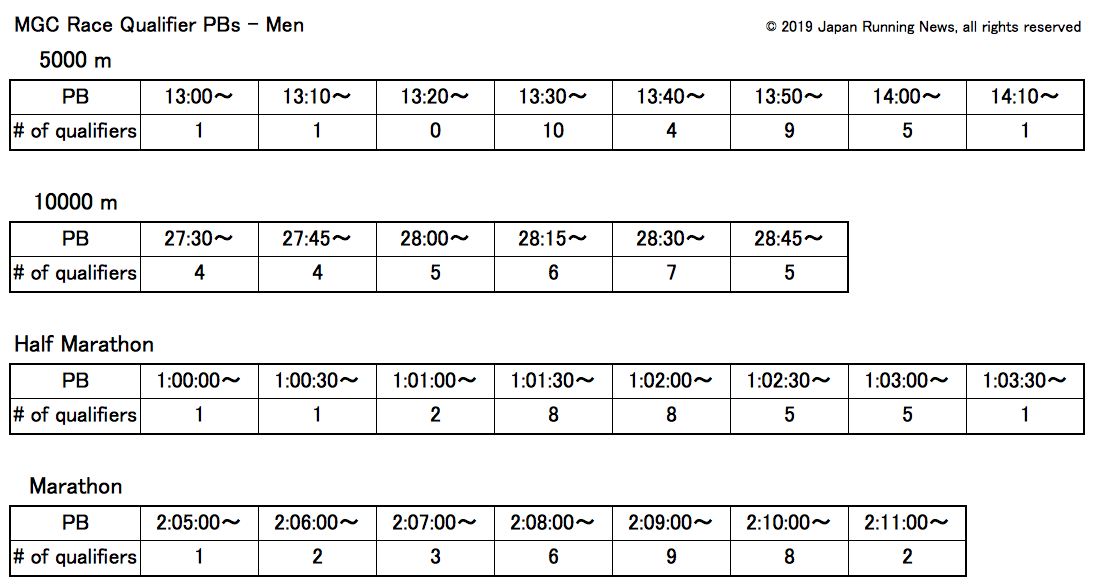 The outliers at the slow ends of the women's half marathon and marathon PB ranges are both Japan Post runners who transitioned straight from the track to the marathon, Hanami Sekine, yet to run a serious half marathon, and Ayuko Suzuki, winning her debut at last summer's hot and humid Hokkaido Marathon in only 2:28:32. Considering their times for other distances, 2:23:07 for the marathon for Sekine and 1:07:55 for the half marathon for Suzuki after her Hokkaido win, it's pretty clear that these really are outliers and that you can expect them to deliver times more in line with the rest of the field whenever they get the chance.

The Toyota men's team has more people in the race than any other with 4 entrants, although one of them is a bonus as Kensuke Horio qualified while at Chuo University, the only collegiate athlete to make it. The Fujitsu and MHPS teams each have 3 men in the race. On the women's side Wacoal tops the count with 3 women entered, although like Toyota it picked up one, Yuka Ando, by signing her after she had already qualified. Tenmaya is one of 3 teams with 2 runners but lost a third qualifier to the Doha World Championships team.

At the school level, Toyo University has the most alumni in the field with 5 men, followed by Aoyama Gakuin University with 4. Both schools dominated the Hakone Ekiden while most of their qualifiers were still running there. 4 other universities put 2 graduates in the race, while 3 men only graduated from high school. On the women's side the only university graduates are Nagoya University's Ayuko Suzuki (Japan Post) and Bukkyo University's Sairi Maeda (Daihatsu).

Toyokawa H.S. has 3 female graduates in the race, and along with Tadashi Isshiki (GMO) in the men's race its total representation is 4, making it the top high school program in the field. Saku Chosei H.S. is close behind with 3 men, its coach at the time, Hayashi Morozumi, now leading 2019 Hakone Ekiden champ Tokai University which has 2 graduates in the race. Only 3 other high schools have more than one runner in the field, Suma Gakuen H.S. being the only one apart from Toyokawa to qualify both a man and a woman. 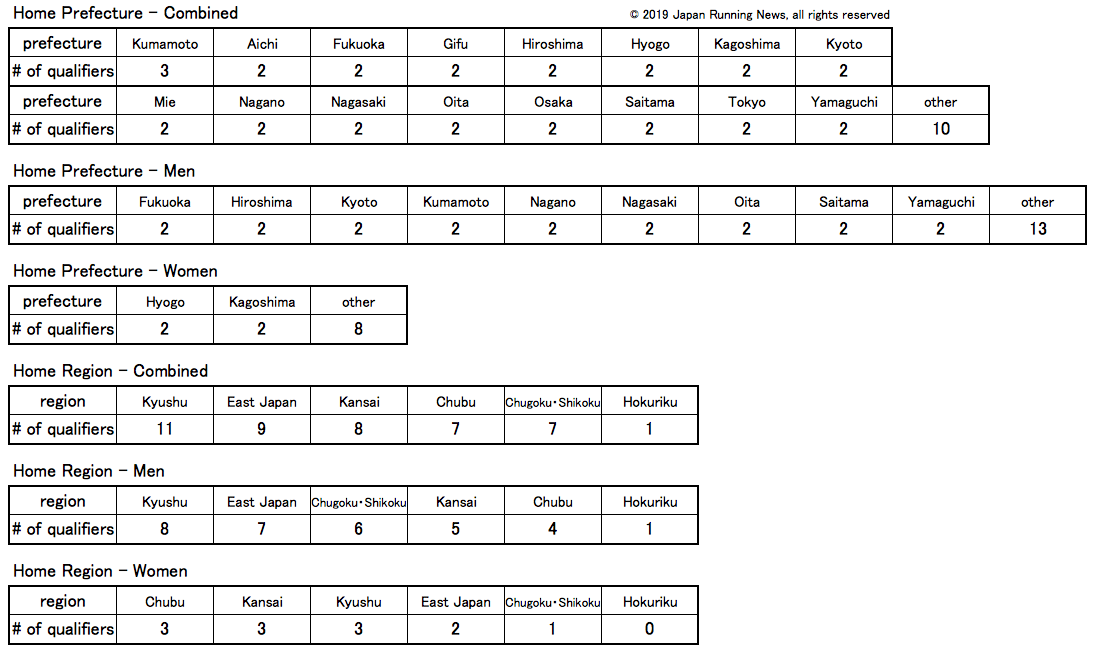 Of Japan's 47 prefectures only one, Kumamoto, is home to 3 qualifiers, with the other 40 qualifiers divided across 25 prefectures. Looking at the 6 main regions into which the corporate leagues are divided, though, it's pretty clear that the southernmost main island of Kyushu is the home of Japanese marathoning. 8 men and 3 women in the race are originally from Kyushu, more than the Tokyo-centric East Japan region, which has 7 men and 2 women in the race, the Kansai region including Osaka with 5 men and 3 women, the Nagoya-area Chubu region with 4 men and 3 women, or the Hiroshima-area Chugoku-Shikoku region with 6 men and 1 woman. Considering the populations of the East Japan, Kansai and Chubu areas Kyushu's dominance is even greater.

And with that we'll get started with the MGC Race Olympic marathon trials qualifier individual profiles. Look for the first one, Ayuko Suzuki (Japan Post), later today.

Bradley said…
No Yuki Kawauchi? I thought he had a qualifying time within the last couple of years.
August 15, 2019 at 7:33 AM

Yokohama said…
Why did Japan go with such difficult standards? Why not have made the men anyone under sub 2:10/2:12 and the women anyone under 2:30 can run the the marathon trial race? More participant etc, my opinion, makes for a better Olympic trail event. Not a mass marathon etc, not even a Fukuoka style but more participants, give more a chance to at least try and feel they are a part of it.
August 15, 2019 at 9:18 AM

Yokohama said…
There are 181 men and 341 women so far, in the US Olympic marathon trails who have qualified. Maybe my previous standards of 2:10/2:12 is still too rigid for men and 2:30 for women,for Japan. Maybe relaxing the standard even more to get more in the race. Make it a more interesting, make it in the future a race for even more. But I guess the Japan system, as always is different.
August 15, 2019 at 9:31 AM

Brett Larner said…
The U.S. trials have easier standards that make it something sub-elites and high-level amateurs can shoot for. Japan already has a lot of races like Fukuoka, Osaka and Lake Biwa that do exactly that, so its trials were designed to narrow it down to only the real contenders for the Olympic team. A few people from the bottom end of the qualifier list without much real chance of making the Olympic team opted to run in the Doha World Championships. instead of the MGC Race, With a couple of exceptions on the women's side, where I think the standards were a bit harder, just about everyone who could realistically be on the Tokyo 2020 team will be in the MGC Race, so it's pretty much doing what it was designed to do.
August 15, 2019 at 10:49 AM

Yokohama said…
I understand completely. I already knew what your response would be as I knew the reason for the rigid standards but posted anyway. Thank you! Have a nice day!
August 15, 2019 at 1:15 PM

Anonymous said…
Any ability for US people to watch? I do subscribe to TV Japan on Spectrum cable, which appears to have a lot of NHK programming.
August 15, 2019 at 11:42 PM

Brett Larner said…
This site may be a good option overseas for watching the broadcasts, which will be done by separate networks for the men's and women's races. More info closer to race date. http://tvjapanlive.com
August 16, 2019 at 8:30 AM

Andrew Armiger said…
Had the pleasant surprise of being passed a couple times on my run by Osako on Tuesday. 😀
August 18, 2019 at 9:03 AM