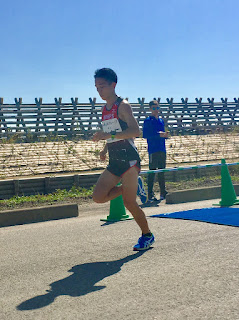 World Championships men's marathon team members Hiroto Inoue (MHPS) and Yuki Kawauchi (Saitama Pref. Gov't) both lined up in marathons again today, just under two months since representing their country in London. At the first running of the Tohoku Miyagi Fukko Marathon, a new event along the Sendai coastline washed away by the 2011 tsunami, Inoue went out at training run pace for the first half, almost four minutes behind leader Daisuke Hosomori (YKK) before picking up the pace. 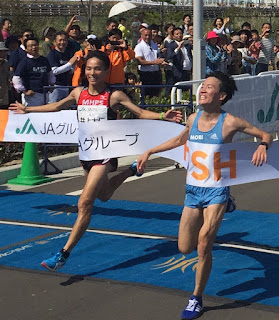 The debuting Hosomori faded over the second half, run down by amateur Taiyo Akiyama with 5 km to go and Inoue right after. Inoue made contact with Akiyama near 40 km, but rather than run away with it the 2:08 marathoner ran side-by-side with Akiyama all the way to the finish line, smiling and encouraging him on in home straight. Both crossed the line in 2:23:47, with Akiyama crowned the event's first champ.

Still going strong at age 42, the great Mari Ozaki (Noritz) ran a solo race, hitting halfway in 1:17:25 with a lead of almost three minutes over Azusa Nojiri (Raffine). Ozaki faded over the second half but had enough of a lead to take the win in 2:40:37, Nojiri next across the line in 2:43:05. A great new event designed to bring people in to one of the worst-hit areas of the 2011 disasters and to highlight the region's recovery, the Tohoku Miyagi Fukko Marathon is a welcome addition to the Japanese race calendar with a flat course promising the potential for elite-level times.

Inoue's London teammate Kawauchi ran his first race post-Worlds two weeks ago, winning Norway's BMW Oslo Marathon in 2:15:58. After a half marathon course record win in Hokkaido last weekend he was back for more, running a 2:13:43, a course record by over two minutes, to win the 39th edition of the Betsukai Pilot Marathon. "There was a pretty strong headwind in the first half and I didn't think I could get the course record," he told JRN post-race. "In the second half there was a tailwind, and that helped me get the record." Kawauchi's next marathon will be France's Nice-Cannes Marathon where he plans to go for a sub-2:10 win, followed a week later by a guest run at the local Saitama International Marathon.