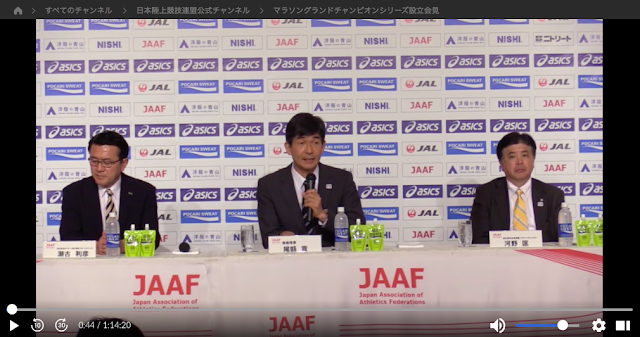 With the aim of winning medals at the Olympic Games, we will select a Japanese national team comprised of athletes who have demonstrated the capability to perform at the maximum of their abilities in key race situations and who possess the speed necessary to compete at the world level.

Based on the above organization policy, Japanese national representatives will be selected in the following order of priority.

( 2 ) From among the 2nd and 3rd place finishers in the MGC Race, the higher-placing finisher who has cleared the MGC Race Selection Time Standard.

( 4 ) The highest-ranked competitor from among athletes who clear the MGC Final Challenge Selection Time Standard.  However, this is subject to having run in (finished) MGC Series races or having qualified for the MGC Race.

( 2 ) Selection according to selection criteria ( 4 ) and ( 5 ) will be immediate upon the completion of all designated men's and women's MGC Final Challenge races.

( 2 ) MGC Final Challenge Selection Time Standard
time:     To be determined by the Development Committee following the closure of qualification for the MGC Race.  Scheduled to be announced in May, 2019.
eligible competitions:     MGC Final Challenge

( 1 ) In the event that an athlete is selected according to selection criterion ( 4 ), the 2nd or 3rd-place finisher in the MGC Race who was not selected to the Olympic Team and the 4th-place finisher will be selected as alternates.

( 2 ) In the event that no athlete is selected according to selection criterion (4 ), the 4th and 5th-place finishers in the MGC Race will be selected as alternates.

Athletes who meet the following conditions will be granted qualification for the MGC Race.

1 ) Athletes who meet either of the following two criteria in any competition certified by the IAAF as world record-eligible between Aug. 1, 2017 and Apr. 30, 2019.

4 ) If not a single athlete meets the MGC Race qualifying standards due to weather or other conditions in any MGC Series competition, the Development Committee may designate individual athletes as having run the equivalent of the standards.

( 1 ) In the event that any selected athlete is unable to demonstrate adequate fitness prior to the Olympic Games due to injury or other issues, they will be replaced on the National Team by designated alternates.

( 2 ) The above selection requirements will be confirmed pending finalization of the Olympic participation qualifications stipulated by the IOC and IAAF.

This is the JAAF's attempt to move toward a U.S.-style one-shot Olympic Trials race for the 2020 Tokyo Olympics.  To summarize, within the next two years Japanese athletes have to run sub-2:11 or sub-2:28, tweaked for a few tougher races, in major domestic marathons, sub-2:08:30 or sub-2:24 in overseas marathons, or place well at the 2017 London World Championships or 2018 Jakarta Asian Games in order to get into the Olympic Trials race, aka the MGC Race.  With a few provisions for fast times, basically the top two at the MGC Race will be named to the Olympic team.

The timing of the MGC Race during the 2019-20 winter season means that the existing series of selection races, designated above as the MGC Final Challenge, would be made irrelevant to 2020 selection.  Given that the JAAF relies heavily on those races for sponsor income, they've inserted a wildcard option for the third spot on each team to keep that season's races meaningful. Anyone who clears TBA standards that season in the MGC Final Challenge races will pick up the third spot, which will go to the 3rd-placer at the MGC Race if nobody runs fast enough.

Chris said…
Perhaps this MGC race should even be held overseas, where runners have to also prove that they can mix it up in an international field, where even splitting won't be the focus.
April 21, 2017 at 10:09 AM