For the last four years the Okinoshima Ultramarathon has been a staple on Yuki Kawauchi's schedule, a tough and hilly race held every year on Father's Day on the west coast island where his father Ashio Kawauchi was born.  This year to mark the 10th anniversary of both Ashio's passing and the race, Kawauchi was joined by both of his younger brothers, Yoshiki and Koki.  Yoshiki, a 2:22 marathoner, made his ultra debut in the 100 km division, while Koki, the youngest of the three, joined course record holder Yuki in the 50 km. 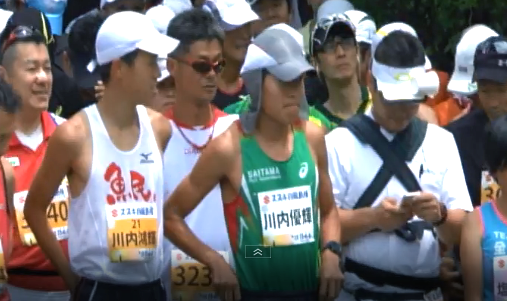 Yoshiki's day began early, the 100 km race getting going at 5;00 a.m.  6 1/2 hours later, Yuki missed his pre-race introduction to the crowds at the 50 km start and arrived at the starting line with just 4 minutes to go, Koki giving him a perplexed, "What's up?"  Last year Yuki ran 2:47:27 in Okinoshima, inside the worldwide all-time top ten.  With cool temperatures this year he went out at 2:45 pace, not quite world record material but not far off.  The hills later in the race took their toll, but he held on to run 2:48:23, the second-best of his five runs in Okinoshima and in the worldwide all-time top twenty.  Post-race he told JRN, "For the shape I'm in this was kind of a miracle, but I'm happy with it."

Koki started more conservatively, straining late in the race but holding on to cross the line in 2nd place in 3:15:20.  After going out at just over 7 hour pace in the 100 km, Yoshiki faded, then struggled.  Still gutting it out almost 2 hours after Koki was through, Yoshiki staggered home in 11:21:52, putting the finishing touch on the brothers' Father's Day tribute.