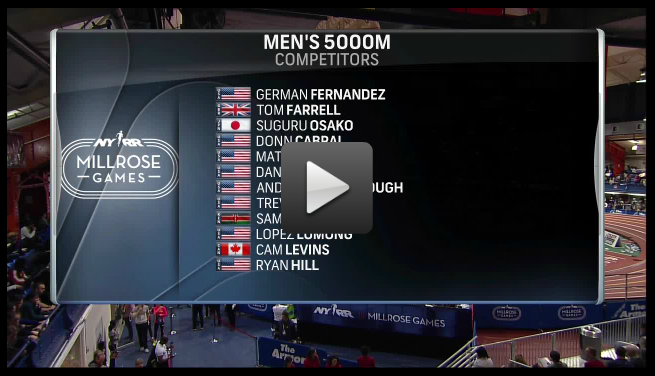 Suguru Osako (Team Nissin Shokuhin) continued to break ground as the only top-level Japanese man to base himself abroad, scoring the third national record of his tenure at the Nike Oregon Project in the Paavo Nurvi 5000 m at Saturday's NYRR Millrose Games.  Running in an exclusively Nike-sponsored field he stayed relatively steadily throughout the race, starting near the front and slipping slightly toward the read before coming back to challenge for the win.

Just 0.40 separated winner Lopez Lomong (Nike BTC), runner-up Ryan Hill (Nike BTC) and Osako, but with no official national record on the book Osako's 13:28.00 was more than enough to give him a legitimate mark to add to his outdoor 3000 m and indoor 2 mile national records.  Osako easily beat training partner Cam Levins (Nike OP), raising hopes among home ground fans that Osako will take down the longstanding outdoor 5000 m and 10000 m national records of 13:13.20 and 27:35.09 in the not too distant future.