30 Hospitalized After Honeybee Attack at Saga Sakura Half Marathon 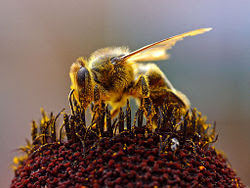 At around 11 a.m. on April 6 in Yamato, Saga, a swarm of honeybees attacked participants in the Saga Sakura Half Marathon. 30 runners were sent to the hospital after receiving severe stings, while an additional 2 runners sustained only minor stings not requiring hospitalization. Prefectural police are investigating whether the bees came from a local beekeeping farm and, if so, whether race officials took the presence of beekeepers into account when designing the course. Beekeepers within Saga Prefecture are required to register their operations, but the beekeper believed to be involved in the attack was not licensed by the prefecture.

6200 runners took part in the race, a half marathon along the Kase River. The attack took place near the 11 km point in the race. After the lead pack of competitors passed, the swarm of bees appeared and began to attack the trailing runners. Police were able to determine that honeybees were the culprits after taking victims' statements.

Camerman Kunihiro Noguchi, 42, of Fukuoka's Sawara Ward sustained stings under his right eye. Noguchi said that he encountered the swarm of bees at a spot along the course where there was a large field of cultivated flowers. "The swarm of bees appeared suddenly right in front of me," described Noguchi. "There were so many it was like the hairs on the back of my hand. It was incredible. Some women running near me were so badly hurt that they couldn't move." Runners behind those who were stung were directed on a detour to bypass the attack zone.

This was the 19th edition of the Saga Sakura Half Marathon. The course was the same as in previous years, but there have never before been problems with bee attacks. The beekeeping operation from which the bees involved in the attack were believed to come is located about 50 meters from the course. Race promoters had toured the course many times but were apparently unaware that beekeepers were based nearby. A spokesperson for principal sponsor Saga Newspapers Inc. told reporters, "We will be paying the medical expenses of all those who were injured. The goal of most amateur runners is simply to reach the finish, and we are very sorry that they could not. We will provide all assistance possible to help find the cause for these attacks."

The prefectural bureau of agriculture reported that the beekeeping operation in question was not a licensed facility, although it was registered in Saga city as an agricultural business. Prefectural police are investigating the operation's owner but caution that it will be difficult to prove eyewitness claims that the swarm came from the nearby hives.

Roberto said…
"Police were able to determine that honeybees were the culprits after taking victim's statements ... Prefectural police are investigating the operation's owner but caution that it will be difficult to prove eyewitness claims that the swarm came from the nearby hives."