Despite the late withdrawal of domestic favorite Ryoko Kizaki (Team Daihatsu), the Nagoya Women's Marathon delivered on the promise of its interesting young domestic field and accompanying seasoned internationals, answering Japan's hunger for a new women's star to pick up the legacy of days gone by with one of the best women's marathons in years. 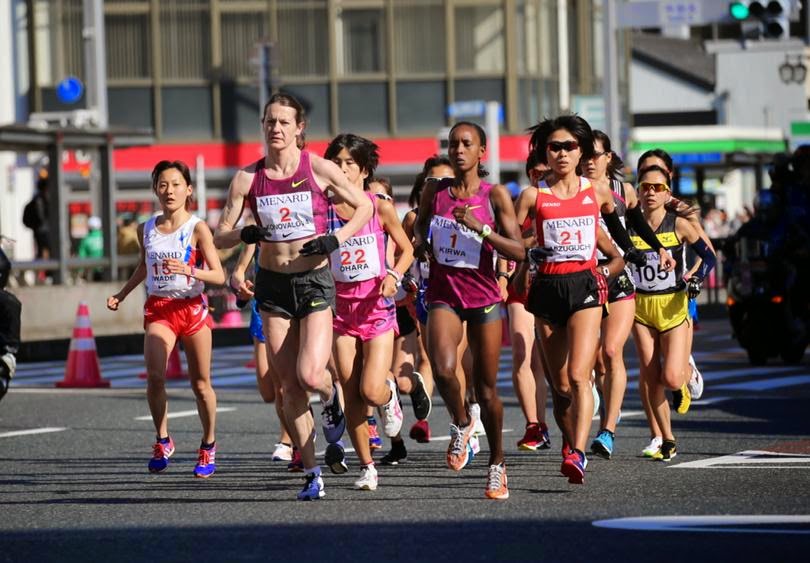 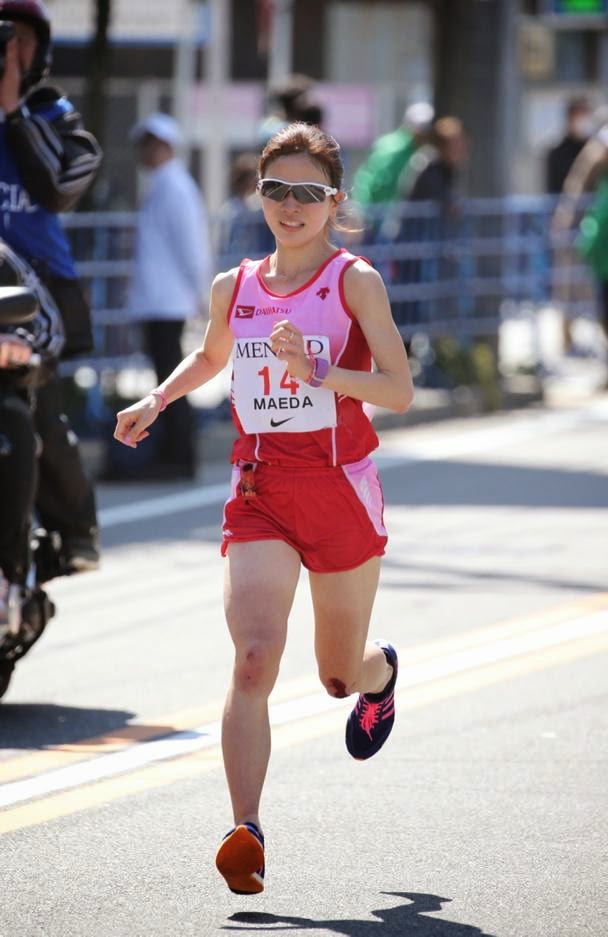 15 km came in 50:33, the toughest uphills on the course contributing to the slower 5 km split after 10 km, before the first major action came.  Heading into the 15 km drink tables, the 23-year-old Maeda, who set a collegiate national record 2:26:46 in her debut at last year's Osaka International Women's Marathon, slowed slightly to avoid clipping the towering Konovalova.  Instead she was clipped from behind by Ohara, hitting the table and going down hard and Ohara likewise tripping over her and falling.  Maeda quickly bounced up and shot back to the front of the race despite blood trickling from a large gash on her left knee and raw scrapes on her right knee.  Ohara took longer to regain contact but seemed to have it together when she did.

The jolt shook up the field, the extra energy upping the pace slightly and dropping four Japanese women from the lead group.  The 20-year-old Iwade, whose 2:27:21 debut at age 19 came just 3 1/2 months ago in Yokohama, was the next to fade, left alone as the leaders went through 20 km in 1:07:29.  With a halfway split of 1:11:08 the pace was remarkably even, keeping just below the Federation's sub-2:22:30 standard for auto selection to the Beijing World Championships Japanese women's marathon team.  While Ohara and Maeda looked to have recovered from their fall Ito, the lone experienced marathoner among the three remaining Japanese women, seemed in danger of losing touch with Kirwa and Konovalova.

Without warning Ohara came apart, slowing rapidly and looking pained as the fall 20 minutes earlier caught up with her.  Kirwa took advantage with a short surge to test Konovalova, Ito and Maeda, the Kenyan pacer going with her as Kirwa dropped a 3:17 km.  Maeda initially responded before letting go and relaxing back to the other two chasers.  Her assessment complete, by 25 km Kirwa had let them come back in time for a 1:24:15 split, 2:22:12 pace.  Ito began to struggle to keep up, losing ground at a drink table and working her way back up only to slip away again at the next table.  Kirwa and Konovalova ran side-by-side with Maeda tucked right in behind, completely composed and never letting them get a stride away.  With a 1:41:10 split at 30 km, 2:22:18 pace, the pacer dropped, and Kirwa wasted almost no time in surging to open a lead that took her on track to go just under 2:22.

Konovalova and Maeda stayed together, Konavalova applying steady pressure and finally getting a gap on Maeda at 32 km.  And with that the finish order was set, the race becoming one against the clock.  Kirwa tried to keep sub-2:22 together, never on track to break her 2:21:41 best but just skimming the line before coming into Nagoya Dome for a 2:22:08 finish, a new course record and one of the fastest times ever run in Japan.  Konavalova was steady all the way to a 2:22:27 PB for 2nd, a massive new world record for the 40+ age group. 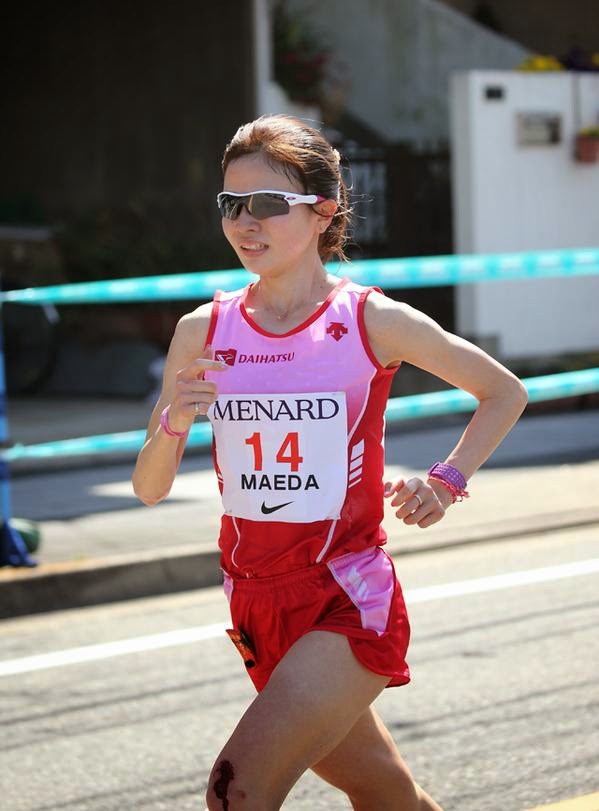 Although Maeda missed the Federation's sub-2:22:30 standard, justifiably nobody seemed to care.  Like Masato Imai (Team Toyota Kyushu) in Tokyo two weeks ago, Maeda's historic result was far and above any of the other contenders and made her a lock for the Beijing team.  Ito's time was 2 minutes faster than the top Japanese women in the other main selection races, 2:26:57 by Tomomi Tanaka (Team Daiichi Seimei) in Yokohama and 2:26:39 by Risa Shigetomo (Team Tenmaya) in Osaka, giving her a good shot at being picked over one of them especially given her status as a member of the National Team project.  The criteria by which team lineups are decided are becoming less and less clear, but however it plays out the announcement of the men's and women's teams is due out this Wednesday.  With a place on the Rio de Janeiro Olympics team guaranteed to the highest-placing Japanese man and woman to make the top eight in Beijing that's no small announcement.

yuza said…
Good run by Kirwa and Maeda. I was hoping Iwade would run a bit better, but maybe she needs more time to develop.

What can one say about Konovalova? She is like the female Chris Horner.

I do not know what you made of the commentary yesterday Brett, but I wish the main commentator (I do not know his name) would just not talk. Of course the female commentators were all really good.
March 9, 2015 at 1:53 PM

Anonymous said…
Hi Brett, great and brave run by Maeda. She overcame the rush of adrenalin plus missing her drink? after the fall (I was watching on Keyhole TV aided by your wonderful JRN Live commentary). This is the Japanese spirit I used to know.

May I throw a curly to you, Brett? My question is whether elite competitors taking part in Japanese marathons, e.g. Nagoya, Osaka, need to go through a dope test.

Brett Larner said…
Yuza--He was making a few mistakes but I still find the quality of commentary better than what you get elsewhere. Masuda is hit-and-miss for me. She knows her stuff but tends to prefer to talk about what the athlete's brother's girlfriend's dog ate for breakfast.

yuza said…
I like Masuda, though I think she tries a little bit too hard these days with those obscure facts. She has a bit of a following because of it.